The US dollar's falling relative to other currencies. Here's what that means for you, the economy and your investments.

In addition to everything else that you've found yourself worrying about in 2020 -- fire tornadoes! murder hornets! -- a weakening dollar has now entered the mix. The US dollar is currently trading about 10% lower than its March highs -- the lowest it's traded since May 2018. But before you panic, it's important to understand why the dollar is declining in value -- and whether that signals a crisis, an opportunity, or a little bit of both.

Why is the dollar falling?

Some level of fluctuations in the dollar's value is normal, and it's not always an immediate cause for alarm. In March, it was trading at its highest price since December 2017, which means that part of its subsequent decline could be due to cyclical ups and downs.

COVID-19 concerns have also pushed the dollar downward.  The United States is still struggling to contain the virus, creating an ongoing hit to the economy and doubts about whether or not the United States will be able to successfully emerge from this crisis. 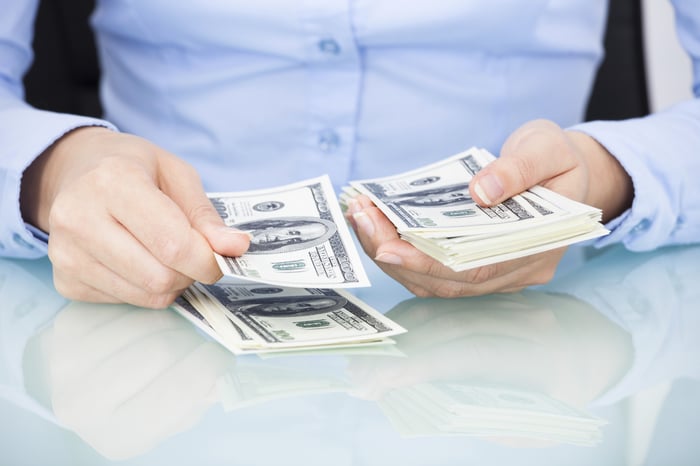 Pros and cons of a weakened dollar

As bad as a weakened dollar may sound, it nonetheless has its advantages. A weaker dollar makes US goods and services less expensive relative to other currencies, enticing other countries to want to buy more from the United States. According to economic theory, this could greatly improve economic growth, which in turn could create jobs. GDP growth has suffered its worst recorded quarter in at least 72 years, and the US job market languishes in its worst place since the Great Depression. Economic growth and more jobs could be just what the United States needs to propel it out of the economic turmoil caused by the coronavirus pandemic.

The pandemic has also hit tourism hard. Once regular travel resumes, a weakened dollar could incentivize people from other countries to come to the United States, since it'll cost less and be easier to afford. This increase in visitors could also have an excellent impact on the economy and jobs.

If a weakened dollar aids economic and GDP growth, historical data suggests your odds of finding a job may improve ,but that salary will be lower (in terms of purchasing power) than it was before. This is especially true if you are looking to purchase foreign goods or travel to a foreign place on vacation. Even if you buy most of your products locally, US-based businesses could charge more for goods if they get their supplies from foreign countries.

The dollar and the stock market

Many investors want to know what the falling dollar means to their stock portfolios. So far, the stock market hasn't tumbled alongside the dollar -- but will a continuing trend change that?

Historically, there doesn't appear to be a strong correlation between the strength of the US dollar and the way the stock market performs. The correlation coefficient measures either a positive (+1) or negative (-1) relationship between investments. The dollar has only about a 0.38 coefficient relative to the S&P 500, in part because the stock market is global and isn't solely based on how the United States performs.

This correlation assumes that the dollar doesn't keep getting weaker,  and that other countries don't lose faith in the dollar's overall strength. In the short term, the lower trading prices may entice investors and buyers for American-based companies, but in the long term, these companies may not fare so well.

How to maximize your investments

Adding a geographically diversified investment like isharesCore MSCI EAFE (IEFA -0.60%) to your portfolio will help provide a hedge against a falling US dollar, if you're feeling bearish about it in the long term. If you are bullish about the US economy and the dollar, you can use this opportunity to buy companies that operate mostly in the United States.

Undecided about where the dollar is going? You can invest in global companies that have their main operations in the United States, but operate all over the world, like Procter & Gamble (PG -1.04%).

Finally, you can consider investing in a currency ETF like GuggenheimCurrencyShares Euro Trust (FXE -0.11%), which will give you access to multiple currencies around the world. Just like stock ETFs, these passively managed funds charge low fees while diversifying your holdings.