Three of its biggest peers have already filed for bankruptcy this year.

Shares of struggling offshore oil and gas-drilling services provider Transocean (RIG -0.14%) crashed hard and fast on August 21, down almost 28% at 3:44 p.m. EDT. Today's huge drop comes a couple of days following word that Valaris (VAL), one of its biggest competitors, had finally entered into a long-expected bankruptcy proceeding.

Today, investors who've hung in with Transocean have started to fully realize how weak its prospects are, following comments from a Bernstein analyst who indicated the company's best path to maintaining its market share could be via bankruptcy. 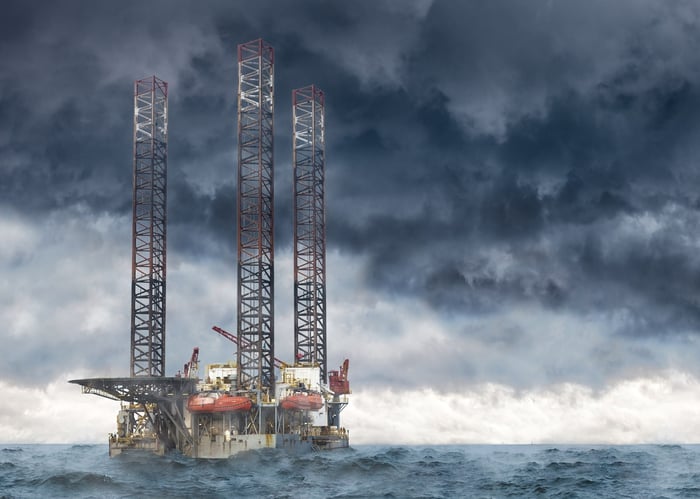 2020 has been absolutely brutal for an offshore oil subsector that entered the year still working to recover from the prior oil crash five years before. The crash in oil demand and prices, precipitated by the coronavirus pandemic and the Saudi Arabia-Russia price war in March have wiped out any momentum in offshore spending. This has caused three major bankruptcies of public offshore drillers already this year. In addition to Valaris, Noble Corp (NEBLQ) filed for bankruptcy in late July, after Diamond Offshore (NYSE:DO) kicked off the bankruptcy party in April.

In less than a decade, the offshore oil sector has destroyed enormous amounts of investor capital. Between increased big swings in oil prices and advances in producing onshore oil and gas, oil producers had shied away from the big, expensive projects offshore before the coronavirus pandemic turned global oil demand on its head.

As things stand today, Transocean likely has the best prospects of any of the handful of publicly traded offshore drillers to ride out the downturn without going through a shareholder-destroying bankruptcy reorganization. But that's not the same thing as saying it's a company worth buying right now. Being less likely than weaker peers is not the same thing as being unlikely. To the contrary, I think the odds are not in Transocean's favor to survive as a going interest without a restructuring that would likely further wipe out shareholders.

I own a (very) small interest that's lost more than 90% of its value, but I have no plans to invest another dime until and unless there's enough evidence to support Transocean's ability to ride out this downturn under its own power.

Why Transocean Stock Rallied This Week -- and Could Go Higher
420%