The video game publisher has outperformed the broader market by a wide margin so far in 2020. Should you buy one of this year's undisputed winners?

While Take-Two Interactive Software (TTWO 1.15%) is best known for its hugely popular Grand Theft Auto (GTA) franchise, the company has slowly built out its stable of video games and parlayed that into a record-setting performance last year. Even in the wake of such tough comps, Take-Two is on track to meet or exceed that high watermark in 2020.

The stock has already gained more than 40% this year, easily eclipsing the 6% gains of the S&P 500, leaving some investors thinking the low-hanging fruit has already been picked. Even in the wake of the stock's recent impressive gains, however, the best may be yet to come for Take-Two. While GTA is still the company's flagship offering, Take-Two has slowly built an impressive stable of well-known and well-respected franchises. Gamers and critics widely praised Red Dead Redemption when it was released in 2010. The follow-up, Red Dead Redemption 2, was released in 2018 and became the most critically acclaimed title for Take-Two since the release of GTA 5 in 2013 and the best-selling game over the past four years. That puts it in rare company, as GTA 5 has become the best-selling game of the past decade, while also being awarded BBC's top honors as Game of the Decade.

While Take-Two's history is an impressive one, it's the company's upcoming slate of releases that should have investors most excited. Earlier this year, Karl Slatoff, Take-Two's president, said, "Looking ahead, our company has the strongest development pipeline in its history," with 93 full-game releases over the coming five years, including 67 purchase games and 26 free-to-play titles. Slatoff also said investors should expect new releases from the company's "biggest franchises."

There's little doubt that the company is working to develop GTA VI, especially with the debut of upgraded consoles coming later this year. The newest versions of Sony's PlayStation and Microsoft's Xbox are both expected to launch in time for the upcoming holiday shopping season. With faster processors and improved graphics capabilities, Take-Two will want to take advantages of these cutting-edge capabilities.

There are plenty of other titles that could see refreshes, including BioShock and L.A. Noire, as well as new releases from Kerbal Space Program and NBA 2K21. 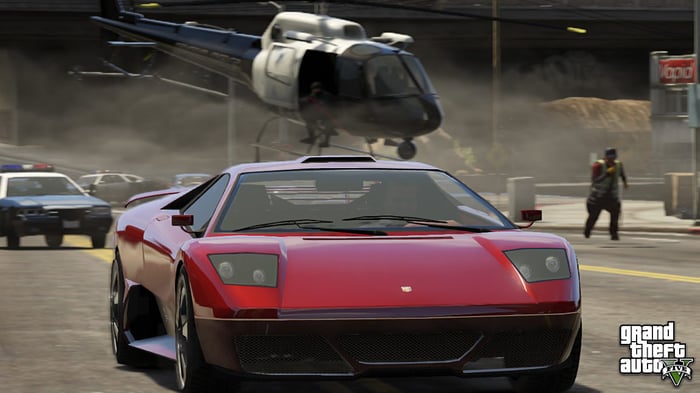 In the fiscal first quarter (ended June 30), Take-Two's net revenue grew 54%, resulting in a first-quarter record. At the same time, Take-Two was able to leverage this higher demand by sending more money to the bottom line, as earnings per share climbed 88%. The company also boosted operating cash flow by 310%.

With the economic uncertainty that abounds, a quick look at Take-Two's balance sheet shows the company operating from a position of strength, with more than $2.28 billion in cash and short-term investments and no debt. This gives the company the additional financial flexibility to make future acquisitions, while also providing Take-Two with resources to weather the ongoing financial storm.

Game publishers, particularly highfliers like Take-Two, aren't necessarily cheap, but taken in the context of the stock's performance and the company's future potential, it seems much more reasonable. Take-Two sports a price-to-earnings (P/E) ratio of 44, with an only slightly more reasonable forward valuation of 36. To put that into context, the P/E of the S&P 500 sits at about 29.

The shares don't look cheap on a price-to-sales basis, either. After falling to about 4 in late March, its price-to-sales ratio has grown to nearly 6 -- when a ratio of between 1 and 2 is considered good -- so investors clearly expect continued performance from Take-Two in the future.

To put that into perspective, analysts are expecting sales to fall about 1% in the current quarter, with sales flat for the current fiscal year, and sales growth of about 13% next year. This illustrates that the uncertainty caused by the pandemic is keeping a lid on expectations and potentially providing an opportunity for investors. 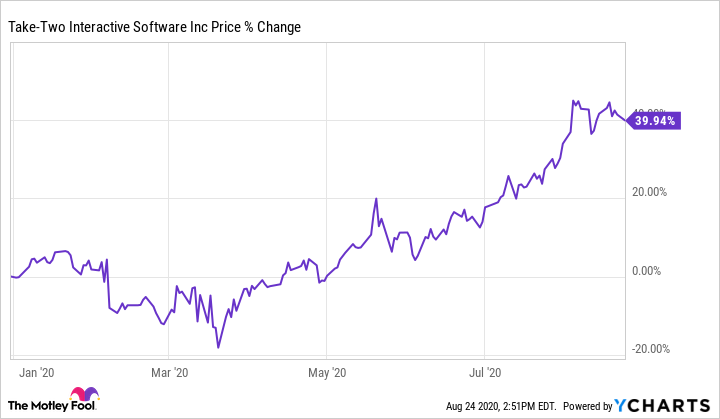 Which brings us back to the core investing question: "Is Take-Two stock a buy?" I would argue the answer is yes. The pandemic has attracted a new generation of gamers to video games, and with a growing list of popular titles and a strong slate of upcoming releases, Take-Two is making the most of its opportunity.

Given the company's long track record of success and its current execution, the future looks bright for Take-Two Interactive.