The recession brought about by COVID-19 has been a unique one. While many industries that rely on in-person interaction (travel, restaurants, entertainment) are reeling, the digital economy has gotten a boost -- both from shelter-in-place and social distancing orders and Federal stimulus payments sent directly to most households and unemployed workers.

The semiconductor industry was beginning to show signs of pulling itself out of a cyclical slump at the start of 2020, and ensuing events have pushed it into boom mode. Chip equipment and materials engineer Applied Materials (NASDAQ:AMAT) has been a big beneficiary. As it is tied to manufacturing, this stock will continue to be a cyclical one sensitive to the ebbs and flows of semiconductor demand. But at this juncture, shares look like a great value -- both for the current up-cycle in tech demand and the longer-term potential for the company's business.

During its fiscal 2020 third quarter (the three months ended July 26, 2020), Applied Materials' revenue increased 23% to $4.40 billion, and net income grew 47% to $841 million. The good times are expected to keep rolling through the summer and into the autumn, with management expecting another 23% revenue increase (at the midpoint of guidance) in the fiscal fourth quarter and earnings to increase at an even faster pace.

That puts the company on track to reach new all-time highs for both sales and profit, building on its long-term trend supplying the chip and digital display industries with equipment and new development processes. 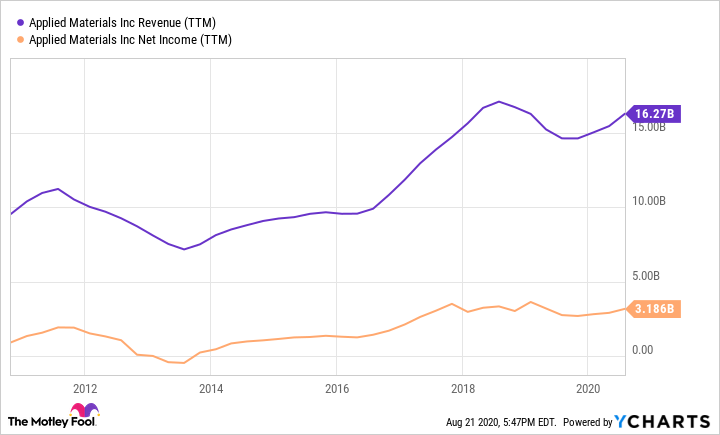 But unlike typical manufacturing, Applied Materials is also a research company responsible for developing better equipment to help its customers continuously build better chips and make technological advancements. So while its results will go through cycles, commoditization that erodes its upward trajectory isn't a risk here at this stage. As long as the semiconductor remains the basic building block for leading tech, this company is in a solid position to continue growing.

It's been a great run for Applied Materials over the last decade, as the advent of cloud computing is changing the way organizations think about their computing needs. Another decade of further development on that front lies ahead with new cloud-based applications like AI, mass storage of data, and proliferation of network connected devices growing in importance. Applied Materials could also benefit from new OLED displays that are slowly growing in market share against legacy LED screen types.

But another important development, as pointed out by fellow Fool.com contributor Billy Duberstein, is an increased emphasis on manufacturing chips in the United States. The U.S. already scoops up nearly half of global semiconductor spending, but much of the supply chain and fabrication takes place overseas. To offset China's push to make its own chips, recent legislation has been passed to lure tech hardware manufacturing back as well. If chip fabricators increase capacity and/or start building new plants in the U.S., that bodes well for Applied Materials' sales.

Paired with new tech advances, it all adds up to a compelling reason to purchase shares of this fab equipment developer (and peers like Lam Research) and forget about them for at least a few years. Since it's currently trading for just under 20 times trailing 12-month free cash flow, and given the big bump in the bottom line expected later this year, I reiterate that AMAT stock is a serious value right now for the long-term growth potential.

That isn't to say it won't be a bumpy ride along the way. As the leading edge of the technology cycle, semiconductors are and will remain a manufacturing industry susceptible to ups and downs. But a dividend yield of 1.4% will sweeten the deal for patient shareholders. Given the importance of the digital economy, those inevitable pullbacks will be reason to evaluate another purchase of Applied Materials stock, rather than reason to sell.