It's complicated, but it looks like good news for NIO investors.

What NIO plans to do with the new capital is a little complicated, but it involves some strategic moves related to its funding round earlier this year, and it looks like good news for long-term shareholders. 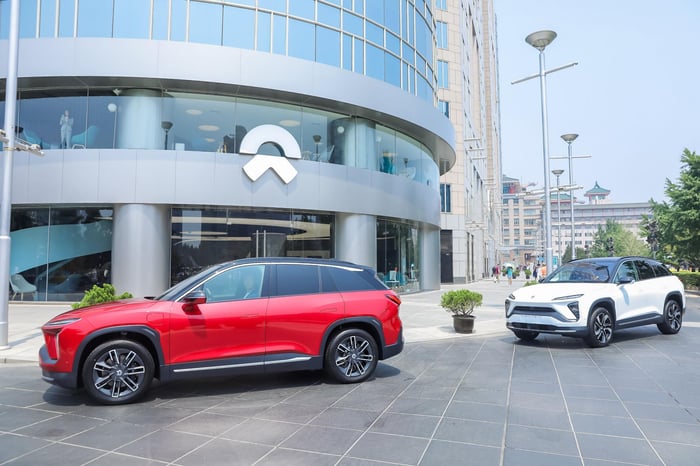 NIO gave up a lot to get a financial lifeline a few months ago. Now it wants to buy some of that back. Image source: NIO.

What NIO said about its $1.5 billion secondary offering

The offering itself is pretty simple. NIO will offer 75 million new American depositary shares, and its underwriters will have a 30-day option to purchase up to 11,250,000 additional shares. The underwriters are Morgan Stanley, China International Capital, and Bank of America Securities.

As of midday on Friday, the offering was expected to price on Friday night.

As I said, the mechanics of the offering itself are pretty simple. It's the next part (where NIO explains what it plans to do with the money) that gets complicated.

In its press release announcing the offering, NIO said: "The Company plans to use the net proceeds from the ADS Offering mainly to increase the share capital of and the Company's ownership in NIO China, to repurchase equity interests held by certain minority shareholders of NIO China, and for research and development in autonomous driving technologies, global market development and general corporate purposes."

Back in April, when it was perilously low on cash, NIO struck a deal with economic-development authorities in the Chinese province of Anhui and its capital city, Hefei. In exchange for a cash infusion of 7 billion Chinese yuan (just under $1 billion at the time), NIO agreed to relocate its operations to Hefei and to help nurture a smart-vehicle ecosystem in the city.

But there was a big catch. As part of the deal, NIO and the investors agreed to create a new corporate entity, called NIO (Anhui) Holdings (or "NIO China"). The government investors put their cash into NIO China, and -- pay attention here -- NIO agreed to transfer just about all of its assets in China to NIO China, along with some additional cash of its own. (NIO raised that cash in a secondary offering in June.)

The upshot is that as of right now, NIO owns 75.9% of NIO China, and the investors own the rest.

That's not a great deal for NIO, but it was the best deal available under the circumstances. (Remember: NIO was on the verge of bankruptcy just a few months ago.)

Now, though, with its sales back on a growth trajectory and its stock soaring, NIO wants to boost its ownership stake in NIO China, and the agreements with its investors give it a couple of ways to do that.

That's what this secondary offering is about.

NIO plans to buy back (some of) what it gave up

In a Securities and Exchange Commission filing on Thursday, NIO said that the cash raised in this offering would be used for three purposes:

Long story short: NIO had to give up nearly a quarter of its business in exchange for the cash it needed to stay afloat. Now it plans to buy some of that back.

Is this bullish for NIO?

It certainly seems bullish to me. If all goes as NIO expects, it (and the auto investors holding its stock) will soon own 86.4% of NIO China, rather than 75.9%. If nothing else, that should improve NIO's cash flow, as it will be entitled to a larger share of the cash from NIO China.

While the dilution from the offering might push NIO's share price down in the near term, I think long-term-minded NIO investors ought to be pretty happy with what's happening here.