Professional wrestler. Canadian Football League player. Actor. Movie producer. Dwayne "The Rock" Johnson has worn a lot of hats in a career that has seen him amass a $320 million personal fortune, and made him -- in the words of Forbes magazine -- "Hollywood's most bankable star."

He's also apparently one heck of an investor. 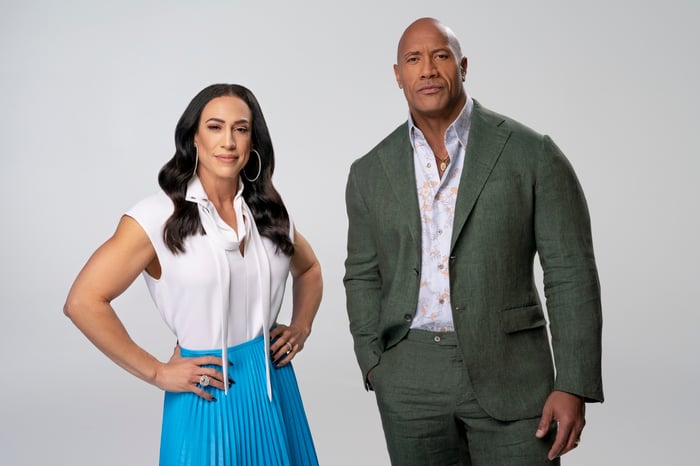 Earlier this month, Johnson teamed up with business partner Dany Garcia and RedBird Capital to buy the XFL football league out of bankruptcy for $15 million. Equal partners in the venture, Johnson and Garcia will each own 25% stakes in the XFL, with RedBird owning the remaining 50%.

In a statement announcing the purchase, Johnson explained that the XFL is "an investment for me that's rooted deeply in two things -- my passion for the game and my desire to always take care of the fans." Garcia called the deal "an incredible opportunity," while XFL President Jeffrey Pollack said the winning bid gives "a Hollywood ending to our sale process."

A (very short) history of the XFL

Founded by professional wrestling executive Vince McMahon as a "spring football league" in 2018, the XFL didn't begin playing until early 2020. The timing was unfortunate.

Just halfway into a 10-game season, COVID-19 arrived on the scene and shut down play in March. By April 13, the XFL was forced to file for Chapter 11 bankruptcy protection. At the time, the league listed $31 million in liabilities.

The $15 million Johnson and his partners will be contributing to buy the league out of bankruptcy should be enough to repay creditors about $0.50 on the dollar. After repaying those debts, though, there probably won't be anything left over for majority owner McMahon, or for World Wrestling Entertainment (NYSE:WWE), which currently owns 23.5% of the XFL's "Class B" shares.

The Rock and his partners have expressed a desire to relaunch the XFL league (possibly next spring), and if the pandemic is gone by then, their chances look good. Earlier this year, the Hollywood Reporter magazine noted that the league's TV ratings in spring were at least "decent ... with the four games on opening weekend averaging about 3.1 million viewers."

Granted, those ratings declined over time, with just 1.2 million viewers seeing the last game before the league shut down in March. But even so, as a business, the XFL didn't do half bad. By the season's halfway mark, reports XFLNewsHub, the league had already collected $19.8 million in revenue through April.

This suggests that Johnson and his partners are getting a steal of a deal on the XFL. If you recall, it was Benjamin Graham -- mentor to famed investor Warren Buffett -- who famously said that value investors seek investments where they can "buy dollars for $0.50." So how does The Rock's investment in the XFL stack up to that standard?

Paying $15 million for a franchise that did $20 million in revenue in four months already amounts to "buying dollars for $0.75." (In financial terms, we might say The Rock is paying "0.75 times sales," or a 0.75x price-to-sales (P/S) ratio. If the XFL were to finish a complete season, it's likely its sales would go even higher, and the P/S ratio would be even lower.

Is this a good price? To find out, let's compare the valuations investors give to publicly traded sports stocks -- teams and organizations that trade on the stock market.

Take the Manchester United (NYSE:MANU) soccer club as an example. According to data from S&P Global Market Intelligence, if you add up the price of all ManU shares on the stock market, the Red Devils sport a total market capitalization of $2.5 billion. Divide that "price" by ManU's $700 million in annual sales, and the stock sells for a 3.6-times P/S ratio.

Or consider the Atlanta Braves. Represented on the stock market by The Liberty Braves Group (NASDAQ:BATRA) (NASDAQ:BATRK), this major league baseball team has a $1.05 billion market cap and about $279 million in annual sales. Its price-to-sales ratio: 3.8.

Perhaps the most richly valued sports team that has ever IPO'ed is Madison Square Garden Sports Corp. (NYSE:MSGS). The owner of the New York Knicks basketball team and the New York Rangers hockey team carries a $4 billion market cap and does $600 million in annual sales -- and has a P/S ratio of 6.6.

Now admittedly, unlike WWE, the XFL is not profitable (yet). But neither are Manchester United, Liberty Braves, or Madison Square Garden Sports! Even an unprofitable sports stock, it seems, can be worth something to investors. And from all the evidence, it appears that "something" usually ranges from 3.6 to 6.6 times annual sales -- but Johnson is paying less than 1.0 times sales for the XFL.

No wonder the Rock cooked up a deal to buy the XFL. This was such a great bargain he could practically smell it.