Please ensure Javascript is enabled for purposes of website accessibility
Log In Help Join The Motley Fool
Free Article Join Over 1 Million Premium Members And Get More In-Depth Stock Guidance and Research
By James Brumley - Sep 5, 2020 at 10:30AM

The iconic retailer made a huge bet on a healthy selling environment that rivals weren't willing to match.

If there was any doubt department store chain Nordstrom (JWN 2.21%) bucked the industry's second-quarter trend by stocking up rather than scaling back on inventory, Macy's (M 5.07%) erased it on Wednesday. Like rivals Kohl's (KSS 3.70%) and Dillard's (DDS 7.69%), Macy's also slowed down merchandise receipts during the three-month stretch, by almost as much as sales fell year over year.

The disparity is an important one for Nordstrom shareholders to note. It may prove to be a brilliant decision if Nordstrom was able to sell through a big chunk of that inventory during the recently ended Anniversary Sale and then proceed to sell through more of it as we near the end of the year. If Nordstrom failed to so, though, it may stifle the chain's financial flexibility headed into 2021. 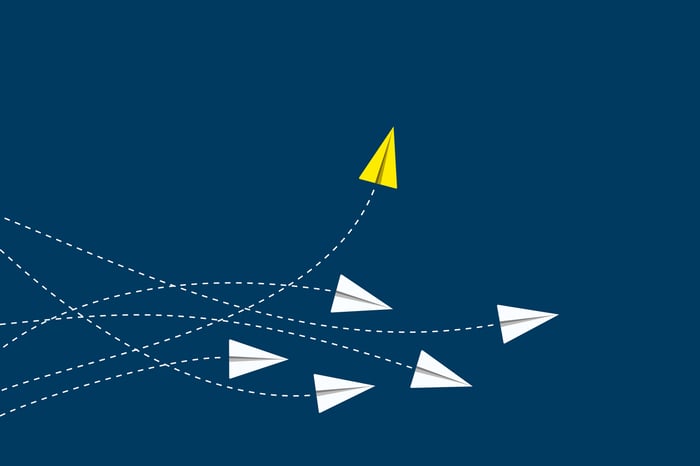 For the second fiscal quarter ended Aug. 1, Macy's net sales fell from $5.55 billion to $3.56 billion, a 36% setback that was widely expected and mirrored by other department store chains. The COVID-19 contagion has been tough for most businesses but downright brutal for retailers. In some senses, the setback is forgivable.

Making the shrinking top line even more forgivable is how much Macy's adapted in the meantime. Rather than accepting and then sitting on inventory it would struggle to sell, Macy's total merchandise-on-hand was scaled back by 27% quarter over quarter from $4.92 billion to $3.58 billion.  Macy's made the same basic decision competitors Dillard's and Kohl's did.

Yes, to its credit, Nordstrom culled inventory in a big way during the first quarter. Its rivals didn't, and in most cases probably couldn't do so as quickly as Nordstrom did. When given the choice to continue cutting back on second-quarter receipts, though, Nordstrom went the other way instead.

Unlike most of the goods carried by the likes of Walmart or Dollar General, fashion-oriented apparel has something of a shelf life. Spring goods don't sell well in summer, and summer goods don't sell well in the fall. Fall goods don't sell well in the winter. You get the idea. The longer an article of clothing sits unsold in a store, the deeper the markdown needed to sell it. Older merchandise also takes up valuable floor space, and it even ties up money that can be used to procure more marketable and higher-margin inventory. That's why, in this volatile retailing environment, most retailers are looking for ways to commit to a minimum degree of inventory -- not more.

Macy's aggressive inventory reduction was another reminder that Norsdtrom chose the riskier path headed into the current quarter by procuring goods it didn't have to.

There may have been a reason Nordstrom made the risky choice to beef up inventories despite its sharp sales drop last quarter. Its annual Anniversary Sale that normally takes place in July was pushed back to August, also pushing back the financial impact of that event from the second to the third quarter of fiscal 2020 in the hope that the coronavirus would be less of a challenge by then. CEO Erik Nordstrom even commented during the company's latest conference call held on Aug. 25, "We're in the final week of the event, and results are in line with our expectations, reflecting a notable sequential improvement in Full-Price sales trends." Exactly what that meant in fiscal terms was never divulged.

Nordstrom did say enough, however, to raise the question of whether or not maintaining inventory levels in the current environment was the right call. He further explained during the call that moving the Anniversary Sale from to the third quarter only resulted in revenue shift of approximately 10% of the usual top line in the second quarter. Subtracting 10% from last year's second-quarter net sales of $3.78 billion would have translated into a comparable sales figure of $3.40 billion, but even taking that into account, the $1.78 billion of net sales in the latest quarter was still down 45% year over year. Either way, Nordstrom experienced a much bigger sales tumble than any of its key rivals suffered.

If the company hasn't already sold through a huge chunk of the $1.47 billion of inventory it was holding as of early August, it's now going to be carrying a huge stash of summer and fall goods into the fast-approaching winter season.

If you're a Nordstrom shareholder, don't panic just yet. The company arguably has a better mechanism for shedding older "clearance" merchandise than any of its competitors. Of the 355 stores it operates, only 100 are its full-price venues. The vast majority of the remaining locations are Nordstrom Rack stores, where consumers know they can find bargain prices on goods the retailer just needs out of the way. The model seems to work well for the chain, and again, its inventory reduction effort during the fiscal first quarter certainly helped in the following period.

Even so, Nordstrom started the quarter with a lot more merchandise (relatively) than the competition did. If the Anniversary Sale was anything but outstanding, its liquidity could be crimped as we wind down 2020 and usher in 2021. In the retailing business right now, every penny counts.