The new pro football season starts on Thursday night, but fans may be hard to come by this season.

Football is in the air. The NFL season kicks off on Thursday night, and this has historically been a good time for DraftKings (DKNG 1.30%). However, with the football season literally springing up on sports fans -- there was no four-week preseason -- will fans care? Will mainstream fans and casual bettors be motivated to the point of navigating the fantasy football and sportsbook realms that will involve players they really haven't seen evolve in the offseason playing in near-empty stadiums that will blur the home-field advantage?

Last month's premiere of Hard Knocks -- the long-running HBO series that tracks a single NFL team through training camp in weekly installments -- attracted just 273,000 viewers, a brutal 61% plunge over the 705,000 that caught the prior year's first episode. Folks tuned in to watch the NFL draft on ESPN back in April, but that was when there was nothing else to do. With ratings also down in the NBA playoffs and the college football season also getting under way this week but without all of the teams participating, this isn't the live sports market at its best -- and that could be bad news for DraftKings investors. 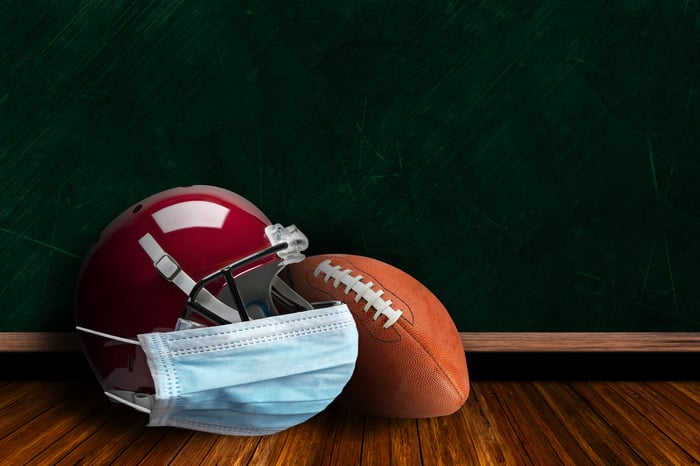 Are you ready for some football?

Friends, coworkers, and online strangers sign up for fantasy football leagues this time of year -- and that's not what DraftKings does directly, but follow me here. Just one of the three leagues I was in last year returned for the 2020 season. One of them -- a keeper league that's been around since the 1990s -- just flat-out ended when none of the 12 owners bothered to check in. Another keeper league decided to take the year off and start from scratch as a redraft league next year.

It's just not the same this season. The one league I'm in that did return for the season drafted online with a Zoom room rolling on Wednesday night, a far cry from the lively ribbing we did in person as we shared chicken wings at a restaurant last year.

These personal anecdotes may not weigh on DraftKings, and some will argue that it actually helps the bullish argument. DraftKings is about pitting individuals against the world on a weekly basis. Its growing sportsbook business is about taking wagers on individual games.

Bulls can argue that the pandemic has only made DraftKings stronger. We don't have a lot of trading history on the stock since it went public through a reverse merger back in April, but it's off to a strong start. DraftKings stunned investors -- in a good way -- in the second quarter when it generated $75 million in pro forma revenue, just below the $83 million it delivered a year earlier. Keep in mind that the NBA and MLB -- two leagues that were alive and kicking during the second quarter of last year -- didn't play a single game during the quarter. Those two seasons resumed in late July. DraftKings filled the void by turning to new fantasy and betting offerings for NASCAR, golf, European soccer, and UFC. Whether or not these products were in the works before the pandemic, the global crisis has made DraftKings a more diversified platform.

Its guidance this summer calls for pro forma revenue to climb 22% to 37% higher in the second half of the year. It has $1.2 billion in cash on its balance sheet and no debt. There is a lot to like here, but DraftKings needs to keep its eyes on the ball. Seasons can get derailed at any moment with a COVID-19 spike, and if fans lose interest now will they truly just bounce back next year even if things return to normal from an operating perspective? You can't be a keeper stock in a world that has shifted into redraft mode. This isn't a safe stock. There is potential here for DraftKings now as a public company, but the risks are higher than you probably think.