When the stock market is falling, investors naturally gravitate toward companies perceived as safer than the rest -- frequently utilities, energy, and consumer staples. However, when the coronavirus pandemic hit, many fled toward certain large-cap tech stocks. With another drop in the making, is Netflix (NFLX -1.12%) a solid safe harbor? Or will a recession cause this FAANG stock to fall hard, too?

Perhaps because of all our time at home these past months, record numbers of consumers have signed up for Netflix in 2020. This might not be a surprise, given the company's aggressive efforts to expand its market. Yet the real shocker lay in where Netflix saw a jump: Netflix had supposedly saturated the market in the U.S. and Canada, leading to naturally slowing subscriber growth rates, but in the first half of 2020, net subscriber additions in the region surged 200% compared to the prior-year period. 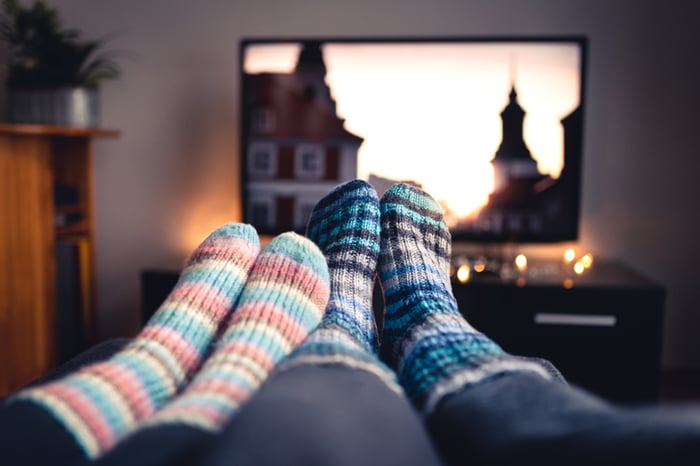 A recent Nielsen study found that many new streaming subscribers in the U.S. are of an older age cohort, 55 and over. This is important news for Netflix, since older-cohort growth is often seen as a technical sign of a service or product's ubiquity and staying power. Furthermore, 25% of U.S. adults added a new streaming service from March to June alone, and some of these may have contributed to Netflix's deepening market penetration.

Why would older people be signing up for Netflix, though? The answer is that Netflix content is currently the most engaging out there, taking up a 34% share of screen-usage time, which is even ahead of Google's YouTube. This shows that the company's content-first strategy, though costly, really seems to work.

So many choices, though

Even if Netflix were not able to further increase its North American market penetration, the company still seems well-positioned to continue dominating the streaming-video-on-demand (SVOD) market. Cord cutters have endless choices: Netflix, Amazon Prime Video, Hulu, Disney's new Disney+, Apple TV, and more. Yet, somehow, Netflix still occupied 31% of streaming time in the U.S. when everyone was cooped up indoors during the pandemic lockdowns.

In fact, a recent study by video-tracking company Reelgood states that most subscribers to other services supplement those streaming packages with Netflix. For example, 86% of Prime Video subscribers who use Reelgood also subscribe to Netflix. Of course, Reelgood users may be power streamers and therefore more likely to subscribe to multiple services, but Netflix clearly holds an attractive pull that keeps the company's estimated churn rate far below the market average of 41%. 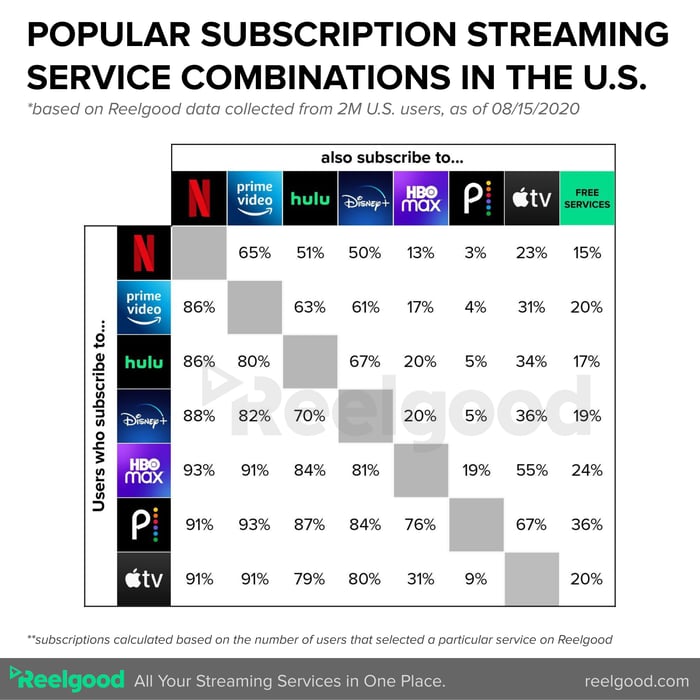 This could be due to the wild popularity of Netflix's original shows. In the second quarter of 2020 alone, 11 of the 20 most-watched shows on U.S. SVOD services came from Netflix, and eight of the 11 were Netflix originals. Again, this supports the idea that while producing Netflix original content is a very expensive endeavor, this content is what continues reeling in subscribers.

Is Netflix a safe choice?

The idea that Netflix could be a solid investment choice even in a market downturn is enticing. The company does expect its third quarter net additions to be significantly down year over year, since the pandemic caused many potential new subscribers to join Netflix earlier in the year. However, Netflix will be able to continue penetrating even supposedly saturated markets, and there appears to be no intention of slowing down original content production any time soon.

As a subscription service, one could argue that the cost of switching is non-existent, and so economic hardship would result in a rush of cancellations. However, if streaming video subscribers prefer Netflix over most other available services, then unless the economy was completely shot, Netflix service would be one of the last TV subscriptions to be cut loose. Even during the pandemic lockdowns and consequent economic uncertainty, only 2% of U.S. adults decreased the number of SVOD services they subscribed to.

All in all, when investors cycle back to tech stocks either as safer investment choices or because of bullish exuberance, Netflix stock could easily rise beyond its July high.