The Snowflake (NYSE:SNOW) IPO is top of mind on Wall Street these days. It's the latest and hottest new tech issue that's gotten investors into a frenzy, sending the stock to just under $254 on its first day, up 111% from its IPO price of $120. And with a big name like Warren Buffett as a backer, it's easy to see why there's so much hype surrounding the stock.

However, Snowflake may not be the best play right now for investors looking to buy an IPO. There's a big healthcare stock that debuted on Thursday that investors should take a closer look at: American Well, also known as Amwell.

Amwell is a Boston-based telemedicine stock that's also one of Teladoc's (NYSE:TDOC) main rivals. Demand for virtual care has been booming this year amid the coronavirus pandemic, with many patients preferring to visit a doctor digitally rather than in person. It's not just a trend among young people, either; many seniors are also using telehealth services. Healthinsurance.com conducted a survey of Medicare-eligible seniors in July and found that 61% of them "embraced technology more during the COVID pandemic," and that use of telemedicine services among seniors was up 300%. 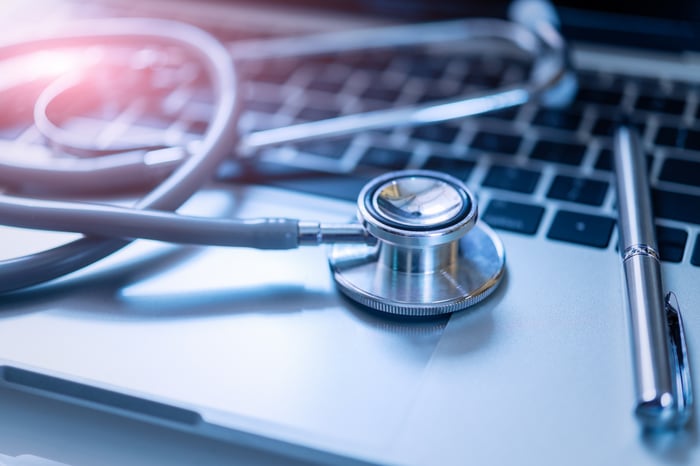 In its prospectus, Amwell reported a near-300% increase in virtual visits for the second quarter of this year compared to the first quarter, to 2.2 million from 720,000. In April, its monthly visits hit a peak of 912,000, more than double March's tally of 436,000. June's numbers tapered off to 540,000, but that's still about seven times the 78,000 visits Amwell reported in the same period last year.

This surge in traffic has generated significant sales growth for Amwell. In its Q2 results, through the end of June, sales of $68.6 million were nearly double the $35.4 million the company reported in the same quarter last year. Amwell still has a long way to go in catching rival Teladoc, which posted sales of $241 million during its most recent quarter covering the same period. And the delta between the companies' top lines is likely to get even bigger thanks to Teladoc's merger with Livongo. The $18.5 billion deal will help expand both companies' services to reach even more patients. In Livongo's most recent quarterly results (also through June 30), its sales reached $91.9 million.

But with Amwell offering a competitive product that costs as little as $79 before insurance (Teladoc's Everyday Care is $75 a visit for people without insurance), there's still lots of potential for the company to chip away at more market share, especially as it makes more of a name for itself now that it's public. Being a smaller player in the industry may also make Amwell's stock more appealing to investors who want to get in early on what may be the next big healthcare stock.

One advantage that Amwell enjoys over its key rival is the backing of tech giant Google, which is owned by Alphabet (NASDAQ:GOOG)(NASDAQ:GOOGL). Google is investing $100 million into Amwell and plans to work closely with the virtual care provider. Amwell will use the Google cloud for some of its business, and the two companies will work together on technology and sales. Having a big name like Google backing Amwell could entice more people to use its services.

Why Amwell is a better option than Snowflake

Investors should be a little hesitant to invest in Snowflake because of the competition it faces, despite its strong sales numbers. The data storage and analytics company generated revenue of $242 million over the six months ending July 31, for a year-over-year growth rate of 133%.

But growing that market share may not be easy, with competition for cloud-based services coming from Google, Microsoft, and Amazon -- and it doesn't necessarily help that Snowflake is actually using its competitors' services. Its database uses Amazon Web Services, and to a lesser extent, services from Microsoft and Google. It's never a great situation for competitors to have any sort of leverage, and that should be a concern for Snowflake investors.

Amwell, however, doesn't face those same challenges. While it's facing competition, it doesn't need to worry about facing off against behemoths like Amazon and Microsoft. There's much more potential and room for Amwell to grow, especially if the demand for telemedicine continues to rise.

Shares of rival Teladoc are up more than 120% already this year. Even if Amwell can replicate half of that success, many investors would likely be thrilled with the results. Meanwhile, Snowflake runs the risk of being caught in a sector that may be running on borrowed time, with many tech stocks overvalued today and at risk for a correction.

For all of these reasons, Amwell is the better new issue to buy today.