This well-known retirement account can have some serious drawbacks for certain people.

Outside of workplace retirement accounts, a Roth IRA is one of the most popular places to stash your retirement savings. Its benefits are many: Most people can open one with any bank or brokerage they want, you get tax-free withdrawals in retirement, and the government won't force you to take money out before you're ready. Plus, depending on what you invest in, it could be a lot more affordable than using your company's 401(k).

But hold on a second. While a Roth IRA can be a great retirement savings account for a lot of people, it's not the best fit for everyone. You shouldn't contribute to one if any of the following applies to you. 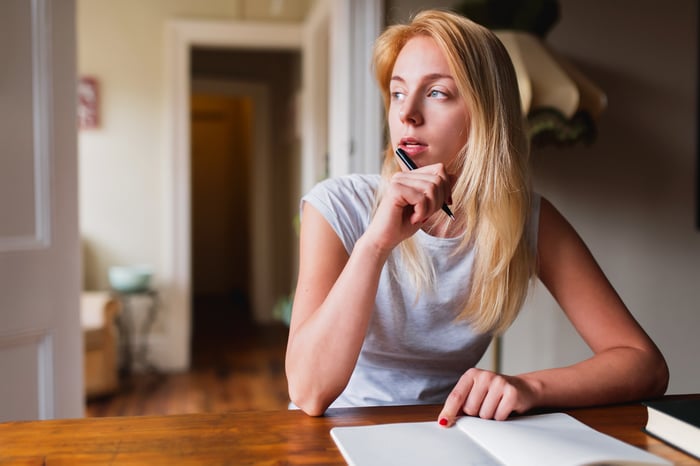 1. You're in a higher tax bracket now than you think you'll be in retirement

Roth IRAs are best for those who think they're earning about the same or less than they'll spend per year in retirement. That's because you pay taxes on your Roth IRA contributions the year you make them. So if you aren't earning very much, you'll be in a lower tax bracket and you'll give less of your hard-earned cash back to the government.

But when you're earning a lot of money, a Roth IRA could actually hurt you. You will likely be in a higher tax bracket and you'll pay more money to the government this year than you would have needed to if you'd used a tax-deferred account, like a traditional IRA. Contributions to these accounts reduce your taxable income for the year and may bring you down into a lower tax bracket. You will pay taxes on your distributions in retirement, but if your income is lower by then, you'll owe a smaller percentage to the government.

2. Your employer offers a retirement plan with a company match

A Roth IRA isn't necessarily a bad idea if you're eligible for an employer match through your company's workplace retirement plan, but it's not a great first choice. Your company match is essentially a bonus, except you only get it if you put money into your workplace retirement account. There's no good reason not to take it unless you can't afford to do so.

Once you've gotten your full company match, you can then put additional money into a Roth IRA if that makes more sense for you financially. Or if your company offers a Roth 401(k), you may prefer to contribute to this account instead of a Roth IRA. It's taxed the same way as a Roth IRA, except company matches are still considered tax-deferred, and you get the larger contribution limits of a 401(k). You may contribute up to $19,500 to a 401(k) in 2020 or $26,000 if you're 50 or older, compared to just $6,000 and $7,000, respectively, for a Roth IRA.

Roth IRAs have income limits that prohibit high earners from contributing money directly to the account. It depends on your modified adjusted gross income (MAGI), which is your adjusted gross income (AGI) with certain tax deductions added back in. Married couples filing jointly must have MAGIs under $196,000 if they'd like to contribute up to the Roth IRA's annual contribution limit. Single adults must have an MAGI under $124,000.

You can still put money away in a Roth IRA with a high income, but you have to take a more indirect route. It's called a backdoor Roth IRA. Basically, you put money into a traditional IRA and then do a Roth IRA conversion in the same year. It adds some extra hoops, but it gets you to the same place in the end.

If you earn too much to contribute directly to a Roth IRA, a tax-deferred account may work better for you anyway because of the tax savings this year, as discussed above. So weigh this before deciding to open a backdoor Roth IRA.

If none of the three scenarios apply to you, a Roth IRA could be a smart place to put some of your extra cash. You can open one online through a brokerage or bank, and as soon as you've transferred your funds, you can begin investing that money to help you save for a more comfortable retirement.