Both Biden and Trump talked up electric cars and renewable energy in last night's debate.

Well, the first presidential debate of 2020 is in the history books now (and thank goodness for that). Today, in the aftermath, stocks are beginning to react to what little new we learned from the two major candidates last night.

Illustrative of just how confusing the debate was, however, this morning investors in would-be lithium miner Piedmont Lithium (PLL) first sold off that stock en masse (down as much as 12.5%), then reversed course, erased all those losses, and bid Piedmont back up 7.2% through 10:40 a.m. EDT. A second lithium company working to begin production, Lithium Americas (LAC -2.56%), has enjoyed a more sustained upturn today, rising 12%. 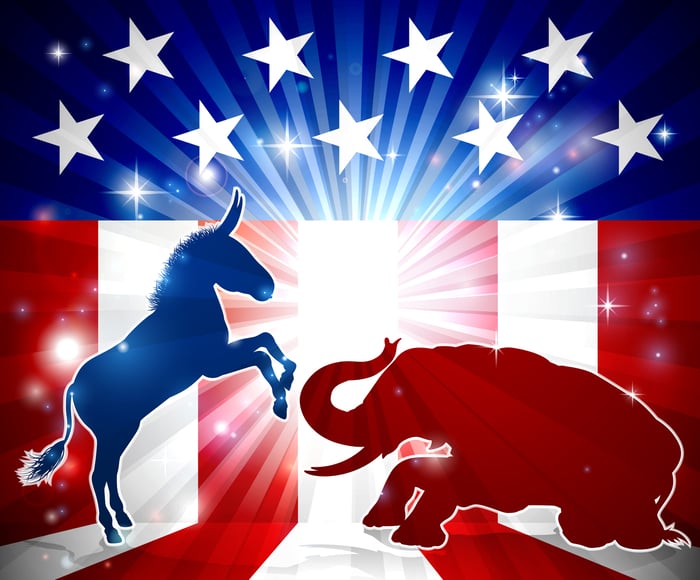 Why are these stocks all rising today? Let's tackle them one at a time, beginning with the easiest to answer: SunPower.

Notwithstanding whatever the candidates would say last night, SunPower stock was more or less fated to rise today as investors responded to news that investment bank J.P. Morgan has raised its target price on the stock from $11 to $13 per share. (Not coincidentally, SunPower's new stock price is just about $13 on the nose). According to a digest of the analyst's report posted on TheFly.com, "customer demand trends [for rooftop solar] continue to improve from the COVID-19 downturn in March." With lending costs under control, the analyst sees greater profits ahead for solar companies in general, and for SunPower in particular.

Turning now to the lithium sector, which produces a crucial element for the manufacture of rechargeable batteries to store the electricity generated from solar power, Piedmont's topsy-turvy morning can probably be broken into two halves. First, the stock declined as investors moved to lock in the windfall profits they earned when Piedmont announced its huge lithium supply contract with Tesla two days ago. Then the stock turned back up, and Lithium Americas shares continued their rise, as new investors began placing bets based on what they saw at the debate last night.

And what did they take away from that debate? I think they learned that both candidates are open to at least some growth in renewable energy -- maybe not a full-blown "Green New Deal," but at least something with a greenish tinge. This would explain the rising share prices of both lithium stocks -- and to a lesser extent, of SunPower's rise as well.

Granted, during the debate, neither candidate mentioned "solar energy" even once. But former Vice President Biden did at least allude to it with his assertion that "no one's going to build another oil fire plant in America. They're going to move to renewable energy." Biden also promised "to take the federal fleet and turn it into a fleet that's run on their electric vehicles" -- an initiative that would clearly require the production of more electric car batteries, and therefore more lithium to manufacture them. For that matter, even President Trump expressed muted enthusiasm for renewable, insisting, "I'm OK with electric cars, too."

So, on balance, I'd have to agree with the investors buying up lithium and solar stocks today. Based solely on the promises the candidates made last night, it's the logical reaction.