New mobile network capabilities are live, and the advertising frenzy has begun. Here's how to profit.

This has been a tough year for consumer electronics, with smartphone sales expected to be down nearly 10% from 2019, according to researcher IDC. However, 5G mobile networks are live, and a bevy of 5G-enabled phones are here. A big rebound may thus be in order in 2021, and 5G advertising is ramping up from America's mobile network operators as they try to capitalize on the coming upgrade cycle.

Even so, many tech stocks have tapped the brakes in September, creating a buying opportunity. Three poised to benefit in the year and decade ahead (since 5G is still in the very early stages of development) are T-Mobile (TMUS -0.35%), Marvell Technology Group (MRVL 0.09%), and Xilinx (XLNX). Let's find out a bit more about these three 5G stocks. T-Mobile has long been the scrappy underdog battling AT&T (T -1.22%) and Verizon (VZ -1.73%). With its takeover of Sprint, though, the game has changed. T-Mobile moved past AT&T as the nation's second-largest mobile network operator, and it is bearing down on Verizon as it consistently adds over a million net new subscribers every quarter. While it's still banking on lower subscription costs and no contracts to woo customers, this is no longer an underdog.

One of the key reasons T-Mobile wanted Sprint was for the nascent 5G race. Combining its spectrum with that of Sprint's, T-Mobile went live with its new network earlier in 2020 and boasts by far the most nationwide coverage. Granted, on the technology front, the "un-carrier" still lags behind Verizon, as Big Red's 4G LTE on average performs better than both T-Mobile and AT&T 5G. But it's still early in the game, and T-Mobile will continue to make improvements to its new mobile service.

To wit, even after acquiring Sprint, T-Mobile has $72.5 billion in debt -- far less than the $169 billion and $113 billion at AT&T and Verizon, respectively. That leaves plenty of headroom for T-Mobile to continue spending on technology and further narrow the technological gap. Plus, while the mobile phone industry has matured and is no longer in all-out growth mode, this operator has bucked the trend and keeps adding connections -- it racked up 1.25 million net new connections during Q2 2020 alone. As it has begun to trumpet its new 5G, the recent pace of additions could continue.

Of course, this stock comes at a premium price given its continued growth relative to its peers. Shares trade for over 37 times trailing 12-month earnings. However, T-Mobile expects to log some $6 billion in annual savings as it integrates Sprint, more than doubling the current bottom line. If that happens, this mobile network provider is a value as the 5G era dawns.

2. Marvell Technology: Moving and processing data in the 5G age

While 5G is coming into public consciousness thanks to advertising campaigns at Verizon, T-Mobile, and AT&T, one of the best ways to profit off of the movement isn't from the networks themselves. Behind the scenes, a great deal of network hardware upgrades are taking place, and many suppliers are logging strong growth as a result. Semiconductor designers specifically look especially promising.

Enter Marvell Technology, responsible for network infrastructure processor chips (picked up from the acquisition of Cavium a couple years ago) and related hardware for mobile providers, data center operators, and the auto industry. The company's 5G portfolio (as well as cloud computing products) have it in expansion mode through the first half of the year, with revenue up 8% from the same period a year ago to $1.42 billion. Better still is the 75% jump in free cash flow (revenue less cash operating and capital expenditures) to $342 million during the first six months of the year, good for a healthy free cash flow profit margin of 24%.

Free cash flow is an important metric for chip companies, as it enables them to continuously improve their processes and technology. In this area Marvell is doing well. It is working with the world's largest chip fabricator, Taiwan Semiconductor (TSM -1.04%), to build semiconductors on new 5-nanometer architecture (chips with the highest-density computing power around). And as it has continued to invest in better chip designs, free cash flow generation has helped it progressively improve its balance sheet as well since the Cavium purchase. 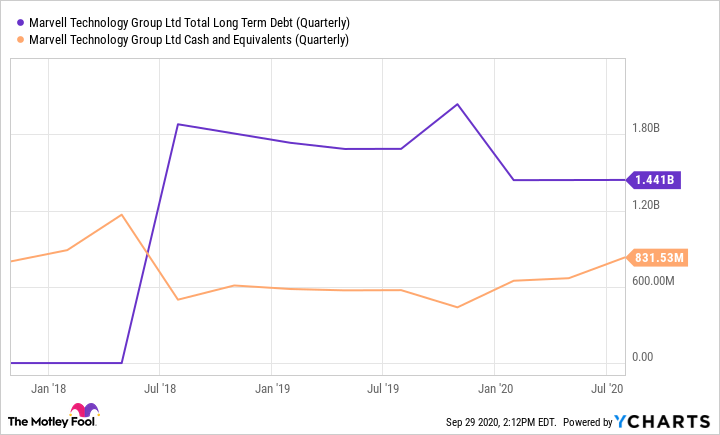 Why Marvell stock now? Growth is expected to continue through the second half of the year, with a 13% expected increase in Q3 as global 5G deployment continues. This growth includes ongoing restrictions in sales to certain Chinese customers as the U.S.-China trade dispute continues. And free cash flow is on the rise again after Marvell recently took over Avera Semiconductor at the end of 2019 for $600 million. The stock currently trades for 19 times trailing 12-month earnings (64 times free cash flow reflecting the Avera purchase), a value for this network hardware tech leader.

Field programmable gate array (FPGA) chip leader Xilinx is in an entirely different boat than Marvell. It was a high-flying growth story a couple of years ago, but the U.S.'s trade feud with China has hit the company especially hard as it lost a key customer in Chinese tech giant Huawei. Shares remain down well over 20% from all-time highs set in early 2019.

Revenue during the company's Q4 2020 fiscal year (the three months ended March 28, 2020) fell 9% year-over-year, and Q1 fiscal 2021 (the three months ended June 27, 2020) fell another 14%. However, the company may be turning a corner, with year-over-year sales declines of 9% (at the midpoint of guidance) expected in Q2. Some easing in sales restrictions to Huawei is helping, as is strength in the 5G market.

FPGAs are a flexible type of chip that can be programmed in the field by engineers for a wide variety of tasks -- from 5G and network infrastructure to cloud computing and AI. Besides ongoing struggles related to politics and economics, some of the company's end markets in the auto and consumer electronics industries have also been put in the penalty box this year due to the pandemic. But as the effects of COVID-19 slowly ease and demand from these end markets comes back, Xilinx is in a prime position to rebound.

It's been a tough stretch for this 5G stock, but along the way, the FPGA designer has remained highly profitable. Free cash flow over the last 12 months was $1.02 billion on total sales of $3.04 billion -- an enviable free cash flow profit margin of nearly 34%. The balance sheet is also in exceptional shape, with cash and short-term investments totaling $3 billion and a debt of just $2 billion. The stock trades for 40 times earnings (26 times free cash flow), but if Xilinx can muster a sales rally in the year ahead, it wouldn't be an unreasonable price to pay. The ongoing need for 5G and other networking and cloud computing hardware works in this semiconductor firm's favor in turning back the tide.