Marvell Technology Group (NASDAQ:MRVL) recently announced it had entered a definitive agreement with Cavium (NASDAQ:CAVM) to merge operations. Share prices of both companies immediately shot higher, making for a very happy Thanksgiving week for investors. The deal also continues a positive trend in the semiconductor industry that could continue for some time. 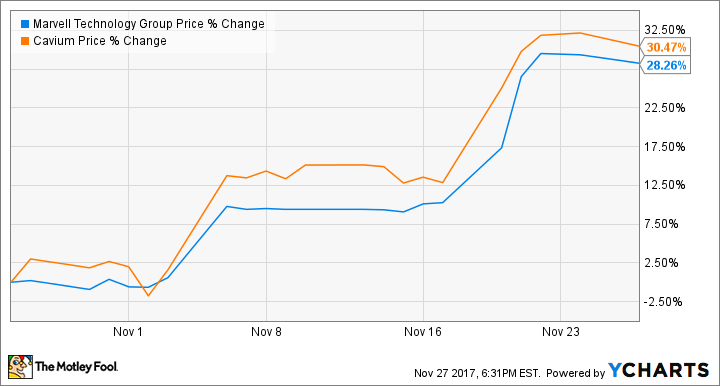 Should regulators, as well as Marvell and Cavium shareholders, approve the deal, owners of Cavium stock will receive $40 a share. Additionally, they will receive 2.1757 shares of Marvell stock for every one share of Cavium they own. The total offer values Cavium at $80 a share, or $6 billion total. After the merger, Cavium investors will own 25% of the new company.

Marvell will fund the acquisition with cash on hand and $1.75 billion in new debt financing. The new company will do $3.4 billion in revenue based on last year's figures and expand the total addressable market for its products and services to over $16 billion. The deal is expected to close by the middle of 2018. In a presentation to shareholders, Marvell and Cavium outlined the rationale behind combining. The two product portfolios are complementary. Marvell specializes in storage devices and controllers, enterprise switches, and wireless connectivity. Cavium makes multi-core and data center processors, data center switches, and storage connectivity. The combined portfolios will expand the new company's reach in the enterprise and data center universe, an area of growing importance as more computing becomes cloud-based.

The move will also combine complementary research and development efforts, and long-term revenue growth is estimated at 6% to 8% a year. The deal will also save money. Within 18 months of the merger, management says it will save $150 million to $175 million a year in operating expenses.

This isn't a surprising move on Marvell and Cavium's part. In a motley semiconductor universe characterized by lots of competition, merger and acquisition activity accelerated in 2015. Though it has cooled off this year, this most recent deal could help reignite the fire. The rationale behind the wheeling and dealing the last few years has a common theme as players have looked for complementary or overlapping product portfolios, the ability to amplify growth efforts, and cost savings. Here are a few notable examples.

Merger and acquisition activity has been great for semiconductor investors over the last few years. Owners of acquired companies have gotten paid and newly combined companies have continued to grow both revenue and profits. 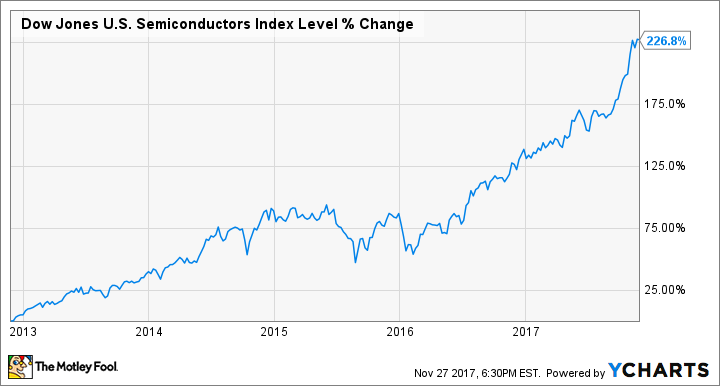 The IoT is opening up new doors of business for companies in the semiconductor industry, and former rivals are finding it makes sense to team up to capture growth, streamline operations, and ultimately increase the bottom line for shareholders. The announced deal between Marvell and Cavium is proof that that trend could persist. If it does, the good times for semiconductor business owners could continue.