Big Magenta is handing out Betty Crocker layer cake mixes, because the company has a "layer cake" approach to 5G networking. Yes, really.

Mobile network operator T-Mobile (TMUS -1.17%) is handing out cake mixes for a magenta Betty Crocker layer cake while supplies last. Why a layer cake? Because the company has a "layer cake" approach to 5G networking, baking up nationwide coverage based on three very different wireless spectrum slices.

The promotion is real, but also rather short-lived. The exclusive General Mills (GIS -0.25%) cake mixes were available at T-Mobile5GLayerCake.com "while supplies last," but T-Mobile ran out of batter mixes less than 20 minutes after the press release hit the news wires. The company will also hand out a few cake mixes to winners of contests found in T-Mobile's official Twitter feed.

The "layer cake" theme here is based on T-Mobile's nationwide access to radio spectrum licenses in three very different buckets. 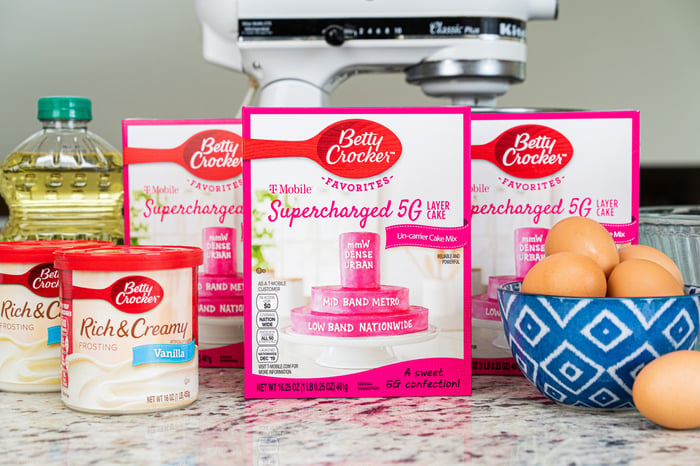 Low band signals in the 600 MHz range can carry 5G networks across long distances and penetrate lots of physical barriers such as trees, hills, and building walls, but its connection speeds tend to be relatively low.

Millimeter-wave signals carry extremely high-speed network connections but only over short distances and the signals are easily blocked by physical barriers.

Between these extremes, T-Mobile has a lot of mid-band spectrum licenses in the 2.5 GHz part of the radio spectrum, which delivers the best of both worlds with gigabit connections across fairly large geographical areas per base station.

T-Mobile also took this cookbook-themed opportunity to call out rivals AT&T (T -1.42%) and Verizon (VZ -2.91%) as "recipes for failure." Verizon's 5G network is focused on the fast but short-ranged millimeter-wave technology and both of T-Mobile's nationwide rivals are sharing spectrum space between their 4G and 5G networks. T-Mobile's 5G signals use a different set of specific spectrum slices from its 4G services.

Why These Big-Time Investors Own T-Mobile
376%