The energy sector has been the worst-performing sector of the stock market so far this year, down 49%. Given that global demand for oil and refined products has fallen and oil and gas prices have plunged, some of this decline is justified. However, there's reason to believe that some energy stocks have sold off too hard: especially those whose businesses are less susceptible to swings in commodity prices. 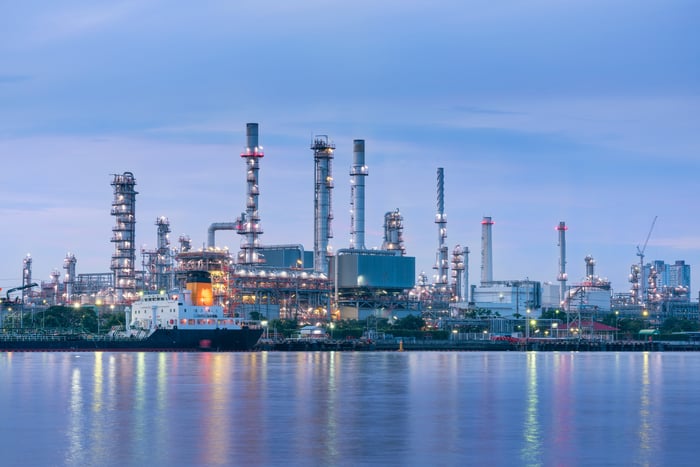 Dominion Energy is one of the largest utilities in the U.S. Its state-regulated utility operations comprise the majority of its business, mostly in the form of generating, distributing, and transmitting electricity from nuclear and natural gas.

Fairly steady earnings and dividend growth have made Dominion an attractive stock to own for income investors. However, the company's plans to shift further toward renewables will cause a bit of a shakeup in the short term. Most notably, this involves selling $9.7 billion of natural gas transmission and storage assets to Warren Buffett-led Berkshire Hathaway and decreasing the company's quarterly dividend by one-third starting in the fourth quarter of this year.

In the long term, Dominion expects it will be able to grow its dividend and earnings per share 6% and 6.5% annually, respectively. This forecast is based on growing the company's renewable energy generation capacity at a 15.4% compound annual growth rate over the next 15 years.

Dominion currently has the third-largest solar capacity among American utilities, and was able to hit its 3 GW "target for renewable generation in service or under-development in the State of Virginia, a year and a half ahead of schedule."

Even with the dividend cut, Dominion would yield around 3% at today's prices. Investors who are willing to sacrifice a little income in the short term for potentially higher gains over the long term are likely to agree with the company's decision. As for its financial health, Dominion's leverage -- as represented by financial debt to equity and debt to capital -- is now near five-year lows, a good sign that its balance sheet is improving. 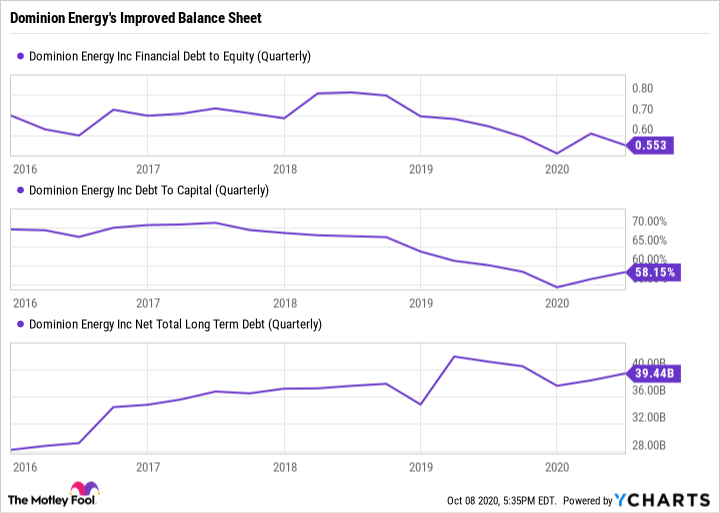 Kinder Morgan is one of the largest natural gas pipeline and terminal infrastructure companies in the United States. The stock, which is down 40% this year, now yields 8.2%.

Like Dominion, Kinder Morgan is in a better financial position now than it was five years ago. 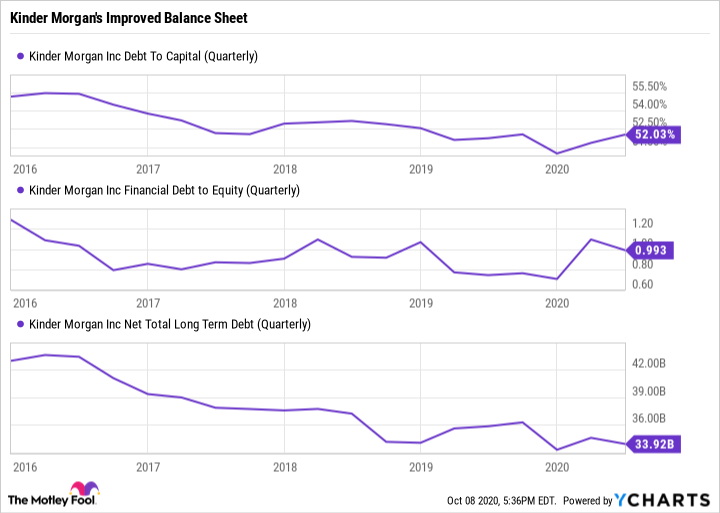 The company's predictable take-or-pay and fee-based cash flow provides the backbone for consistent results despite short-term market challenges. However, a gradual shift away from natural gas and toward renewables could impact demand for Kinder Morgan's services, leading to potentially less favorable contracts in the future.

In its second quarter conference call, Kinder Morgan updated its full-year 2020 guidance, estimating a mere 9% decrease in earnings before interest, taxes, depreciation, and amortization (EBITDA). Considering the earnings collapse that many other energy stocks are facing, a slightly less profitable year for Kinder Morgan is a pretty good result.

In terms of sustaining the dividend, the company estimates its distributable cash flow will be below budget by 11% this year, down to about $1.99 per share. Even at this reduced level, Kinder Morgan would be generating plenty of cash to fund its annualized dividend of $1.05 per share.

Lower oil prices tend to reduce input costs for large refiners like Phillips 66. But an economic slowdown has resulted in lower demand for refined products. As a result, Phillips 66 has been running its refineries less, leading to a weak performance so far in 2020.

The good news is that refinery utilization rates are improving as demand picks up and Phillips 66 gradually reduces its product inventories, which had been rising as supply outpaced demand. Phillips 66 has seen significant improvements outside of the U.S., citing nearly fully recovered demand for gasoline and distillates in Germany and Austria.

Unlike the drilling and production side of oil and gas, a downstream leader like Phillips 66 doesn't need oil prices to rise: It simply needs the demand for its products to pick up. Management cited jet fuel as the hardest-hit product, with demand down about 50% from pre-pandemic levels.

Phillips 66 is arguably the riskiest energy stock on this list, but investors can buy the stock for over half off its price at the beginning of the year. Even with rising debt, Phillips 66 retains a strong balance sheet capable of handling a prolonged slowdown. For now, the company has suspended dividend increases, but the sell-off has boosted the yield to 6.8% at the time of this writing.

A safer way to approach a volatile sector

The energy sector is full of risky investments, particularly in the upstream side of oil and gas. Industry leaders like Dominion Energy, Kinder Morgan, and Phillips 66 offer a different way to approach this volatile sector. Dominion's state-regulated assets, success with renewables, and projected earnings growth are good signs that the utility is well-positioned for the next 15 years. Kinder Morgan's minor decrease in earnings in what has been a challenging year for the energy sector is proof that its predictable cash flow is sustainable and can comfortably cover its dividend.

As for Phillips 66, the stock appears to have sold off too strongly given that refinery utilization rates are improving. In the meantime, investors will collect a 6.7% dividend as they wait for the stock to recover.

Why Phillips 66 Stock Is Slumping Today
405%