This fuel cell stock's ride has been electric in 2020, but will it continue to power higher?

Ballard Power Systems (BLDP -2.58%) was the best-performing fuel-cell stock of 2019, soaring 190%, and has continued to fly even higher in 2020, returning more than 162% year to date. But with nearly three months left in the year, it remains to be seen which fuel cell stock will win the title this year -- though Plug Power (PLUG -4.78%) is several furlongs ahead in the horse race.

Fueled by the company's ambitious five-year growth plan, investors have launched Plug Power's stock 483% higher so far this year, while the next best performing fuel cell stock, Bloom Energy (BE -1.82%), has risen more than 200%. But with such impressive gains behind it, many forward-looking investors are wondering if Plug Power has finally turned a corner, if the stock can maintain its upward trajectory, and if it's still a good time to pick up shares. 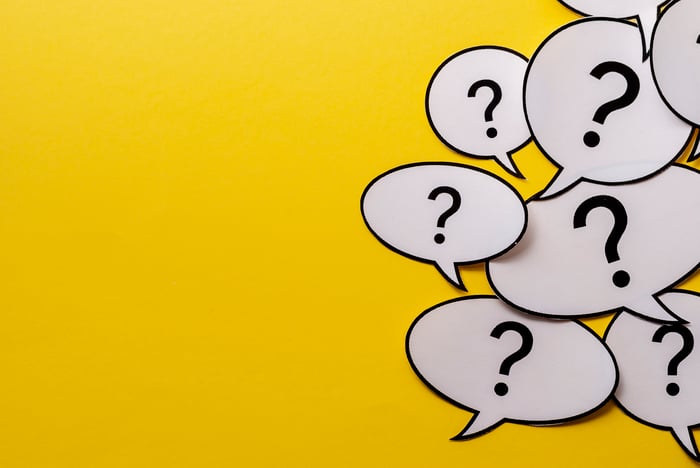 Investors who haven't checked in with the price of Plug Power's shares in a few months will be shocked to find the stock changing hands at about $18 these days. And I'd venture to bet that if someone in this boat were asked to speculate what was the basis for the stock's run, the answer would be profitability -- the company has finally generated a bottom line tinted black, a feat it hasn't accomplished in at least 20 years. Or maybe positive cash flow -- perhaps Plug has succeeded in generating more cash that it was using. However, on both accounts, these speculations would both fall short of the mark. In fact, on a trailing-12-month basis, Plug Power's negative operating cash flow is at a record level. 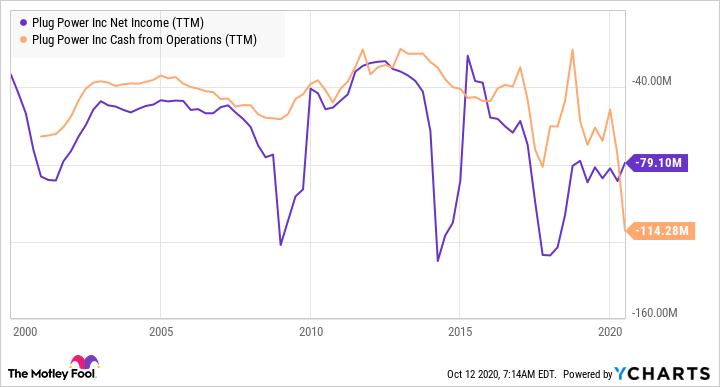 Instead, the stock's rise can be chalked up to investors' belief that the company is gaining momentum in pursuit of its lofty 2024 financial targets. Despite the challenges the company faces in 2020 due to the global pandemic, management assured investors during its second-quarter earnings presentation in August that it still expects to achieve gross billings of $300 million in 2020 and remains on track to hit its 2024 targets. Meanwhile, analysts' upgrades of the stock and news of the company's intent to enter the commercial hydrogen market are two other sources of investor excitement.

Sure, both Wall Street and Main Street seem charged up about the company's prospects, but before investors consider joining in on the fuel-cell fervor, it's critical to recognize the company's tenuous financial condition. 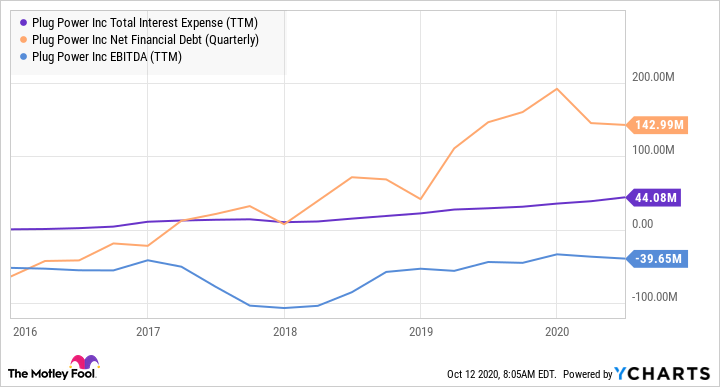 Unable to generate cash organically, Plug Power has increasingly relied on issuing debt to keep the lights on. And it will likely continue to do so for the foreseeable future. Investors who believe that the company will attain its auspicious 2024 financial goals should remember that while the company is targeting EBITDA of $250 million, it's on an adjusted basis. There's no telling how much "adjusting" will be required to hit that target. Additionally, there's no indication of what the company foresees in terms of operational cash flow. While Plug Power may succeed in generating $1.2 billion on the top line in 2024, I wouldn't be surprised if the company does manage to generate positive cash flow that it's merely enough to pay off the interest on its rising debt load.

Moreover, prospective investors must also be willing to accept the fact that they will likely suffer from future dilution. Besides raising capital through the issuance of debt, Plug Power has consistently relied on issuing equity. 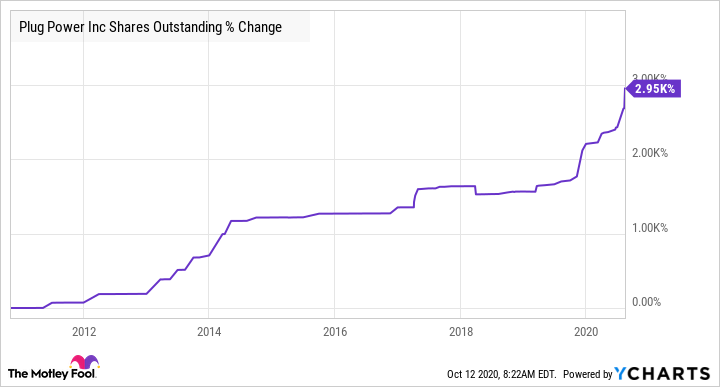 Long-term investors are painfully familiar with this fact as the company's share count has soared about 2,950% over the past 10 years.

Don't forget to consider the cost

You've accepted the prospects of future dilution and the company's potentially more debt-laden balance sheet, but you're so enthusiastic about the potential growth of the hydrogen economy that you're still interested in picking up shares? OK, but you'd be wise to check the price tag before adding Plug Power to your portfolio. Since the company is unprofitable and doesn't generate positive cash flow, we can't use traditional valuation metrics to assess the stock. Therefore, let's consider the price-to-sales ratio. Currently, the stock is trading at 19.8 times sales -- a valuation that seems exorbitant considering the stock's five-year average multiple is 3.9 and the S&P 500's multiple is 2.5.

What's a fuel-cell fan to do?

There's no doubt that Plug Power has grown its top line at an admirable clip over the past several years, but in terms of the bottom line, the situation is not quite so impressive. Perhaps profitability will emerge in the coming years, but it seems like that expectation is already baked into the stock's price. Moreover, should the company falter in progressing toward profitability, the stock will likely plummet precariously. At this point, therefore, the stock should only appeal to growth stock investors with the greatest threshold for risk.