Their strong dividends are far more protected than the market collectively seems to believe.

There are some resilient stocks, however, with yields that remain too high and valuations that remain too low to continue ignoring. AT&T (T -0.89%), KeyCorp (KEY -0.91%), and LyondellBasell Industries (LYB 0.31%) are among the best names that fall into this category right now. 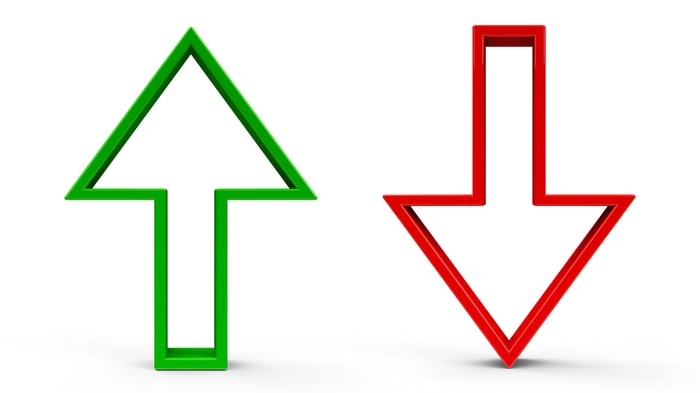 Telecom giant AT&T has a long list of problems, not the least of which is its satellite cable business DirecTV that it's reportedly struggling to sell, even at a deeply discounted price. Not far behind that nightmare is its relatively new streaming service HBO Max that shows promise, but requires a sort of promotion that AT&T has never done before.

Its long-term debt load of $153 billion isn't an easy burden to bear, either, costing the company more than $2 billion in interest payments last quarter alone.

AT&T shares hit new multi-month lows this week on this collection of concerns (and others), down more than 30% from last year's highs and back within sight of new multi-year lows.

But largely lost in the conversation these days is that AT&T is still making more than enough money to cover its dividend. Its quarterly payout of $0.52 per share is just a bit more than last quarter's adjusted earnings of $0.83 per share, and that bottom line wasn't much less than the year-ago figure of $0.89 despite the difficult circumstances this year has created.

This consistency is a reflection of the nature of all of AT&T's business lines. Although it faces wireless, landline, cable, and now streaming competition and loses customers to those competitors from time to time, that attrition is actually pretty slow-moving. Most consumers stick with their subscription-based services from one quarter to the next, and pay their monthly bill accordingly. The company's consistent dividend is ultimately the result of this consistent revenue collection.

Bank stocks have been undermined by oddly low interest rates for some time now. Things turned particularly rough around the middle of last year, however, when the fed funds rate began to fall to what would end up matching modern-era lows. It's a problem simply because the lower that interest rates are, the less money banks make on their lending activity. That's a big part of the reason bank stocks are still down by about a third of their December 2019 values: weakness that held regional bank KeyCorp down, too.

Investors may be overestimating how tough the lending environment really is right now, however, at the same time they are looking past the upsides of KeyCorp's opportunities and business mix.

What KeyBank (the primary subsidiary of KeyCorp) branches are missing in lending margins, they're offsetting in sheer volume. The company's second-quarter consumer mortgage income quadrupled year over year, and its leasing business soared nicely as well. All told, the company's noninterest income improved 11% year over year during the three-month stretch, boosted by the bank's exposure to Paycheck Protection Program funding for small businesses and the rush for mortgage refinancing while interest rates are at record lows.

It's also noteworthy that nearly half of the bank's income comes from trust and investments services and investment banking, which aren't hurt by abnormally low interest rates.

In other words, investors have priced KeyCorp like the sort of bank it really isn't.

It may not be a household name, but there's a good chance your household uses a product LyondellBasell Industries helped make. In fact, it likely helped make several products you use on a regular basis.

Contrary to frequent assumptions, LyondellBasell isn't dependent on oil refining as a source of revenue. Of last year's $34.7 billion in revenue, only about $7.6 billion of it came from its refinery operations. Most of the rest came from the sale of olefins, polyolefins, propylene oxide (and its derivatives), and polymers. Those are the building blocks for things like plastic bottles, industrial coatings, drinking straws, medical equipment, auto parts, and more.

It's a boring business, to be sure. But that's the point: It's also a business largely unfettered by economic headwinds.

COVID-related shutdowns did take a toll during the company's fiscal Q2 that ended in June, and still have the stock down 17% year to date. But a worldwide recovery of manufacturing around the middle of this year allowed LyondellBasell to raise its prices in June and July. This budding rebound doesn't appear to have been priced in yet.

Just as encouraging is how the second quarter's dramatically weakened per-share earnings of $0.94 were still almost enough to cover the dividend of $1.05, while renewed demand for olefins and polymers in the meantime should easily drive earnings well in excess of its payout. For all of a relatively normal 2019, for perspective, LyondellBasell Industries earned $9.58 per share, easily covering its payouts.