The company could be in a slightly stronger position than today. But does that make the stock a buy?

In its more than 20 years of operation, Plug Power (PLUG -2.85%) hasn't generated any profits, ever. Yet its stock is up around 385% since the start of the year. What gives? To get a sense of what's going on with this much-hyped company, you need to understand why it isn't profitable, and more importantly, whether it can become profitable in five years.

The biggest advantage of using hydrogen over fossil fuels is a reduction in carbon emissions. That's why these technologies routinely get governmental support to become commercially viable.

Though hydrogen fuel cells are environmentally friendly, they face a key limitation. As much as 95% of hydrogen produced in the U.S. is currently derived from (believe it!) -- natural gas. Plug Power aims to produce 50% of the hydrogen it uses from renewable sources (called green hydrogen) by 2024. The company has partnered with Brookfield Renewable (BEP -1.96%) (BEPC -3.45%) and Apex Clean Energy to help it achieve this goal. Recent acquisitions of United Hydrogen and Giner ELX are further steps toward Plug Power's green hydrogen goal.

Though the idea of 50% green hydrogen sounds great, note that this may increase Plug Power's costs. That adds another layer of uncertainty to a company that so far hasn't been able to generate profits using fossil-fuel derived hydrogen.

Even after 20 years in operation, Plug Power continues to incur losses. In the second quarter, the company's loss stood at $8.6 million. Though Plug Power's revenue grew an impressive 23% over the same quarter last year, its costs increased too. 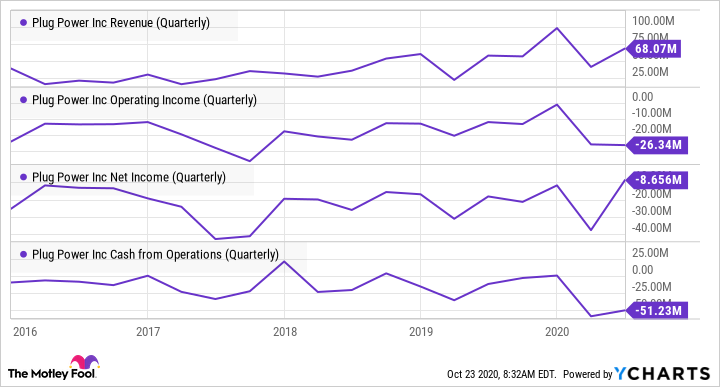 Selling and administrative costs rose a notable 60% over the year-ago quarter, likely indicating that the company had to spend more to grow its top line. Plug Power hasn't been able to make profits despite rising sales and a growing list of notable customers. That indicates that either the company's costs are high, or the customers aren't willing to pay more compared to other energy options available. Generating positive earnings remains Plug Power's biggest challenge.

Plug Power aims to raise its annual revenue from $230 million in 2019 to $1.2 billion by 2024. With a target of more than 1.5 gigawatts output from its planned gigafactory, coupled with ongoing talks with potential customers, this could well be achievable. Further, it plans to generate $200 million in operating income by 2024. The company's focus on reducing costs by as much as 50% through vertical integration and mass production may well help in achieving this too.

In the first half of 2020, the company paid nearly $25 million in interest expenses. This may rise further, resulting in nominal profits, if any, five years from now.

Hydrogen as an energy source has been around for decades. But it recently captivated everyone's attention more than ever, and a couple of factors contributed to this sudden surge in interest. One is an increased investment in Europe, where hydrogen is being increasingly pitched as a key energy source for the future. The European Commission has a strategic vision to increase hydrogen's contribution in Europe's energy mix to 13%-14% by 2050. Back home, interest in fuel cells got a further boost after Nikola's listing.

While the promise of a hydrogen economy sounds great, it faces gigantic practical challenges before it can become a reality.

In addition to fuel cells' viability as an energy source, there are several other risks in Plug Power's path to profitability. Nearly half of Plug Power's 2019 revenues came from just two customers. Not only do these two customers have significant bargaining leverage, but Plug Power also faces the risk of any one or both of them pulling back altogether. Another risk stems from much bigger and well-established companies, such as an electric or oil company, which can develop and market products cheaper than Plug Power. That may put Plug Power's existence in jeopardy.

Further, the company's dependence on debt and equity financing to grow and carry out its operations exposes it to risks. This can also potentially restrict the company's ability to spend on research and development and innovations. Finally, Plug Power also faces the risk of changes in governmental incentives to promote clean energy, which may ultimately reduce the demand for its products.

Where could Plug Power be in 5 years?

Plug Power plans to reduce its costs to generate positive operating income by 2024. It looks like an ambitious target given its high costs. Even if the company does accomplish it, high interest costs could limit net profits. Moreover, current shareholders are highly likely to face additional dilution in the process of achieving the company's sales targets. With the numerous risks that Plug Power faces, the path beyond that also looks thorny. All this makes it a stock that I would rather watch from the sidelines for now.