T-Mobile (NASDAQ:TMUS) is joining the new generation of pay-TV providers, offering an over-the-top virtual MVPD solution. TVision, a revamp of its more traditional video service that it launched in select markets last year, will be available nationwide, but exclusive to T-Mobile and Sprint customers to start.

The new TVision is focused on skinny bundles starting as low as $10 per month. The service will go up against bigger bundles like AT&T's (NYSE:T) AT&T TV and AT&T TV Now, as well as new competitors like Disney's (NYSE:DIS) Hulu Plus Live TV and DISH Network's (NASDAQ:DISH) Sling TV. 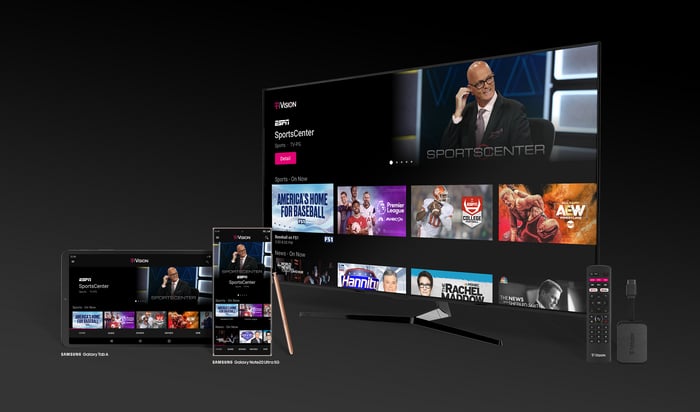 T-Mobile's new TVision product is composed of three services that all work together:

Users will be able to combine subscriptions across all three services, so if you want Vibe channels, Live channels, and a premium subscription through Channels, you won't have to switch back and forth between apps. Additionally, Live subscribers will receive 100 hours of cloud DVR, which can also be used to record Vibe networks. Standalone Vibe subscribers will need to pay extra for DVR space.

The $10 per month Vibe package is a standout option. There are few options for live TV at such a low price. Charter (NASDAQ:CHTR) has experimented with a similar over-the-top streaming service, Spectrum TV Essentials, for $14.99 per month. AT&T previously offered WatchTV for $15 per month, and offered it to select wireless subscribers for free. Philo offers a $20 per month bundle with twice as many networks and unlimited DVR.

That said, AT&T and Charter's skinniest-bundle products never gained much traction. So it's not clear how much demand there is for a super-skinny bundle like TVision Vibe.

Meanwhile, TVision Live may be less expensive than options from Hulu and AT&T, but it also comes with fewer networks. It's somewhat comparable to Sling TV, but DISH Network's service comes out ahead on price for customers interested in both sports and entertainment.

T-Mobile doesn't have the scale to compete

T-Mobile's finding out how difficult it is to offer a compelling video product without the advantage of scale. TVision is built on the back of T-Mobile's Layer3 TV acquisition, for which it paid $325 million. The company wrote down most of the acquisition's value this year.

The wireless carrier's premium video product launch from last year was underwhelming, offering the same bundle of channels and the same features as big competitors like AT&T's DirecTV for about the same price. The new TVision is able to offer lower prices than competitors, but the value might not be there. Most customers will find their needs better suited by existing options from Hulu and Sling TV.

T-Mobile's competitors have the advantage of scale. DISH Network has millions of satellite TV subscribers, and Disney owns some of the most valuable cable TV networks. Those advantages allow them to keep costs low.

The one advantage T-Mobile has is tens of millions of existing customer relationships. The ability to engage with that customer base on a regular basis could enable it to sell more TVision subscriptions than a stand-alone entertainment service. And it could operate the service at break-even profitability if it increases the lifetime value of its wireless subscribers.

T-Mobile could use TVision to keep customers from switching wireless carriers, but it's not clear that the product is compelling enough to keep customers in place. T-Mobile may not be able to offer a true bundle of services like its competitors until it's able to offer home internet service nationwide through its 5G network. The TVision launch may be a bit premature.