If you had invested $3,400 in May 2002, split between three specific tech companies, and held until today, you'd be sitting on a cool $1 million. That relatively small investment in Apple (NASDAQ:AAPL), Amazon (NASDAQ:AMZN), and Netflix (NASDAQ:NFLX) held over 18 years would have returned shareholders monster 300-fold-plus gains. There are probably not many who actually achieved those kinds of returns, but investors today can learn from what happened.

Let's take a look at the role software has played in the success of these businesses and how investors could profit from software going forward. 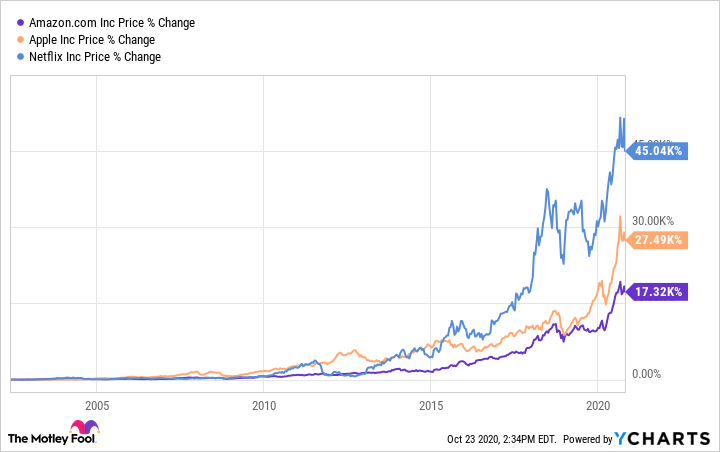 By the time Netflix released its video streaming service in 2007, Blockbuster, its brick-and-mortar video rental competitor, was already in decline. The retail chain had hit its peak in 2004 with 9,100 stores and annual revenues of $6.1 billion. That same year, Netflix had less than a tenth of the revenue of Blockbuster, but that would change.

With the incredible weight of a massive infrastructure of stores, there was no way for the video rental chain to compete. In 2010, Blockbuster filed for bankruptcy, and by 2015, Netflix had surpassed $6 billion in revenue and become larger than Blockbuster ever was.

Compared to Blockbuster at its peak, Netflix's annual revenue today is four-fold larger. It operates in eight times the number of countries, and its market capitalization is more than 50-fold higher. Software helped digitize a physical product and drove tremendous returns for investors.

And this didn't just happen with movies. A similar story could be told with music and books as Apple's iTunes service, released in 2003, and Amazon's Kindle, which hit the market in 2007, brought a new way to bring music and books to customers.  But these three monster stocks didn't just benefit from this software-powered physical-to-digital transition. They have embraced the use of software throughout their businesses.

Apple was founded as a computer manufacturer, but software has always been the magic that made its products exciting. From the 1984 "Hello, I'm Macintosh" introduction of the Macintosh computer to the 2007 unveiling of the first iPhone, the blending of software and hardware has been a hallmark of its products. With over 1.5 billion Apple devices in use today, software developers can reach a massive audience by just having their applications on the Apple App Store. The incredible scalability of software has enabled Apple to become one of the most valuable companies in the world.

Amazon has depended on software technology to make its platform easy for customers. Its one-click "buy now" button, "customers also bought" recommendations, and product ratings make buying goods on its website fast and easy. But it's not just its e-commerce segment that is built on software. In the early days of the company, its software engineers needed a way to test new e-commerce functions at scale. So the team created an internal web services platform that did just that. Software engineers could "order" the necessary cloud computing resources and utilize them as needed. This has since become a service for external customers called Amazon Web Services, a massive business with a $40 billion annual sales run rate. Software has been a key part of this e-commerce business's moat, and the $36 billion it spent last year on technology and content will ensure it stays that way.

Netflix's website was originally a simple movie wish list builder that enabled customers to create an account and add movies to their queue for delivery. But that was just the beginning. Software powers its recommendation engine and the DVD fulfillment and returns process, and now enables you to watch movies instantly without leaving your couch. 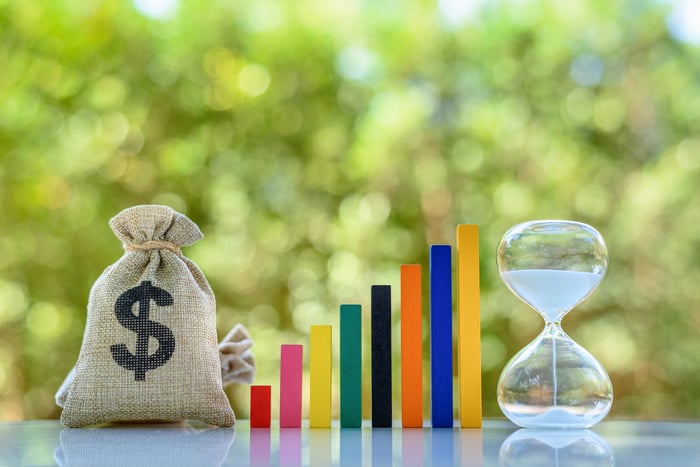 Multiple ways to invest in software

Software has been a powerful enabler for these monster stocks, but investing in this trio today won't likely give you the same amazing gains as they have had over the past two decades. One reason is that these businesses have become some of the largest companies in the world by market cap, which makes it difficult to grow into meaningful multibaggers from here. That doesn't mean these three can't be market-beating investments, but investors may want other ways to profit from the power of software.

Cloud software companies are helping to transform business processes. For example, Veeva is digitizing the product development and sales processes of the $2 trillion life sciences industry; DocuSign is eliminating the pen and paper from agreements. Software-as-a-service companies like Atlassian provide a suite of tools to unlock the productivity of teams, and with Zoom's video technology, it's striving to make video meetings better than in-person ones.

Another angle is to take Peter Lynch's investing approach and look for companies that utilize software in the places you shop or the products you buy. Check out Home Depot, for instance, which is investing in its mobile app, e-commerce capabilities, and artificial intelligence to ensure it has the right products stocked in the right place. Or consider Etsy, which is striving to enable world-class search to help its customers find that special handcrafted item.

These ideas are but a sampling of the many companies using software to change the status quo, and that could be a starting point for adding software flair to your portfolio.

Software is becoming a bigger part of our everyday lives and it's a great place for investors to find market-beating stock ideas, but patience is required. It took Netflix 10 years to release its movie streaming service and another eight years to surpass the peak revenue of the brick-and-mortar alternative. The pace of technology may have accelerated since then, but investors still have time to get in on this exciting trend. If you don't have exposure to the power of software in your portfolio, maybe it's time you changed that.