Many investors appear to be thinking through the consequences of the upcoming election, given the extreme volatility we saw in the markets last week. But let's try to focus on the positives. After all, there are a handful of companies out there that are sure to benefit from this heated election season, no matter which candidate wins.

Who are these surefire winners? Political advertisers.

Political ads are forecast to reach a whopping $14 billion this election season, up strongly from the record $9.8 billion spent in 2016. That reflects not only the huge spending in the presidential race but also eight of the 10 most expensive Senate races in history, among other statewide races and ballot initiatives. While some industries and companies would do better than others depending on who wins on Tuesday, the following advertisers are currently raking in the dough, no matter which party comes out the victor. 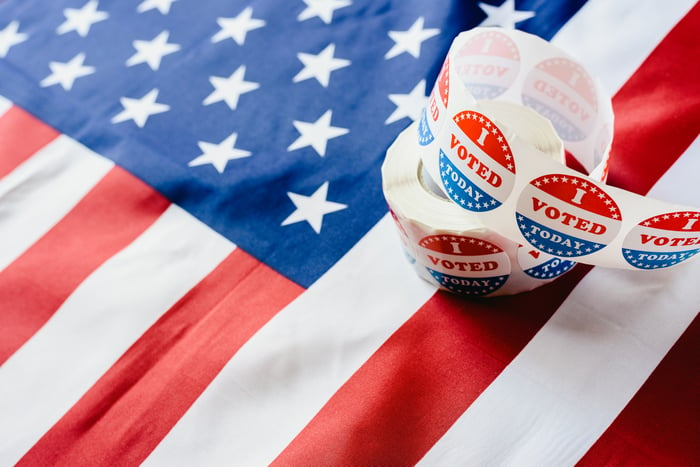 Win or lose, political advertising is a boon to these media companies. Image source: Getty Images.

Recently, Bloomberg reported that YouTube is facing an enviable problem this election season: It doesn't have enough space to satisfy the overwhelming demand for ads. According to a person familiar with the matter, YouTube has been unable to place as much as 75% of the requests for ads in certain areas, causing political ad prices in key swing states to double.

That certainly bodes well for YouTube parent Alphabet, which just reported strong earnings on Thursday. Although political ads most certainly helped last quarter, leading to a 32.4% jump in YouTube ad revenue, it should affect Alphabet's Q4 as well, given the intensity of last-minute advertising in October.

In addition, social media stocks Facebook (NASDAQ:FB) and Snap (NYSE:SNAP) have also seen strong results this earnings season. While some social media companies, including Twitter, have shunned political ads, the political tailwind appears to have boosted both Snap and Facebook, with usage skyrocketing amid COVID-19 lockdowns, and campaigns hungering for hyper-targeted ad capabilities.

TV of all kinds

Although digital advertising may be gaining market share on traditional television overall, the majority of political ad spending today still occurs on television, especially local broadcast. In fact, a whopping 60% of election ad spending is geared toward local broadcast, given the hyperlocal nature of the format.

That spending will help not only the broadcast networks CBS, NBC, and ABC -- owned by ViacomCBS, Comcast (NASDAQ:CMCSA), and Disney, respecitvely -- but also large cable delivery companies such as the aforementioned Comcast and Charter Communications (NASDAQ:CHTR), which make money from local affiliate ads. In its recently reported third quarter, Comcast reported an 11.8% rise in ad revenue for its cable business (ex-NBC), which was entirely attributed to political advertising, as non-political advertising was down 6.8% from the prior year. For its part, Charter's advertising revenue spiked 16.8% last quarter.

And as more and more people cut the cord and turn to streaming advertising solutions, increased political spend should also benefit over-the-top streaming darlings such as Roku (NASDAQ:ROKU) and The Trade Desk (NASDAQ:TTD) which have enjoyed massive runs this year.

Finally, a decent portion of political ads still go to radio, and that should benefit Sirius XM (NASDAQ:SIRI). Sirius recently reported Q3 results that beat expectations while also raising guidance, which sent the stock up after its Oct. 22 earnings release. The beat was partly fueled by a stunning 46% sequential growth in advertising spend, helped in no small part by political ads.

But a word of caution

It should be known that while an intense political season is under way, it could amount to just a one-time boost for these companies if the overall economy doesn't recover after Nov. 3. Ad dollars come from businesses, which need a healthy economy to afford any advertising at all.

Of course, both of those figures were sequential improvements from the second quarter, so things are still moving in the right direction for these media giants. Yet with no stimulus bill in sight, and COVID cases starting to rise again, it's unclear whether the economy will continue bouncing back as strongly as it did in the September quarter. Hopefully that's the case, but it's something to keep in mind for all of these ad-based businesses heading into 2021.