It has been many years since PC gamers have had any real choice when it came to high-end graphics cards. Once you went above a few hundred dollars, graphics chip leader NVIDIA (NASDAQ:NVDA) reigned supreme. Rival Advanced Micro Devices (NASDAQ:AMD) has been successfully competing at lower price points, but the lucrative high end of the market has eluded the company.

AMD has tried and failed multiple times over the past few years to compete with NVIDIA at the high end. There was the Fury X back in 2015, which failed to disrupt the status quo. A pair of RX Vega graphics cards in 2017 targeted the $400 to $500 price range, but they were playing catch up with NVIDIA cards that had been on the market for more than a year at that point. Then there was the Radeon VII in 2019, which fell short of effectively competing against NVIDIA's RTX 2080.

AMD may finally have cracked the code with its RX 6000 series of graphics cards announced last week. Built on its RDNA 2 architecture, the same architecture that powers the graphics chips in the upcoming generation of game consoles, AMD has apparently made huge strides in both performance and efficiency. If the company's benchmarks are to be believed, NVIDIA will now have to fight to maintain its high-end market share. 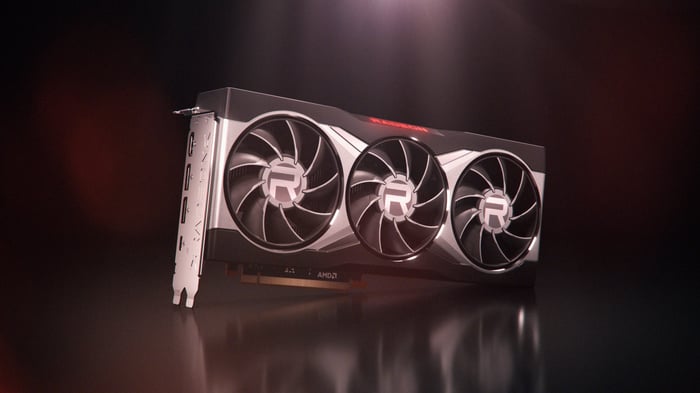 AMD announced three new graphics cards last week: The RX 6800 is the lowest end offering priced at $579; the RX 6800 XT offers a bit more performance for $649; and the RX 6900 XT is the monster of the group, priced at $999. This announcement comes soon after NVIDIA launched its GeForce RTX 3000 series cards, which are selling out across many online retailers.

While third-party reviews of AMD's new graphics cards will provide a detailed look at how they perform, AMD has posted a series of performance benchmarks that should have NVIDIA worried. While AMD's new cards don't beat comparable NVIDIA products across all games, they come out ahead more often than not.

Here's how the pricing of these cards compare:

AMD's benchmarks for Borderlands 3 running at a 4K resolution at the highest graphics settings spells trouble for NVIDIA. Both the RX 6900 XT and the RX 6800 XT beat NVIDIA's much pricier RTX 3090, and the RX 6800 beats the RTX 2080 Ti by a wide margin.

Given these benchmarks are coming straight from AMD, they should be taken with a grain of salt. But if they're close to accurate, AMD will storm the high end of the graphics card market in November when the RX 3000 series begins to launch.

In the same way that AMD's Ryzen processors have more than caught up to Intel in the CPU market, it now appears that NVIDIA's advantage has disappeared in the graphics card market. A more competitive market is good for gamers and good for AMD, which has suffered through years of being a distant no. 2. It's not so good for NVIDIA, which now has to contend with legitimate alternatives to its most expensive graphics cards.