Shares of Ford Motor (NYSE:F) gained 16.1% in October, according to data provided by S&P Global Market Intelligence, thanks in large part to the company's better-than-expected third-quarter results. The stock got a jump-start early in the month after a Wall Street analyst predicted strong earnings, and another boost toward the end when the company delivered.

Ford and other automakers have had a complicated year, with the stock off about 50% year to date early in the pandemic before recovering to "only" be down 17% at the end of October. COVID-19 has had a real impact not only on auto sales but on production as well, and the disruption has weighed heavily on the stock. 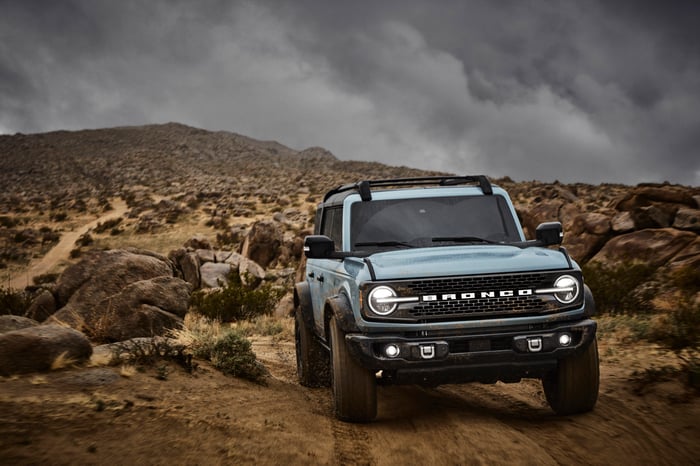 But Ford got a boost on Oct. 12 after Benchmark analyst Michael Ward upgraded the stock to a buy and predicted third-quarter earnings would come in better than expected. Ward argued that Ford had minimal COVID-19-related disruptions in the quarter, and the metrics in the auto credit markets were improving.

Looking past the quarter, the analyst is also bullish on Ford's new CEO, Jim Farley, and the company's flurry of new products.

Ford justified that belief on Oct. 28 by reporting adjusted third-quarter earnings well above what Wall Street, and Ward, had expected, and saying it now expects to earn a full-year profit. The company was helped by strong sales of pickups and SUVs, and a partial recovery in China.

Ford's been a tough company to love of late, burning through a series of CEOs as it tries to refocus itself for the future. But increasingly Ford looks ready for that future. The company, as Ward noted, has a number of new products, including an electric Mustang, a compact sports SUV with the Bronco name, and a new F-150 pickup, that should be big sellers in 2021.

It's been a long time coming, but Ford appears set up well to continue its recovery in the quarters to come.