At the start of 2020, my stock portfolio looked quite a bit different than it does today. I owned mostly "safe" stocks, largely ignoring the fast-growing tech companies that dominate the headlines. At the time, my top stock investments were tech-giant Apple (NASDAQ:AAPL) and a few real estate investment trusts, or REITs, with rock-solid cash flow and steady growth.

Then, the COVID-19 pandemic and the resulting market panic happened, and I found myself staring at a once-in-a-generation buying opportunity. I ended up putting more money into new stock positions in the second and third quarters of 2020 than in any six-month period before. One stock, in particular, that I thought was an interesting bargain was Pinterest (NYSE:PINS), the social media company that did things a bit differently than its larger siblings and had been largely neglected by investors since its 2019 IPO.

To be clear, I hadn't planned on Pinterest becoming my largest stock investment. When the market was crashing, I invested enough to make it what I consider a "full" position -- but then something happened. Pinterest started to deliver incredibly impressive numbers, and the stock has more than tripled in just over seven months since then. Now I own more Pinterest stock than any other company and have no plans to sell a single share. Here's why. 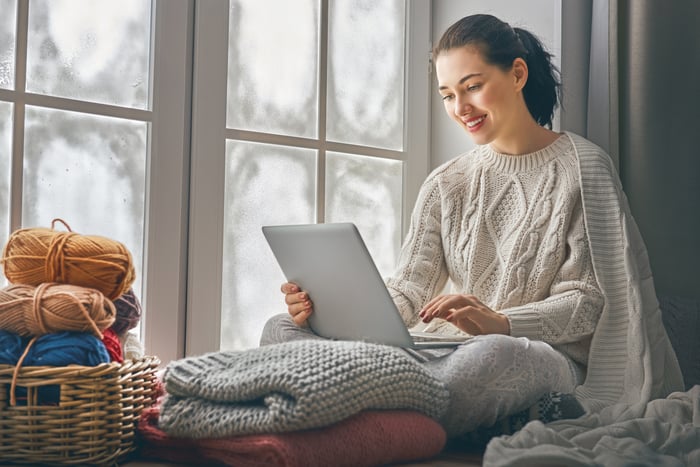 To say that Pinterest has been resilient during the pandemic would be a massive understatement. As people were forced to stay at home and unable to browse for ideas in stores and other in-person settings, Pinterest's user base soared. As of June 30, Pinterest had added more than 116 million active users over the prior year, and we recently learned that the platform added yet another 26 million in the third quarter.

Speaking of the third quarter, Pinterest absolutely crushed expectations. The company posted 58% year-over-year revenue growth and adjusted earnings per share (EPS) of $0.13 per share, while analysts had been expecting the company to barely break even. Global-advertising spending rebounded nicely after a second-quarter slump.

Pinterest could still be in the early stages of growth

Despite the impressive performance, Pinterest could still have plenty of room to grow and monetize its platform. For one thing, while Pinterest's 442 million monthly active users (MAUs) sounds like a ton of people (and it is), it's less than one-sixth of Facebook's (NASDAQ:FB) user base. And since Pinterest's international growth has been its strongest, it could conceivably double or triple its user base over the next few years.

What's more, Pinterest is still in the relatively early stages of monetizing its platform. The company's average revenue per user (ARPU) currently stands at $1.03, and there are a couple of things to know about this number. First, the average U.S. Pinterest user generates $3.85, while the average international user only produces $0.21.

Speaking of consumers, perhaps the most exciting part of Pinterest's business from a long-term perspective isn't with the core advertising business, which accounts for virtually all of the company's revenue today, but with e-commerce. People generally use Pinterest to get ideas for things that they'll eventually buy (or make and buy the materials), which makes it a natural fit to incorporate some sort of retail elements into the platform. Pinterest has already partnered with e-commerce facilitator Shopify (NYSE:SHOP) to allow merchants to display their products, and this could be just the beginning.

In a nutshell, Pinterest has been one of the biggest winners of a difficult 2020, but I'm more excited than ever to watch the company turn its rapidly growing user base into profits. I have quite a bit of my own money invested in Pinterest's success, and even though my investment has already been a profitable one, I have no intention of selling a single share.