Shares of General Motors (NYSE:GM) were trading higher on Tuesday amid optimism about a COVID-19 vaccine and the improved prospects for electric vehicles after President-elect Joseph R. Biden takes office next year.

Many U.S. stocks were moving higher on Tuesday as investors rotated out of technology bets and into companies that stand to benefit from an economic recovery.

That was part of what was pushing GM's shares higher, but it likely wasn't the full story. As auto investors know, GM has made a big, high-profile bet on electric vehicles -- and there's a good chance that the incoming Biden administration will implement policies intended to boost sales of EVs in the United States. 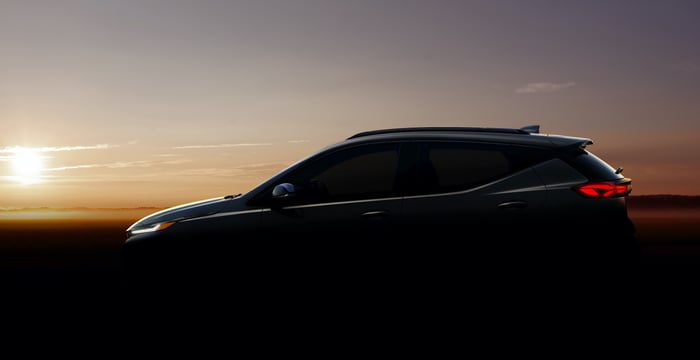 GM said on Monday that an updated version of its Chevrolet Bolt EV is coming soon, along with a Bolt-based crossover SUV called the Bolt EUV. Image source: General Motors.

As if in preparation for such a boost, GM announced yesterday that it will hire 3,000 new technology employees to bolster its electric-vehicle development teams and software-as-a-service efforts.

Why were GM's shares moving up on Tuesday? All of the above, most likely.

Next up for GM is the arrival, as of Dec. 1, of its new chief financial officer. Paul Jacobson will join GM from Delta Airlines, where he had served as CFO since 2012. The highly regarded Jacobson will replace the similarly highly regarded Dhivya Suryadevara, who departed GM earlier this year for an opportunity at a start-up company.