Ford Motor Company (NYSE:F) revealed a new electric commercial van on Thursday, a key part of the Blue Oval's bid to maintain its dominant market position in commercial vehicles in the U.S. and Europe as the world transitions to zero-emissions vehicles.

The Ford E-Transit, which will go into production in about a year, is a battery-electric take on the company's huge-selling Transit commercial van. Like the existing Transit, the new E-Transit will be offered in eight different configurations, including a chassis-cab model that can be tailored to a commercial customer's specifications by aftermarket "upfitter" companies. 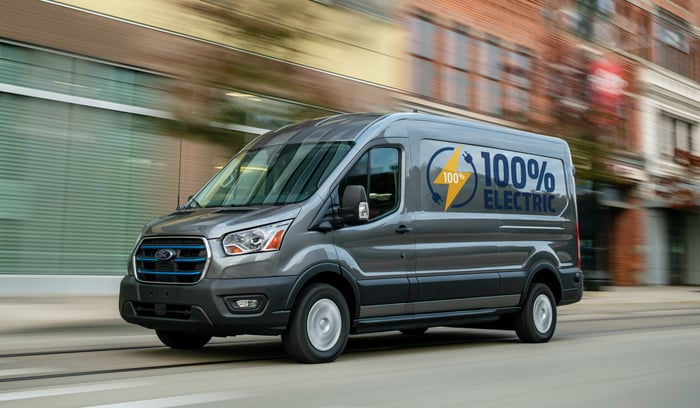 The E-Transit is a straightforward single-motor, rear-wheel-drive design with an estimated 126 miles of range. That may sound low, but Ford said that its extensive data shows that most vans operated by commercial-fleet customers travel fewer than 100 miles per day. Fleet buyers won't be willing to pay extra for range they won't use, executives said.

When it arrives late next year, the E-Transit will face competition from start-ups including Ohio-based Workhorse Group (NASDAQ:WKHS), which has worked with United Parcel Service (NYSE:UPS) to develop an electric delivery van.

But Ford said that its position atop the commercial-vehicle market, along with the E-Transit's advanced logistics and tracking software, will make the E-Transit a compelling offering. The company already has about 1,800 commercial-vehicle dealers worldwide, including over 600 in the U.S. — most of which are already certified to sell and service electric vehicles.