There is little doubt that Netflix (NASDAQ:NFLX) has benefited from the pandemic. Worldwide orders to stay home caused massive demand for binge-worthy shows. With news that a jointly developed COVID-19 vaccine from Pfizer and BioNTech appeared to be more than 90% effective in a Phase 3 study, shares of so-called stay-at-home stocks have fallen. Fortunately, this short-term thinking presents potential Netflix investors an opportunity. The streaming giant was a solid growth story before COVID-19, and nothing has changed.

When Netflix reported its most recent earnings, investors seemed disappointed because the company only added 2.2 million  subscribers, compared to expectations for 2.5 million. However, Netflix's 2020 overall subscriber numbers reveal the streaming giant is still playing with a massive lead.

Through three quarters, Netflix has outperformed its own paying subscriber projections by 11.1 million. It seems a near-certainty that Netflix will smash its previous annual high of adding 28.6 million  paying subscribers. 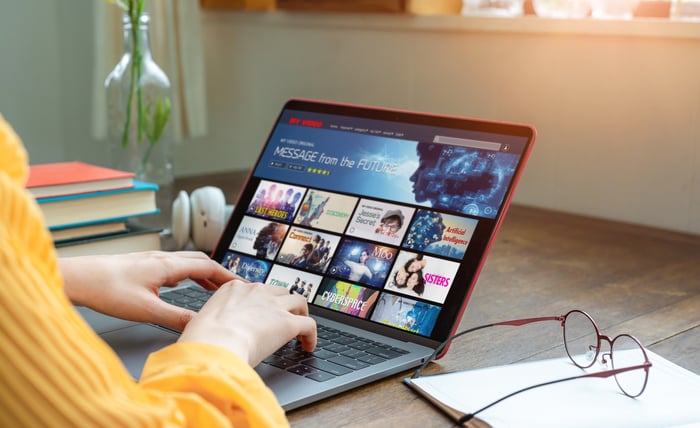 Between  2016 and 2019, Netflix beat subscriber estimates roughly 70% of the time . If history is any guide, Netflix will continue to grow, and the short-term downdraft in the stock could represent a buying opportunity.

A recommendation that makes sense

According to Nielsen Total Audience Report, one of the most important factors to subscribers when choosing a streaming service is its recommendations engine. If we compare Netflix's recommendations relative to what Walt Disney's (NYSE:DIS) Disney+ or AT&T's HBO Max service offer, there is a clear first mover advantage.

Netflix has been leveraging recommendations and viewing data for years to help subscribers find their next great binge-worthy show. , According to the streaming giant, in 2012 its recommendation engine generated 75% of viewership. By 2019, Netflix reported that recommendations generated 80% of views.

However, Disney+ lacks a user feedback system . That means it has to wait for its subscribers to watch enough shows for the recommendation engine to make logical suggestions. Including user feedback would allow subscribers to interact with the service, instead of just having information on what they watch passively collected. More importantly, users feel like they are being "heard" when they click a thumbs-up or thumbs-down on a show or movie. Given the push in nearly every industry to collect customer preferences, it seems odd that Disney+ isn't asking for direct feedback on its content. While it's true that Disney+ could include this option in the future, Netflix has a multiyear lead collecting subscriber likes and dislikes.

HBO Max offers a different perspective on recommendations, with celebrity-curated watchlists. Unfortunately, the streaming service suffers from a much larger issue – HBO Max is still not available on either Roku (NASDAQ:ROKU) or Amazon.com (NASDAQ:AMZN) FireTV devices. Not having access to two platforms that control an estimated 70% of the domestic streaming media player market, means recommendations are a distant secondary concern.

A different kind of leverage

Netflix's management has maintained for years that it would reap bigger future profits by growing its subscriber base. The pandemic has seemingly pulled forward significant demand for the service. As Netflix's subscriber base grows and its revenue increases, the company is able to spend money more efficiently, spreading out the fixed costs of making lots of shows over a broader pool of paying customers, and potentially boosting its profits and cash flow.

If we look at some of Netflix's expenses as a percentage of revenue over the last few years, management seems to be making progress toward a more profitable future.

These  expense percentages have fallen not because Netflix cut its spending, but because revenue is growing even faster. The company showed its cash-generating potential by producing more than $1 billion in free cash flow during its most recent three-month period. Investors who are worried about when Netflix will become self-sustaining are getting an early glimpse of what the company's future earnings reports could contain.

Though Netflix and Roku are being lumped together as "stay-at-home" stocks, their business models are completely different. Roku makes most of its money from the Roku channel and from advertising . For Roku to increase its revenue, customers need to watch more videos. If subscribers watch more, Roku can show more advertising and make more money.

By comparison, Netflix generates revenue from subscriptions. This means that whether users watch one video a month or three videos a day, they each pay the same monthly fee. Since Netflix has seen record-breaking subscriber growth during 2020, it will enjoy recurring, predictable revenue for as long as it can retain these new customers.

If an effective COVID-19 vaccine allows people to go back to "normal" life, Netflix's subscription income should be relatively unaffected. On the flip side, fewer people stuck at home watching the Roku channel means less potential advertising dollars.

In addition, consumers greeted Netflix's recent domestic price increase with a yawn. By comparison, in 2011 Netflix tried to separate its streaming and DVD rental businesses, with what amounted to a nearly 60% price increase. Customers got upset, the company promptly lost about 800,000 subscribers, and the stock nosedived more than 70% in four months. By 2019, Netflix increased prices, and USA Today suggested subscribers might downgrade or cancel the service. In typical 2020 fashion -- nothing seems normal this year -- Netflix increases prices, and customers barely notice.

The shares aren't without risk, with a full-year 2021 projected P/E ratio of about 53. Offsetting this relatively high P/E ratio, analysts are projecting earnings-per-share growth during 2021 of nearly 44%. Netflix seems nearly guaranteed to set a new record for subscriber growth in 2020. The company is getting better leverage over its costs year by year, and seems to have pricing power to spare. Instead of wondering which new company might be the next big thing, investors looking for a growth stock might want to keep an eye on Netflix.