Advanced Micro Devices (NASDAQ:AMD) made waves earlier this month when it unveiled its latest lineup of graphics cards, the RX 6000 series. After trying and failing to effectively compete with rival NVIDIA (NASDAQ:NVDA) for years in the high-end portion of the graphics card market, AMD's own benchmarks suggest the company has finally succeeded with its trio of RX 6000 cards.

There's an important caveat to AMD's benchmarks: The company is using a technology called Smart Access Memory, which AMD claims provides up to 11% extra performance. The feature is only available on systems with an AMD Ryzen 5000 processor, an RX 6000 graphics card, and an AMD 500 series motherboard.

What this means is that the performance of AMD's new graphics cards will likely fall short of the company's benchmarks on systems that don't meet those requirements. For owners of Intel-based systems, AMD's RX 6000 graphics cards may not be the clear winner. 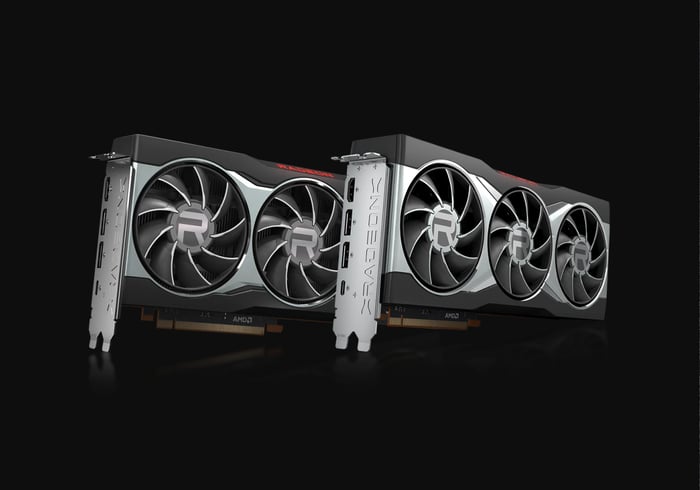 AMD hasn't gone into much detail about how its Smart Access Memory works, but NVIDIA seems to think its not a big deal. The company recently said in a statement that it's working on a similar feature for its latest line of Ampere graphics cards, which it plans to enable soon. NVIDIA believes AMD's Smart Access Memory uses a feature that is already available on most modern motherboards.

NVIDIA's version of this memory bandwidth-boosting feature will work with AMD and Intel processors, and it won't require a high-end motherboard. The company said it has achieved similar performance gains using the feature in early testing compared to what AMD has claimed.

If NVIDIA is right about how AMD's Smart Access Memory feature works, there should be no reason why AMD couldn't also make it work on non-AMD platforms. Either way, it looks like AMD's performance advantage over NVIDIA is going to be diminished, and possibly erased completely, once NVIDIA enables this feature.

One thing that's unclear: If enabling this feature on NVIDIA graphics cards is just a matter of a software update, why wasn't it enabled all along? NVIDIA waiting until AMD touted this feature before enabling it could hurt the company's brand loyalty.

Regardless of how this all shakes out, AMD has produced high-end graphics cards that are capable of competing with NVIDIA's flagship cards for the first time in years. That's an accomplishment, and it should allow AMD to win some high-end market share.

Of course, that doesn't mean that AMD stock is automatically a good investment. Shares of AMD have soared this year, and the company is now valued at around $100 billion, or over 11 times annual sales and over 100 times earnings. AMD is a semiconductor company, not a software company, so it's hard to justify those ratios no matter the optimism around new products.

Whether AMD the stock is a good investment or not, it's clear that AMD the company is firing on all cylinders. AMD has how caught up to Intel in the CPU market and NVIDIA in the GPU market. If you had suggested this would happen five years ago, you would have been laughed out of the room. No one's laughing at AMD now.