Quibi, we hardly knew ye: After just a few months of existence, viewers are saying goodbye to one of the most unique streaming services ever to challenge Netflix (NASDAQ:NFLX) for streaming supremacy.

Quibi's business plan was certainly bold. The service's "quick bites" of content were designed to be consumed in short bursts. Quibi wasn't constrained by the half-hour and hourlong norms of traditional TV, and its super-short content was intended to be viewed primarily on mobile devices. These interesting ideas didn't really work, though, and other streaming services might be wise to consider the reasons why.

Here are three reasons Quibi's tenure ended up being as unusually short as its videos. 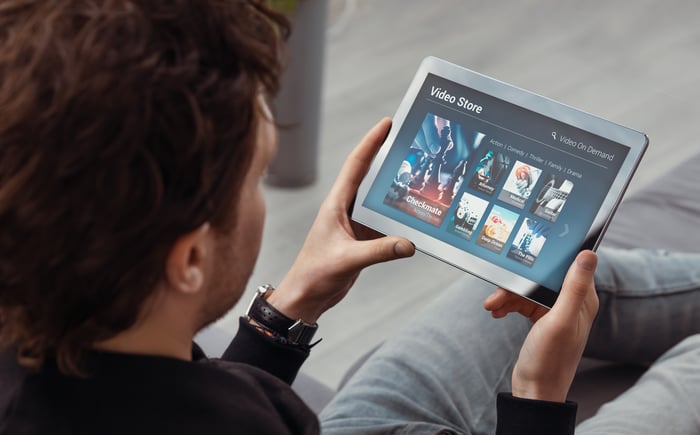 Quibi's goal was to meet viewers where they were -- namely, in the middle of a fast-paced world. Quibi focused on delivering video on mobile devices, and its unusual short-form videos were supposed to be the perfect size for a sneaky stream in the office bathroom or a quick bit of content on the morning commute (the brand name itself was a portmanteau of "quick bites").

It didn't work, but that doesn't mean it couldn't have -- the reality is that we'll never know how Quibi would have fared in the environment it was designed for because Quibi launched in a suddenly transformed world. Released in the midst of the COVID-19 pandemic, Quibi was destined to not be watched in offices or on public transit. Just as Quibi arrived with its convenient on-the-go streaming solution, Americans were stuck at home, binge-watching more than ever. It was a favorable moment for video game stocks and streaming video stocks, but not the right time for a highly mobile solution with super-short videos. Quibi's particular approach could not have been more poorly suited to the moment.

Quibi was designed with one clear use case in mind. But it might have survived longer had its designers considered other possibilities. Short-form videos and convenient mobile viewing features like portrait-mode cropping were all well and good for streamers on the go, but what about streamers at home? After all, there is a big difference between being best for a particular use case and being made only for that use case.

At launch, Quibi seemed over-committed to its bit. It wasn't a version of Netflix that was better for mobile users; it was a service for mobile users that was utterly useless for those at home. The most glaring example of this was Quibi's platform support. Quibi lacked apps for Roku (NASDAQ:ROKU) and for Amazon's (NASDAQ:AMZN) Fire TV platform, the two biggest streaming platforms on the market -- and it lacked support for all other notable home entertainment platforms, too. Even Alphabet's (NASDAQ:GOOG) (NASDAQ:GOOGL) Chromecast devices -- explicitly designed to make it easy to put mobile device streams up on home televisions -- were not supported at launch, though Quibi eventually added them, as well as support for Apple's (NASDAQ:AAPL) Airplay casting protocol.

3. The shows were bad

Saying that Quibi's shows were "bad" is not exactly quantitative analysis. But ignoring this factor in Quibi's demise would be silly. Quibi's whole schtick was its brand-new format, which meant that it needed brand-new content (only a few shows on Quibi, like Reno 911, were clearly connected to pre-Quibi content). And Quibi's content was universally panned. Reviewers couldn't stand the new shows, and there's no evidence that regular viewers were any more sympathetic.

With all of the derision aimed at Quibi's unusual short-form and mobile experiments, the fact that its content was so poorly received is sometimes forgotten. But this factor might be the single most important one, and that's useful to remember in the context of other streaming services -- especially at a time when virtually all streaming services are being forced to rely more heavily on their original content.

Are there lessons for other services to learn from Quibi's failure?

Just a short time after Quibi's shuttering, the streaming service already seems to be disappearing from the cultural memory. But is its demise one that other streaming services can afford to ignore?

To be sure, services like Disney's (NYSE:DIS) Hulu and fast-growing Disney+ don't have Quibi's problems with home entertainment platform support. But Quibi's failure as a mobile-only (and, later, mobile-and-screencasting-only) service do drive home the stakes of platform disputes like the one that kept AT&T's (NYSE:T) AT&T TV Now streaming service off Roku for a while.

Perhaps more important are the lessons related to content. Netflix, among others, is taking this issue seriously: The company will spend more than $17 billion on content this year, a number that's impressive even in the context of years of high spending.

The simplest lesson of Quibi's demise is that fundamentals still matter. A creative content approach is not enough if the basics -- extensive platform support and big content investments -- are ignored. It's a lesson that some streaming services, like Netflix, may not need. But for others, it's a chilling reminder. AT&T's HBO Max is still not on Roku or Fire TV. Apple's Apple TV+ has similar platform support issues, and is also lagging in the original content race. These are weaknesses that these streaming services need to shore up unless they want their bite of the streaming market to evaporate as quickly as Quibi's has.