Amazon.com (NASDAQ:AMZN) is locked in a three-way battle with Walmart and local player Reliance Retail for a piece of the Indian e-commerce market. All three players have been trying their hands at different strategies to corner larger shares of this huge opportunity, but Amazon's dominance in India's booming smart speaker market could give it an edge over rivals.

This big lead that Amazon enjoys in India's nascent smart speaker market could help the e-commerce giant in more ways than one, and could even support it in its fight against its rivals. Let's see how. 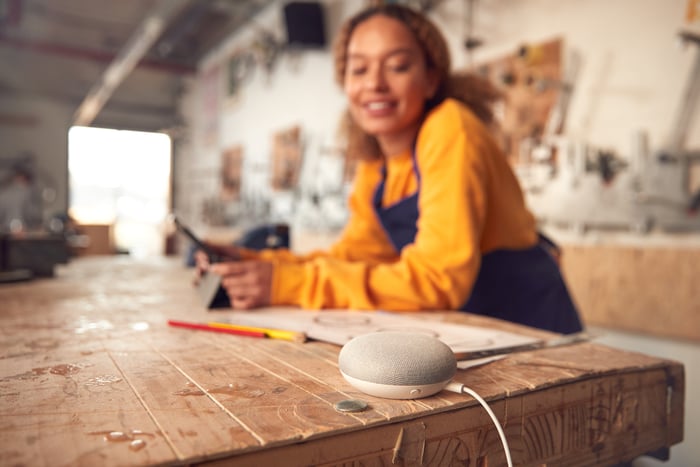 Smart speakers could give Amazon an edge in India

Amazon reportedly controlled 30% of India's e-commerce market at the end of 2018. That number could swell to 35% by 2023, with the Indian market projected to generate $32 billion in gross sales for the company, as RBC Capital markets estimated last year.

However, the emergence of Reliance-owned JioMart in the Indian e-commerce landscape is threatening to upset Amazon's juggernaut. Goldman Sachs estimates that JioMart could quickly ramp up its e-commerce clout in India and control a 31% share of the country's e-commerce market by 2025. For comparison, the newly launched e-commerce platform from Reliance currently holds an estimated 1% of the market.

But taking away market share from Amazon may not be as easy as it sounds for an upstart such as JioMart. After all, the American giant has been quickly scaling up its delivery infrastructure in India, and enrollments in its Prime membership service have been growing at a terrific pace.

Indian management consulting company RedSeer Consulting estimates that there are more than 10 million Amazon Prime users in India that could create demand for a wide variety of services, from streaming video and music to getting faster deliveries and early access to deals.

In fact, despite the stiff competition posed by Walmart and JioMart, Amazon received orders from 99.3% of pin codes in India during the recently concluded month-long festive sale period. The company also pointed out that its Prime membership growth was three times what it was during the same period last year.

Smart speakers are likely to aid Amazon's ecosystem, as the company's Alexa assistant allows customers to order items from the company's platform using their voice. This voice-enabled ordering and checkout could ensure that Amazon's customers don't go to rivals while buying products online.

A survey of 40,000 Amazon customers conducted by a third-party organization a couple of years ago revealed that those who had purchased Echo smart speakers spent 29% more on Amazon over a 12-month period. For comparison, customers who don't use the device reported an increase of 19% in spending.

Amazon's Indian rivals are nowhere to be seen in the smart speaker market right now. This puts it at an advantage, as it gives Amazon another way to boost sales and capture more share -- even apart from the other moves that it is making.

The smart speaker market in India is still quite small, reportedly generating less than $100 million in revenue last year as per third-party estimates. But it is expected to clock high growth rates in the coming years, hitting nearly $760 million in revenue by 2025.

Amazon is in a great position to take advantage of this growth because of a wide portfolio of smart speakers with prices ranging from as low as 3,499 Indian rupees (roughly $47) to the high-end Echo Studio priced at 22,999 rupees (almost $310 at the current exchange rate). Techarc estimates that the average price of a smart speaker in India during the July-to-September quarter stood at 6,100 rupees (around $82).

So Amazon could keep dominating India's budding smart speaker market because of accessible pricing, and that could eventually help the company make a bigger dent in the country's retail market by bringing more users into its ecosystem and potentially increasing basket size.