It has been quite a year for NVIDIA (NASDAQ:NVDA) and Advanced Micro Devices (NASDAQ:AMD) shareholders. Both stocks have more than doubled in price over the last 12-month stretch. A new era of computing is dawning, and the semiconductor designers have positioned themselves as leaders in the industry.

Meanwhile, Intel (NASDAQ:INTC) has left the door open to disruption. With Intel's $78 billion-plus in yearly sales to chip away at (compared to just shy of $15 billion and $8.6 billion in sales for NVIDIA and AMD), there is plenty of room for the two upstarts to keep growing. If I had to choose one, I'm going with NVIDIA, but AMD is still a more-than-respectable bet on the future of technology.

NVIDIA flexes its muscles as a computing accelerator

Long gone are NVIDIA's days as a simple video game hardware company. Sure, gaming is still the largest end-market for the graphics processing unit (GPU) pioneer. In fact, sales to video gamers continue to blast higher -- thanks in large part this year to the release of the company's RTX 30 series, which once again pushes the limits in graphics performance.

But NVIDIA's innovation has propelled the use of the GPU well beyond video games. Data centers are geared to overtake gaming as the company's largest sales outlet. NVIDIA has branched out of its basic proficiency with the acquisition of networking hardware company Mellanox. The reasoning is that, while GPUs are well suited to accelerate the computing of complex tasks like AI, that computing power can get throttled if the network can't handle the amount of data being processed. Thus the company's decision to package its GPU bread-and-butter with Mellanox networking gear for data center and cloud computing operators.

More recently, NVIDIA also announced it developed a data processing unit (DPU), another type of specialized chip that coordinates the flow of data into, out of, and within a data center. The DPU is based on ARM Holdings architecture, the semiconductor designer NVIDIA is in the process of purchasing. High-end graphics for video games will always be an important part of NVIDIA's business, but it's clear its growth hinges on high-growth areas like cloud computing and AI. And because of its research and development in this critical area, it's now leading the charge on this front.

AMD ups its R&D game too, and profits should follow

AMD has long played second fiddle to Intel with its lineup of processors, and more recently to NVIDIA with graphics cards. But the company has made great strides in recent years, especially after offloading its manufacturing segment GlobalFoundries during the financial crisis of 2008-09. AMD has used its more streamlined operation ever since to up its research and development, and those efforts have started to yield results.

With these developments, AMD chips are finding their way into an increasing number of desktop and laptop PCs, especially as Intel has fallen behind the technology curve as of late. It isn't boasting the same kind of growth NVIDIA is, but data centers are an expanding market for AMD too. The company's wares are also featured in Sony's PlayStation 5 and Microsoft's Xbox Series X next-gen gaming consoles. Put simply, this company is no longer an underdog in the semiconductor universe.

Not to be left out of the acquisition race, AMD also recently announced its intent to purchase field-programmable gate array leader Xilinx (NASDAQ:XLNX) in a $35 billion all-stock deal. This opens up another front in its assault on Intel, which got into the field-programmable chip segment itself by purchasing Xilinx competitor Altera back in 2015. Xilinx has far higher profit margins than AMD, so its addition will help AMD continue its journey from a barely profitable middling chip company to a leader in tech design with a robust pipeline of research and development.

Why NVIDIA is the better buy

I think NVIDIA and AMD both have bright futures ahead of them. But I personally prefer NVIDIA, for one simple reason: profit margins. Its chip tech helps it generate ample free cash flow (revenue less cash operating and capital expenses) in good times and bad, with free cash flow profit margin running at nearly 29% over the last 12 months. AMD, on the other hand, is still making progress here -- it was operating in negative free cash flow territory in 2019 during an industry sales downturn. 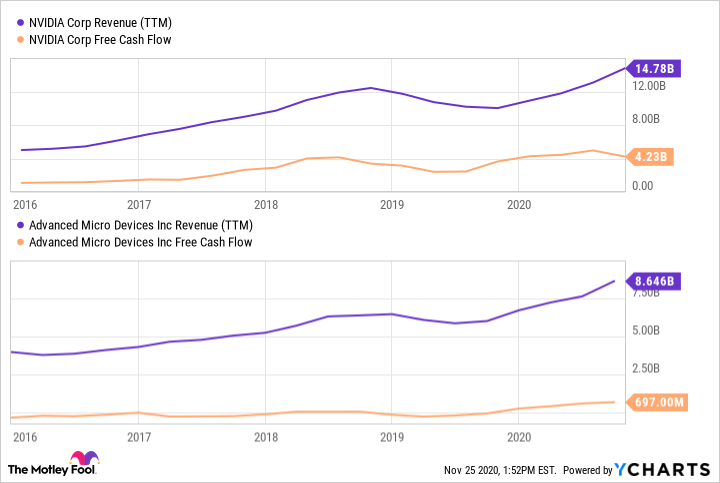 Profits are important for semiconductor companies. They allow them to plow cash into the development of new tech, the key to sustaining long-term growth and bucking the cyclical nature of the businesses. AMD is well on its way to improving its profit profile, but NVIDIA has the lead on this front.

Nevertheless, AMD is still a solid play on the future of computing needs, especially when it adds Xilinx into the mix. If in doubt, buy a little of both. I think NVIDIA and AMD hold plenty of promise over the course of the next decade and beyond as they encroach on Intel's turf and scoop up more market share.