Each company is a large, high-quality name within the semiconductor sector, which rode several tailwinds higher during the eventful month. 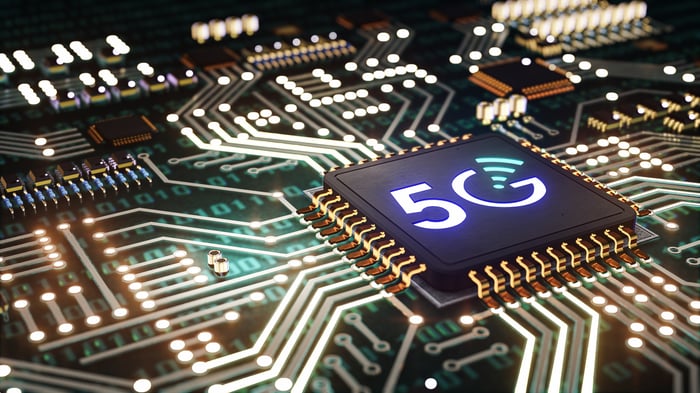 Semiconductor stocks got a boost in November for several reasons. First, in the wake of Joe Biden's election, investors may be thinking that the heightened tensions with China experienced during the Trump administration will cool. The U.S.-China trade war has been a looming threat for many semiconductor and memory-focused stocks, so the prospect of more normalized trade relations has investors in the space feeling giddy. There is also the prospect of more U.S. investment in domestic semiconductor manufacturing capacity under the new administration.

Second, the prospect of a COVID-19 vaccine has many looking forward to an economic recovery next year. Even though the long-term outlook for semiconductor growth remains bright, chip stocks tend to be somewhat cyclical, so an improving economy should spur demand for gadgets and tech-rich appliances.

Qualcomm had an especially good month, as it reported third-quarter earnings in the early part of November that handily beat analyst expectations for both revenue and earnings per share. Additionally, in the middle of the month, Qualcomm received a license to sell some older-generation phone chips to Huawei. Earlier this summer, the U.S. banned sales of all chips to the Chinese handset giant over national security concerns, and then made companies apply for a special license for product exemptions. Qualcomm was the first to receive such an exemption, and the news helped propel the stock even further.

While all three stocks had a good month, all should continue to benefit from secular trends of advanced computing and 5G handsets going into next year and beyond.

Qualcomm is the leader in 5G mobile chipsets, while Broadcom makes a broad array of communications electronics chips, from mobile RF filters for handsets to chips for consumer modems and data centers. Meanwhile, Taiwan Semiconductor is the world's leading semiconductor foundry. It actually makes chips for Qualcomm and most other leading tech companies that adhere to a fabless outsourced foundry model. Due to its superior manufacturing capabilities, Taiwan Semi is the go-to manufacturer for the best 5G chips.

While there could be a cooling-off period after these impressive runs, the long-term picture still looks bright for each of these leading chip names.