Plenty of consumers love video games, but they don't love how they've traditionally been bought.

GameStop ( GME 1.15% ) is fighting the good fight and cheering its prospects, even in the face of incredible adversity. The struggling video gaming retailer reported disappointing revenue and a net loss for the recently-ended third quarter of fiscal 2020. However, management touted a 16.5% year-over-year increase in same-store sales in November. Launches of new PlayStation and Xbox game consoles are driving gamers into a buying frenzy. GameStop CEO George Sherman says that will be a big growth driver throughout the fourth quarter.

When all is said and done, though, Amazon ( AMZN 1.63% ) is still Amazon, and GameStop is still GameStop. The former remains unstoppable, and the latter remains reliant on a dying sliver of the video gaming industry. As such, Amazon is the default winner of any "Which is the better buy?" contest. 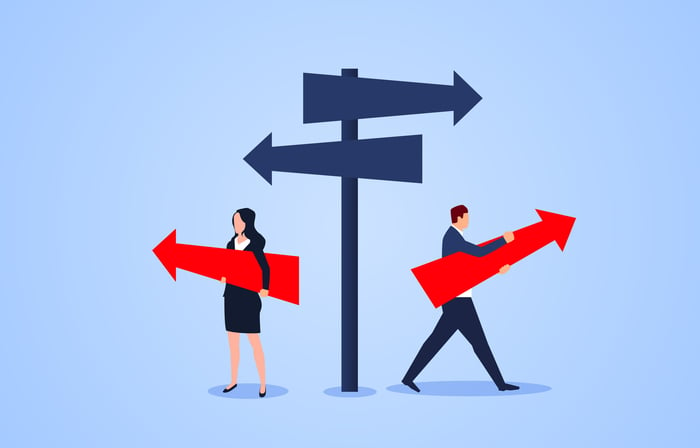 Game over for GameStop

Admittedly, GameStop deserves something of a pass on these weak results because of the pandemic. Consumers are still mostly steering clear of stores. However, market research outfit NPD Group noted last month that U.S. consumers increased the time and money they spent on video gaming by strong double digits in the second and third quarters of this year. It just wasn't being spent at GameStop stores. Gamers have shifted a lot of spending to digital purchases instead.

GameStop's biggest problem will still be around once the mania surrounding the new PlayStation and Xbox consoles fades. That is, physical game disks and game cartridges are a dying breed.

To put things in perspective, digital revenue made up nearly 63% of last year's video gaming revenue, according to S&P Global. At one point, that figure was 0%.

This shift is evident in GameStop's results. Sales and profitability have been falling for years, and the company hasn't turned a full-year adjusted profit since 2018. This downtrend clearly pre-dates COVID-19. As digital downloads became a mainstream means of buying games, GameStop's financial performance deteriorated accordingly.

The trend towards digital downloads will continue. The new generation of PlayStation and Xbox consoles includes all-digital versions that don't even allow for a disc.

This doesn't necessarily mean GameStop is completely dead in the water. It reached a deal with Xbox-maker Microsoft that provides GameStop with a portion of digital revenue produced by Xbox consoles it sells. It also sells toys and collectibles in addition to video games.

There's not a much-needed game-changer for the company anywhere in sight, though. Collectibles accounted for 11.4% of last year's sales, while game software made up more than 46% of its revenue.

By contrast, Amazon has been extremely successful both before and during the pandemic. In 2019, its top line grew 20% year over year, driving a 17% improvement in operating income. Growth has accelerated in 2020. Year to date, sales are up 37%, driving a 68% surge in earnings per share. The company has invested in capacity to meet the swell of demand for online shopping, which will help Amazon maintain its e-commerce dominance even after COVID-19 is in the rearview mirror.

It doesn't take a lot of reading between the lines to understand just how different these two companies are. Both are being affected by major trends in the consumer arena. However, Amazon is benefiting from those trends, while GameStop is a victim of changes within the video gaming market. That makes Amazon the no-brainer buy.