Eastman Kodak (NYSE:KODK) stock has taken shareholders on an absolutely wild ride this year. In the past 12 months, shares traded as high as $60 and as low as $1.50 before settling on $9.69 as of markets' close on Dec. 14. It is almost unheard of for a company that specializes in printing and digital cameras to see such price action.

This kind of volatility has created many millionaires while causing many others to lose almost all of their investment. Should investors ignore the noise and hold onto the stock in hopes that the company could turn around its performance? 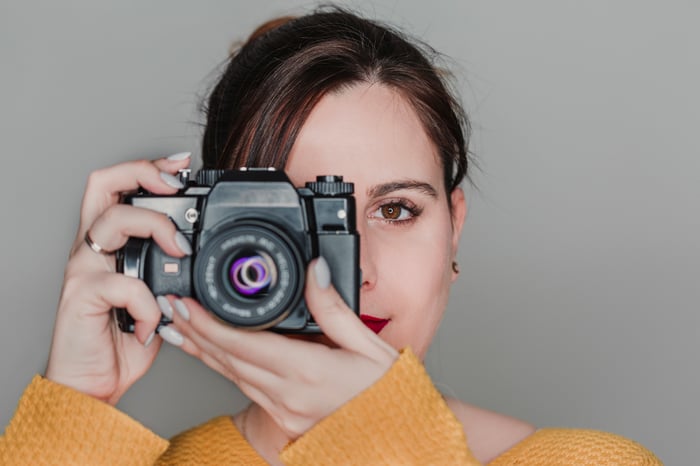 During the third quarter of 2020, Kodak's revenue declined by 20% year over year to $252 million. Loss of subsidiaries, the external effects of COVID-19, and the continuous disruption of the digital camera business by smartphones all contributed to this loss. Simultaneously, the company recorded a $4 million net loss compared to $8 million in profits in Q3 2019. Year to date, the company has burned close to $40 million in cash.

Surprisingly enough, Kodak managed to reduce its debt by about $395 million from first-quarter 2019 to Q3 2020. The company only has $19 million left in outstanding loans, compared to $193 million in cash. Unfortunately, the reduction came not from cash flow from operations, but rather a $320 million sale of its flexography packaging business. When a company sells its assets to pay back debt, it reduces its future revenues, creating a critical need for new opportunities in order to grow its top line.

The catalyst may come after all

On Dec. 6, the inspector general for the U.S. International Development Finance Corporation (DFC) announced that it found no wrongdoings among agency staff in their plans to loan Kodak $765 million for producing generic pharmaceutical ingredients. In July, Kodak executives received lavish stock options before the announcement of the deal and a subsequent 3,000% surge in its stock price. The loan is now on hold pending the outcome of congressional investigations as well as an investigation by the Securities and Exchange Commission (SEC).

The loan value accounts for about 63% of Kodak's assets and could help turn around the company's business. That outcome, however, is far from certain.

Right now, it's still unclear as to whether or not Kodak can receive the loan. Kodak has reported that it plans to continue to move forward with growing its pharmaceuticals business regardless of the outcome of SEC and congressional reviews. But even if the company can secure the loan, there is no guarantee that it can turn a profit through its new drug materials segment.

The U.S. Food and Drug Administration is approving a record number of generics to make prescription medications more affordable for all. As a result, even the best in the generic medications industry have profit margins of just 8%. Many others are even worse off, bleeding cash with net margins of negative 46%.

If Kodak manages to seal the deal but cannot make money to pay back the loan, then it would be in huge trouble (once again). One point in favor of a Kodak investment, however, is that the company is incredibly cheap. It has a market cap of just $747 million and a price-to-revenue ratio of only 0.44.

Overall, Kodak stock remains a toss-up. There are arguably large gains at play, assuming the deal and subsequent operations go right. Conversely, the share price is at stake should the company fail to receive the loan or make a positive bottom line off it. If you want to trade around the upcoming volatile stock movements, that's probably a good idea. For those who want to buy and hold shares for the long term, I'd suggest avoiding Kodak in 2021 and checking out alternatives in the healthcare sector.