Match Group (NASDAQ:MTCH), the owner of Tinder and the dominant player in online dating apps, has seen its stock rise over 1,000% since its initial public offering (IPO) in 2015. Bumble, one of Match's only sizable direct competitors, is rumored to be heading for an IPO itself sometime early in 2021 at a valuation of $6 billion to $8 billion. With Match stock trading near all-time highs, should investors be worried that Bumble is coming for its thunder?

Let's dig into the numbers and find out. 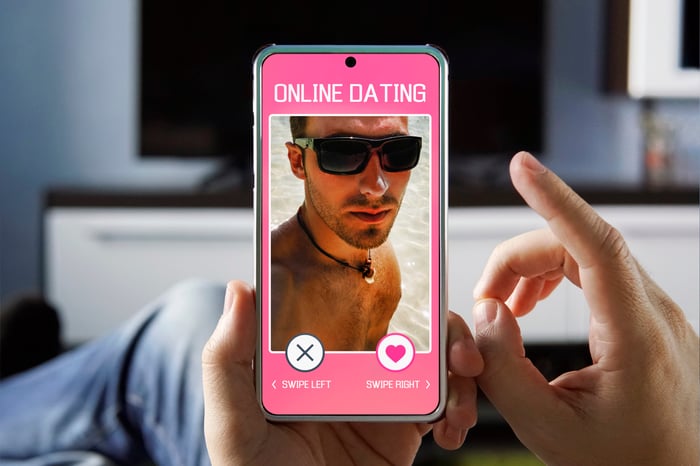 Match and Bumble by the numbers

In the third quarter, Match increased total paying subscribers by 12% to 10.8 million (6.6 million of which are at Tinder), with total revenue increasing 18% to $640 million. The company is notoriously cryptic about releasing downloads or the number of active users across its services, but according to App Annie, Tinder has been the number-one downloaded dating app worldwide in the last 12 months. It also owns Hinge, a rapidly growing relationship-focused app (users were up 82% year to date) and many other online dating properties.

Contrast that with Bumble, which is fairly open about its user numbers, but less so about paying subscribers. It reportedly passed 100 million users in July; however, it is not known how many are paying subscribers or how the company defines an "active" user.

With no apples-to-apples comparison on a user basis, the best way to evaluate Bumble vs. Match Group is to compare revenue. Bumble will reportedly hit $300 million in sales this year, while Match is on pace for $2.4 billion, or eight times as much. This shows that while Bumble states it has a lot of users, at the moment it is not monetizing them as well.

The companies have a history

Tinder and Bumble have a tumultuous history, with Bumble founder/CEO Whitney Wolfe Herd at the center. Herd was an early employee at Tinder, but left in 2014 after her relationship with co-founder Justin Mateen ended on bad terms. She then launched Bumble and still sits at the helm today.

The companies have had many disputes over the years, with both suing each other on separate occasions. Match Group actually tried to acquire Bumble in 2017, but, as you might expect, nothing ever materialized.

Right now, nothing. While Bumble is growing quickly and may put out some impressive numbers ahead of its public offering, there is no evidence one app will win the entire dating market. In fact, Match Group seems to have a strategy of cannibalizing itself, with Tinder dominating the story over the last five years but with multiple smaller apps like Hinge, Pairs, and other international brands growing quickly in 2020.

Investors in Match should be focused on a few metrics. One is total paying subscribers, which currently sits at 10.8 million. With only a small percentage of its users paying for services, investors should expect this number to grow for years to come. Another is the operating profit margin, which last quarter was an impressive 31%, and will help it invest in its services without needing to raise outside capital. Lastly, investors should be tracking average-revenue-per-user (ARPU). This number was $0.62 last quarter, up 4% from the prior year. Growth in ARPU is an indicator the company has pricing power with its services.

Right now, Match Group trades at a market cap of $41 billion, giving it a price-to-sales ratio of about 17, assuming it can hit its guidance for the fourth quarter. That is expensive, and investors should be evaluating how much Match Group can improve its financials in order for it to fulfill this valuation. But they shouldn't be scared away by Bumble. The company's growth hasn't affected Match in the past, so why would this change if/when Bumble becomes publicly traded?