U.S. auto demand has come roaring back since plunging at the outset of the COVID-19 pandemic last year. General Motors (NYSE:GM) has been one of the biggest winners. On Tuesday, the automaker reported an impressive year-over-year increase in domestic vehicle deliveries for the fourth quarter.

With customers eagerly snapping up GM's priciest and most profitable vehicles, the General is on track to report another strong profit when it releases its quarterly earnings report next month. Furthermore, the company's extremely lean inventory position suggests that 2021 could be a banner year for GM. 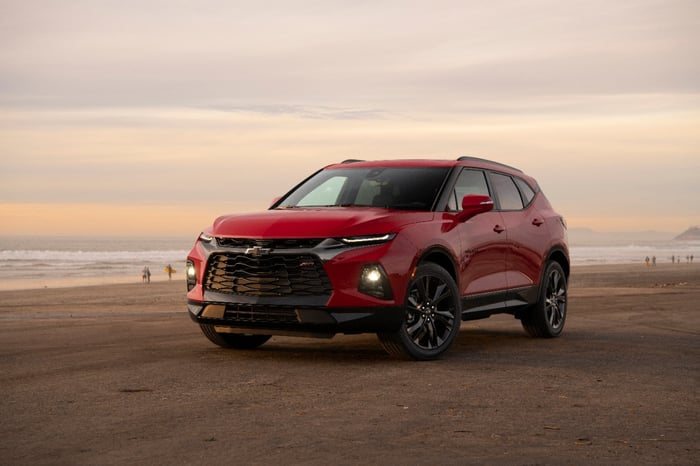 This momentum continued last quarter. Domestic deliveries rose 5% year over year to 771,323 units in Q4, with mid-single-digit growth for the Cadillac and Chevy brands and a double-digit increase for GMC. (Buick sales declined by 10%.) GM's retail sales jumped 12% in the quarter, more than offsetting a decline in fleet deliveries, especially to rental car companies.

Importantly, GM's growth came from higher sales of its most expensive models, which tend to generate correspondingly high profits. Full-size pickup deliveries jumped 11% to 257,815 units. Within the full-size pickup segment, GM benefited from a mix shift toward crew-cab models and from the Chevy Silverado toward the higher-priced GMC Sierra.

GM's all-new full-size SUV models also sparkled last quarter, with domestic deliveries surging 25% year over year. So did the Chevy Corvette. Sales rocketed to 8,992 units from 3,491 a year ago, as production of the first-ever mid-engine Corvette ramped up. Finally, GM's midsize pickups posted a 15% year-over-year increase in deliveries in Q4, partially making up for weaker sales results earlier in the year.

Another earnings beat on tap?

General Motors crushed analysts' expectations with its stellar Q3 earnings results. Analysts have hiked their earnings estimates in response, raising the average Q4 EPS estimate to $1.91 from $1.08 three months ago. Nevertheless, there could still be upside to that figure, given how well the General's priciest products sold in the U.S. and the tame promotional environment.

In fact, GM's average transaction prices (ATPs) reached a record of $41,886 in the U.S. last quarter, up 11.5% year over year. Meanwhile, incentives averaged 10.7% of ATPs, compared to 14.1% a year ago. This puts the company in great shape for another earnings beat. Ultimately, it may come down to GM's results in its international markets.

In its recent sales release, General Motors also disclosed that it ended the year with domestic inventory of just 410,875 units, down 33% year over year. Just two years ago, domestic inventory exceeded 750,000 units. Inventory is likely even tighter for many of GM's top-selling models.

GM's sales growth last quarter was particularly impressive in light of its inventory constraints, pointing to pent-up demand. Lean inventory will also help the company stay disciplined with respect to incentive spending in 2021. Importantly, it also provides a significant opportunity to generate revenue by rebuilding inventory over the course of the year. (Automakers book revenue when they ship a vehicle, not when it's delivered to the final customer.) While GM doesn't expect to return to 2018 inventory levels, it will likely try to boost inventory to at least 600,000 units by year-end.

Despite all of these positive signs, the average 2021 analyst EPS estimate currently sits at $5.76. That's near the low end of the unofficial guidance range that management provided two months ago, even though GM's forecasts tend to be conservative.