The company issues one guidance forecast and then immediately issues another!

Firearms ammunition manufacturer Ammo ( POWW -0.16% ), a virtually unheard-of penny stock up till a few months ago, roared into the headlines last week after forecasting a nearly 500% year-over-year sales increase in its fiscal 2021 third quarter.

And now Ammo is doing it again. Its stock rose 28% by 2:45 p.m. EST on Tuesday after Ammo announced this morning that it expects to post a 317% year-over-year increase in fourth-quarter 2021 revenue. 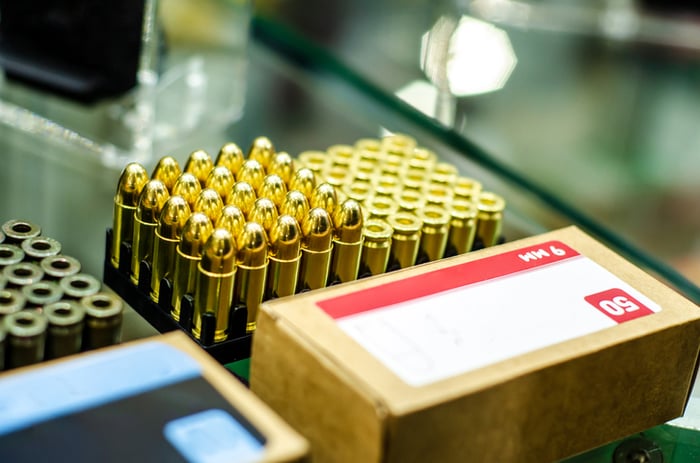 What Ammo is doing here is pretty unusual. It hasn't actually issued official financial numbers for the third quarter, and won't do so before Feb. 15, still more than a month away. Nonetheless, without knowing precisely how the third quarter turned out, the company is rushing out numbers on the fourth quarter as well, promising $20 million in revenue for the period and a fourth straight quarter of year-over-year triple-digit sales growth.

The company also estimated its full-year revenue at $58.2 million, which Ammo says will amount to a 293% increase over fiscal 2020.

In more than a decade of financial writing, I've never heard of a company announcing preliminary sales for one quarter, and then immediately predicting sales for another quarter as well.

But Ammo explains that "given the recent outcome of the U.S. Senate elections in Georgia, the resulting political uncertainty and impact upon the ammunition and gun industry," it's pretty confident that demand for ammunition is soaring this year -- enough to predict what it will sell several months before it's actually been sold.

Now all Ammo has to do is actually sell all that ammo, and prove that its shareholders were right to trust it.