Please ensure Javascript is enabled for purposes of website accessibility
Log In Help Join The Motley Fool
Free Article Join Over 1 Million Premium Members And Get More In-Depth Stock Guidance and Research
By Matthew DiLallo - Jan 17, 2021 at 10:32AM

Solar energy stocks shone brightly in 2020. The average solar stock in the Invesco Solar ETF surged an eye-popping 233.6% last year. It wouldn't be surprising if the sector cooled off in 2021.

However, solar energy has an incredibly sunny future. It's on track to become the lowest-cost form of bulk power over the next couple of years, and that's with the extra cost of battery storage. Industry experts expect the sector to grow at a more than 15% annual clip through the end of the decade. While many companies should benefit from that upside, Brookfield Renewable (BEP 2.34%)(BEPC 2.68%) is as well-positioned as any. That upside potential is why I still love this solar energy stock despite the more than 85% run-up in its shares over the past year. 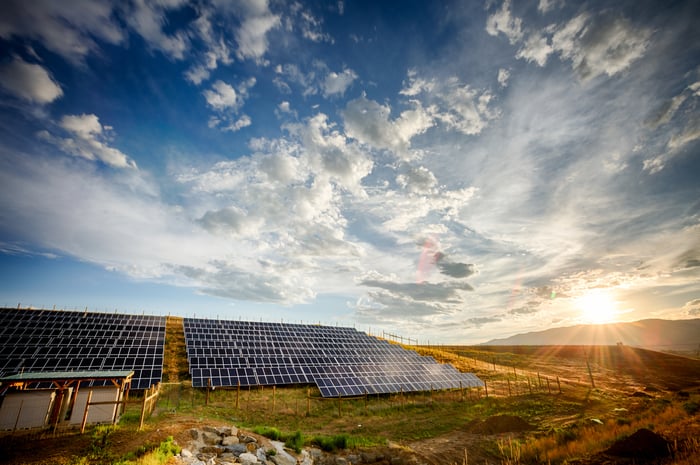 From nonexistent to meaningful in less than five years

Brookfield Renewable didn't operate any solar energy assets five years ago. However, thanks to rapidly falling costs, solar energy investments are generating strong investment returns. That led Brookfield to start building out its solar energy platform via a series of acquisitions, starting with its investments in TerraForm Power and TerraForm Global in 2017. The following year, it formed a partnership with a leading logistics and industrial facility owner in China to develop rooftop solar projects on commercial buildings in that country. In 2019, it created a joint venture with private equity giant KKR (KKR) to buy solar energy project developer X-Elio. Meanwhile, over the past several quarters, it has acquired a handful of solar energy development projects in Brazil, including one of the world's largest solar energy developments and Exelon's (EXC 0.47%) solar energy business.

Brookfield now owns about 3.5 gigawatts (GW) of operating solar energy capacity. Solar now contributes roughly 9% of its annual cash flow. While that makes it a relatively small portion of its overall business, it's not bad considering that Brookfield didn't own any solar energy assets a few years ago.

What really stands out about Brookfield's solar business is its growth potential. The company has focused on acquiring development pipelines in recent years. For example, X-Elio's primary draw wasn't its 273 megawatts (MW) of operating assets, but the 1.413 GW of solar projects under construction and a broader pipeline of 4.8 GW of projects. Similarly, one of the reasons it bought Exelon's solar business was the more than 700 MW development pipeline that came with its 360 MW operating portfolio.

Because of its focus on buying solar businesses with development potential, Brookfield now has more than 10 GW of solar energy projects in its pipeline. That's more than half of its overall 18.3 GW renewable energy backlog. Solar power will be one of its main growth drivers in the coming years.

Brookfield wrote in its second-quarter shareholder letter that "it is possible that 10 years from now, the majority of the production capacity of Brookfield Renewable will be solar capacity." That's not because it doesn't believe in wind or hydro, but because of the strong returns it can earn from solar investments, which will allow it to grow this business at a much faster pace.

For example, Brookfield's major Brazilian solar project development will likely generate more than 20% returns on investment. That's partly due to Brookfield's growing scale, which is enabling it to drive down equipment, installation, and operating costs to create even more value from its solar energy investments. With returns like that on such a massive project, it's no wonder why Brookfield sees such a bright future in solar energy.

Still a great buy for the long-term this year

While Brookfield could cool off this year following last year's red-hot run, the company should still generate strong returns in the coming years. Powering that view is Brookfield's high-return solar energy pipeline and 2.4%-yielding dividend, which it should grow at a high single-digit annual pace. That long-term upside potential makes it stand out as an outstanding solar energy stock to hold for the long haul.