Please ensure Javascript is enabled for purposes of website accessibility
Log In Help Join The Motley Fool
Free Article Join Over 1 Million Premium Members And Get More In-Depth Stock Guidance and Research
By Rich Smith - Jan 19, 2021 at 11:01AM

BlackBerry ends its legal feud with Facebook -- but what did BlackBerry get out of it?

Shares of BlackBerry Limited (BB -2.00%), the once smartphone maker that has transformed into a security software specialist, are soaring Tuesday morning -- the first trading day after Bloomberg reported, Friday after close of trading, that BlackBerry has settled a legal dispute with Facebook (FB 1.18%) over the subject of patent royalties. 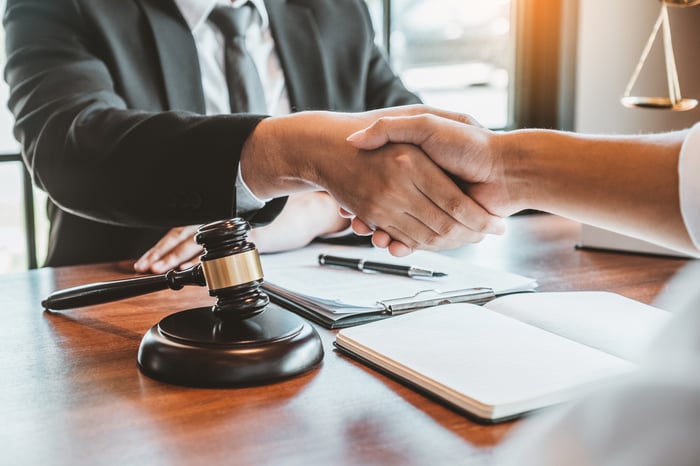 Quoting a BlackBerry spokeswoman, the news agency reports that BlackBerry has "resolved our disputes pursuant to a confidential agreement and have no further comment." Facebook also declined to comment.

It's unknown at present exactly how all this shook out in the settlement. Investors in BlackBerry will be hoping that Facebook has withdrawn its claims against BlackBerry, and that it has agreed to pay the company royalties on its tech (without BlackBerry having to pay royalties of its own).

BlackBerry could certainly use the cash. Through the first three reported quarters of last year, the company's sales declined 10% year over year, and net losses increased seven-fold to $789 million. Although the company is free cash flow positive at present, it's touch and go -- just $25 million in free cash flow, and just $2 million in positive FCF, if you deduct spending on "intangible assets" (which is an ongoing business expense for BlackBerry).

With the profitability of the company at stake, investors will be watching the outcome of this litigation settlement closely.