Please ensure Javascript is enabled for purposes of website accessibility
Log In Help Join The Motley Fool
Free Article Join Over 1 Million Premium Members And Get More In-Depth Stock Guidance and Research
By Jeremy Bowman - Jan 29, 2021 at 6:45AM

It's not just dollars and cents. Your mental health is at stake, too.

If you're thinking about buying GameStop (GME -3.56%)stock, you're not alone.

Google searches for "should I buy GameStop stock" have skyrocketed this week, and the stock name has trended multiple times on Twitter. A combination of a massive short squeeze and gamma squeeze has pushed shares of video game retailer up more than 2,000% at times this year, and plenty of other heavily shorted consumer stocks have surged along with it, like AMC Entertainment, BlackBerry, and Express.

In one version of this story, a group of retail traders who converse on social media site Reddit took on Wall Street hedge funds and won. But for other retail investors in other versions, this story is not going to have a happy ending.

As exciting as the mania around GameStop may seem, there's a simple reason for investors to avoid it and the other stocks that are being squeezed. 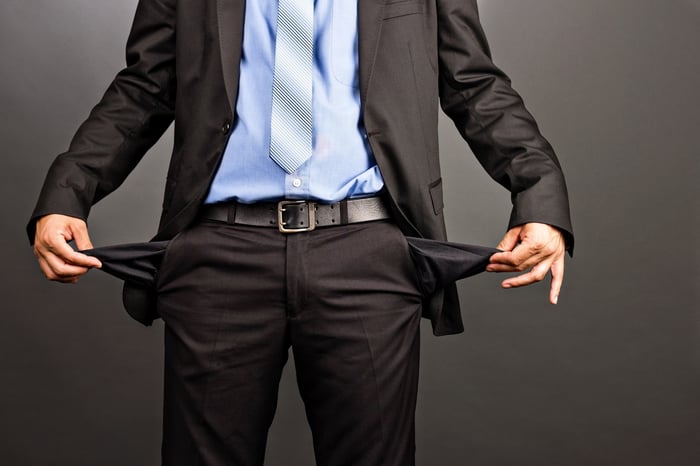 At its best, the stock market is a vehicle for creating generational wealth, and one that can benefit all participants. Though there are always buyers and sellers, everyone can win if sellers are cashing out long-term gains to use those funds for retirement, for example, rather than eating short-term losses.

But at its worst, the stock market is a casino, a giant pool of bettors looking to make a quick score. Not everyone can come out on top in this case, and it quickly devolves into a zero-sum game, with a winner and loser on every trade. The stakes are only exacerbated with options trading, which has driven much of the activity in GameStop and the other squeezes.

When stock trading becomes divorced from fundamentals, as has happened with GameStop and AMC, buying them is no different than taking a spin of the roulette wheel. By doing so, you're essentially gambling that someone will come along and pay more for that stock. This type of speculation -- when traders bid up an asset regardless of its fundamental value -- is sometimes called the greater fool theory on the premise that you can flip those shares to some other sucker. This thinking is common in market bubbles.

One of the most powerful psychological forces in investing and behavioral economics is loss aversion. According to this theory, developed by psychologists Amos Tversky and Daniel Kahnemann, the pain of losses is twice as powerful on one's psyche as the joy of gains. So as a stock trader, you are going to feel the loss of every dollar you lose betting on a stock like GameStop twice as much (on a psychological level) as you would feel the joy from gaining $2 in share value. As volatile as this stock is, that's a lot of pain to compensate for if things go poorly.

With short-term trading and options trading, where greed can easily trigger excessive behavior, I'd take this idea a step further. Even a price gain won't be satisfying because you'll still feel like you could have had a bigger gain had you gotten in sooner, and that kind of approach often leads to greater risk-taking and large, easily preventable losses in the end.

By trading in GameStop and AMC now, normal odds-making would suggest you have a 50/50 chance of the price rising or falling, but psychologically the odds are already against you, and the risk of a big loss financially and psychologically just isn't worth it.

One of the benefits of long-term, buy-and-hold investing is that there's a lot less stress involved than there is in what is essentially day trading. Buy-and-hold means you don't have to monitor every market movement. You just have to find high-quality companies to invest in and stick with them. Take Warren Buffett, one of the best stock investors of all time and a man who built a fortune with precisely this philosophy. Buffett has advised, "Only buy something that you'd be perfectly happy to hold if the market shut down for 10 years."

Remember that a stock is a share of ownership in a business, not a turn at the craps table, and businesses don't double or triple in value overnight -- certainly not without any relevant news.

Make it easy on yourself and your mental state. Buy top-notch stocks and save the gambling for the casino.