The market has gone crazy with these stocks.

Some energy stocks had a phenomenal 2020, led by renewable energy stocks that have high growth potential. But not all growth stocks are created equal.

Some of the hottest energy stocks happen to have uncertain financial futures with losses mounting and little hope for positive cash flow in the near future. That's why three of our contributors think FuelCell Energy (FCEL 0.80%), ElectraMeccanica Vehicles (SOLO -5.18%), and Blink Charging (BLNK -3.57%) are stocks to stay away from right now. 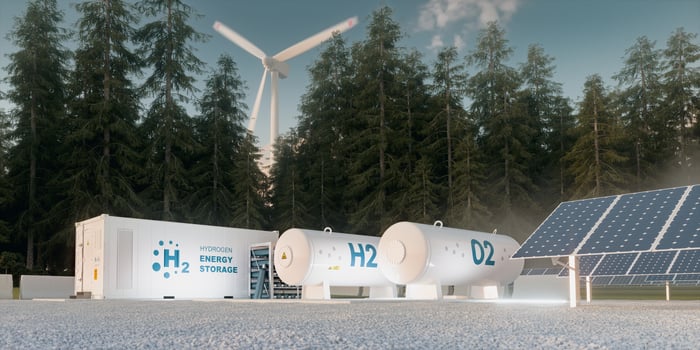 A bad bet on energy

Travis Hoium (FuelCell Energy): There's growing bullishness in the market on the future of hydrogen as an energy and fuel source. And that has powered fuel cell stocks higher, particularly a company conveniently named FuelCell Energy. But this isn't where I would want my energy money today.

Even in a growing industry, companies have to prove they have the right products and strategy. Revenue should be growing, margins should be going up, and there should be at the very least the potential for a profit eventually. FuelCell Energy doesn't show any of that promise and has actually seen revenue decline and losses increase over the last five years. 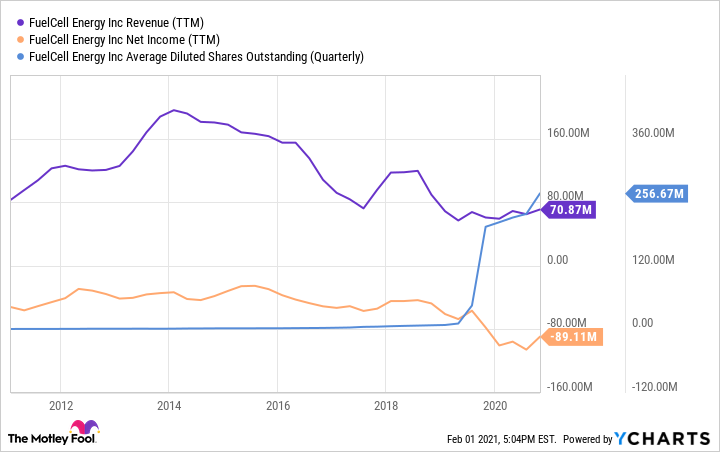 To fill the gap, management is constantly selling shares just to fund operations. In just the last four months, management has raised $254.6 million from equity offerings, further diluting shareholders. And there's no end to the losses in sight.

The chart below may be the most telling to me. FuelCell Energy has consistently been barely break-even on a gross margin basis. And the trend isn't getting better. 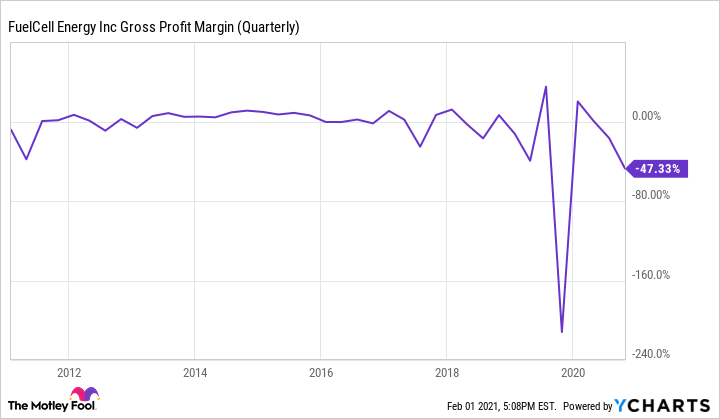 There's simply nothing to like about FuelCell Energy's operations, and if you're looking to get into hydrogen fuel there are better stocks out there.

Howard Smith (ElectraMeccanica Vehicles): Recently, it seems that any company with "electric vehicle" in its product description automatically gets investor interest. There are some good reasons for this, as the electrification of transportation looks like it's here to stay, with a huge runway for growth.

Investors should continue to look under the hood, though, before buying. ElectraMeccanica sells a single-seat, three-wheeled electric vehicle (EV) called the Solo with a 100-mile maximum range and 80 mph top speed. The company also will begin offering a two-seat electric sports car. But third-quarter revenue of about $230,000 makes the company's $605 million market capitalization hard to justify. 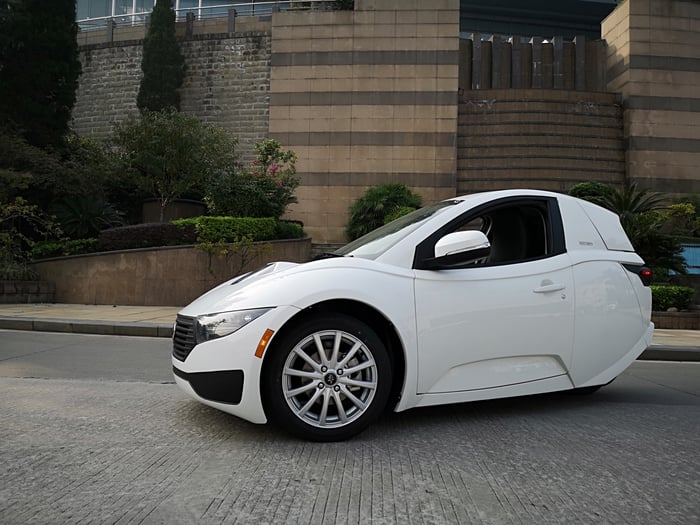 ElectraMeccanica markets its three-wheeled EV as urban commuter transportation for single drivers. While it's a good time for EV interest, it's questionable whether the work-from-home model is here to stay, which could impact interest in the product. The vehicle will sell for $18,500, but whether there will be broad interest remains to be seen.

Through the end of 2020, only 60 vehicles have been produced, mostly for promotional purposes. The company has the capability to produce 20,000 vehicles annually at the Chinese factory of its manufacturing partner. It also plans to build a U.S. assembly plant.

ElectraMeccanica reported a net loss of almost 15 million Canadian dollars in the third quarter ended Sept. 30, 2020, which was almost triple the losses of the previous-year period. Operating losses also grew year over year. The company is well capitalized with about $100 million in cash, but its current valuation is hard to justify. Though production and sales should ramp up this year, even its forward price-to-sales ratio is estimated to be above 40.

There are many EV investing options available with more of a proven market than this specialty producer. Not every one will have successful products, but betting on a more established market opportunity would make more sense than just trying to get in early on this EV maker.

Jason Hall (Blink Charging): Investors are throwing money at clean energy stocks at an enormous rate. And to some extent, for good reason: Renewable energy is going to be a massive part of the future. But at the same time, every company involved isn't set to deliver Tesla-level returns, and many won't survive to turn a single dollar in profit.

To put it bluntly, a lot of investors are going to lose a ton of money throwing money at companies that purport they'll be a big part of the renewable energy future but never deliver profits. One company in particular has already proven very good at that: Blink Charging.

The company has been around for more than a decade and has deployed more than 20,000 charging stations. That sounds really good, right? This should be a company that's surely it's set to profit from the EV explosion.

Not so fast. Blink Charging earned less than $5 million in revenue over the past year, while burning almost $15 million in cash. Cash burn has intensified in recent years, despite no reported research and development spending: 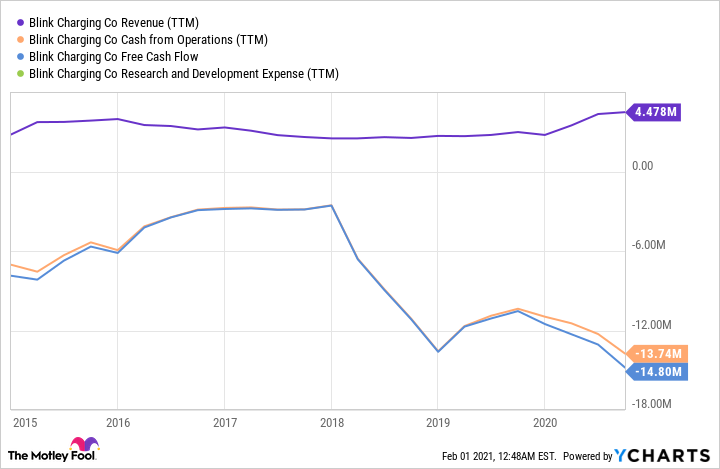 This hasn't stopped investors from bidding its share price up more than 2,500% over the past year. Founder and CEO Michael Farkas has taken advantage of this run-up, selling $22 million worth of stock recently, a savvy move considering those shares were worth under $1.1 million one year prior.

Could Blink be a part of the EV future? Sure, but that doesn't make it worth buying. In more than a decade of existence, Blink Charging has destroyed more than 99% of investor capital. Even with the massive run-up, shares are down almost 99% since the IPO from years and years of secondary offerings to keep the lights on and pay executives.

Not worth the gamble

It's possible these stocks will keep going up, but the underlying businesses aren't in very good shape. And if the market turns from bidding up speculative stocks to putting value on cash flows, these stocks have a long way to fall.