Churchill Capital IV's shares have skyrocketed on pure speculation, raising concerns about valuation. Can Lucid ever grow into such lofty expectations?

It's now been over a month since Bloomberg News broke the news that special-purpose acquisition company (SPAC) Churchill Capital IV (CCIV) was in talks to merge with Lucid Motors, one of the hottest electrical vehicle (EV) start-ups that many regard as "the next Tesla (TSLA -5.88%)." As an early Tesla investor and avid EV enthusiast, I was naturally interested.

It goes without saying that investing based on rumors is extremely risky, but after carefully assessing the risks, credibility of the speculation, and potential upside, I decided to purchase warrants in Churchill Capital IV last month. In the weeks since, Churchill Capital IV shares have continued to skyrocket as new details around the potential deal trickle out. Warrants tend to trade at a discount relative to their intrinsic value, while also exhibiting significant leverage as derivatives. Accordingly, my position is already enjoying massive gains. 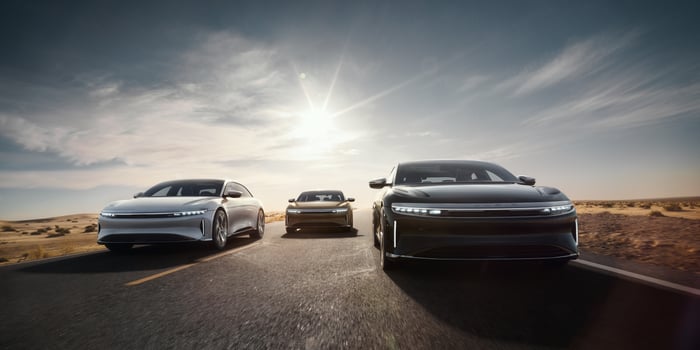 Reuters reported earlier this week that the merger is close to being finalized, with Churchill Capital CEO and renowned dealmaker Michael Klein now lining up PIPE (private investment in public equity) financing. PIPE commitments are generally made at $10 per share, which is typically the net asset value (NAV) for a SPAC. With the report sending shares over $50, Klein should have no trouble securing money from institutional investors that are interested in instant 400% gains (based on current prices). With a deal apparently imminent, here's what I'm excited about -- and what I'm afraid of.

The vast majority of start-ups in the automotive industry fail. Few companies can actually make it to production due to the sheer capital intensity and fixed costs of vehicle programs and manufacturing operations. There was a point in time when Lucid was also on the ropes, back when it was working to secure its Series D funding round that would ultimately help fund construction of its Arizona factory. Lucid then landed a pivotal $1 billion investment from Saudi Arabia's sovereign wealth fund and recently completed the first phase of its manufacturing facility.

There are many parallels between Lucid and Tesla. Not only was Lucid founded by a former Tesla exec and board member, Bernard Tse, but much of senior management are also alumni of the most valuable automaker on the planet. Lucid will also adopt the same go-to-market strategy of selling premium vehicles to fund the development of more affordable models, while building out a network of retail stores that conduct direct sales (state laws permitting). The Gravity SUV is also in the pipeline.

One key difference is that Lucid is not creating its own proprietary charging standard but will instead partner with Volkswagen to leverage its Electrify America network of DC fast chargers. If Tesla represents what a modern car company that emphasizes technology and vertical integration can be, then Lucid is following closely in its spiritual predecessor's footsteps in a plethora of ways. 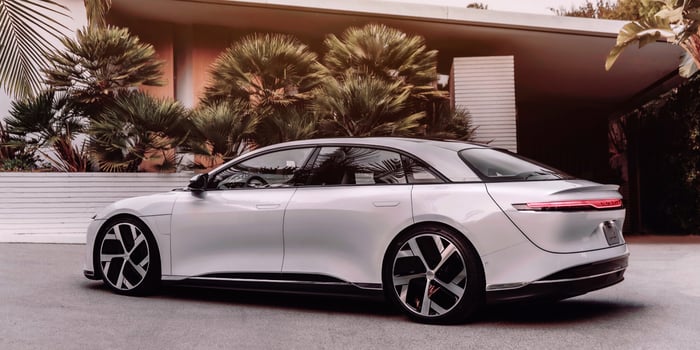 Too much, too fast?

EV SPACs are all the rage currently, and they're arguably approaching bubble territory. Churchill Capital's deal with Lucid values the EV start-up at $12 billion, according to Reuters. But SPAC mergers are also done at $10 per share. With shares trading around $50, that would imply a market cap of around $60 billion -- more than Ford -- for a company that has yet to deliver a single car to consumers.

These are all broad estimates based on media reports and investors won't know more until the deal is officially announced and the merger structure is disclosed (if it goes through), but it's fair to say that a SPAC soaring to over $50 before confirming a target is a bit much. Additionally, investors have no insight into Lucid's detailed financials, so things like operating expenses, cash burn rates, or the balance sheet remain a complete mystery. Obviously, that's also a risk for anyone considering investing in Churchill Capital IV before an agreement is finalized.

Considering the price action over the past month, there are irrefutable concerns around Churchill Capital IV's current valuation. That will create gut-wrenching volatility and the potential for enormous downside risks. I wouldn't be remotely surprised if this turned out to be one of those "buy the rumor, sell the news" situations, but I'm in for the long haul, for better or for worse.

At the same time, Tesla's valuation has seemed absurd for years. Fellow Fool contributor Morgan Housel once pointed out how "conventional [valuation] metrics don't work on unconventional stocks," citing analyst Eddy Elfenbein. With an eccentric billionaire CEO who moonlights as a meme lord, openly contemplates detonating thermonuclear weapons on Mars, and revels in trolling the SEC, Tesla is nothing if not unconventional. Somehow these activities appear to justify Tesla's stock price.

Assuming that Churchill Capital IV can clinch the deal (while lacking the CEO antics), will Lucid fall into the same category once it starts delivering cars?