Please ensure Javascript is enabled for purposes of website accessibility
Log In Help Join The Motley Fool
Free Article Join Over 1 Million Premium Members And Get More In-Depth Stock Guidance and Research
By Trevor Jennewine - Feb 24, 2021 at 11:30AM

This fintech company is innovating rapidly -- and that could mean big gains for investors.

The pandemic turned life upside down and inside out last year, and some of the most pronounced changes it wrought were on our shopping habits. Consumers in general shifted rapidly to using e-commerce for everything from groceries and entertainment to hand sanitizer and face masks.

As a result, PayPal (PYPL 2.23%) had one of the best years in its history. But the future looks even brighter for the fintech company.

Finding its footing in brick-and-mortar shopping

PayPal is popular among online shoppers, but it has also made efforts in recent years to expand its in-store presence. This is for two reasons: First, management estimates PayPal's offline retail market opportunity will reach $8 trillion by 2025. And second, by powering both online and offline payments, PayPal can more deeply engage with consumers. Prior to 2020, the company offered several in-store payment options. For instance, Android users could checkout with tap-and-pay by linking PayPal to Google Pay or Samsung Pay.

But last year, PayPal expanded its in-store portfolio. The company launched the Visa-backed Venmo credit card, enabling users to make purchases on credit and manage monthly payments through the Venmo app. It also introduced QR code payments for mobile app users, enabling them to make in-store purchases by simply scanning a QR code at checkout. And so far, the company's efforts have been successful.

During the most recent earnings call, CEO Dan Schulman told investors that PayPal and Venmo QR codes are now accepted at more than 600,000 retailers, including CVS, Nike, and Five Below. Schulman also noted that, among consumers who frequently use QR codes, merchants have seen double-digit-percentage increases in basket size, and PayPal has benefited from a 19% increase in total payment volume (TPV).

Moreover, Schulman noted that those in-store efforts -- QR codes, tap-and-pay, and payment cards -- resulted in nearly 10 million consumers using PayPal in stores last year. However, the total in-store spend was just $20 billion. That represents only 2% of PayPal's TPV, and far less than 1% of the $8 trillion addressable market.

In other words, even at brick-and-mortar retailers, PayPal still has a big market opportunity. And the company's relentless innovation should help it capture greater market share over time.

The company made other changes last year. For example, users can buy now and pay later, cash checks, receive direct deposits, and pay bills  with PayPal and Venmo. All of these features are aimed at deepening user engagement, and so far the results are encouraging. For instance, Schulman indicated that the buy now and pay later feature contributed $750 million to TPV in the first quarter after its launch. 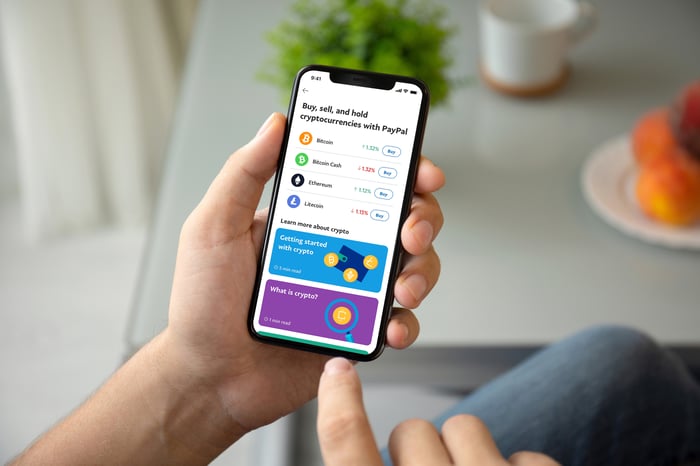 Perhaps most notably, PayPal users can now buy, sell, and hold cryptocurrencies like Bitcoin (BTC -5.10%) within the mobile app. The company plans to extend this functionality to Venmo in the coming months. While it hasn't reported specific numbers, Schulman noted that consumer response had "greatly exceeded" PayPal's projections.

What's more, consumers will be able to pay for their purchases with their Bitcoin balances starting later this quarter. Right now, it's relatively difficult to spend Bitcoin. PayPal's network of 29 million merchants could change that.

The impact on PayPal's business

The wave of new products PayPal rolled out in 2020 helped it achieve record-breaking user growth -- the number of active accounts jumped 24% year over year to 377 million in the fourth quarter. Even better, the company reported 29% growth in the number of daily active users, which indicates increasing user engagement. That's a good sign for investors, because engaged users tend to create more value for a company.

PayPal's performance last year was stellar across the board. But investors in the fintech space should always keep companies like Visa and Mastercard on their radar. While those card payment giants often partner with PayPal, they are still its competitors -- and much more profitable competitors at that.

Even so, PayPal's growing network of merchants and consumers is a strong advantage, and the company's various brand names (PayPal, Venmo, Xoom, Braintree) inspire consumer confidence. That should help it protect and grow its business. As digital payments become more widely adopted, I expect great things from this fintech company.