The SPAC announces plans to combine with an air taxi start-up.

Shares of Reinvent Technology Partners (RTP) spiked 10% higher on Wednesday morning at the open, after the special purpose acquisition company (SPAC) announced plans to merge with air taxi start-up Joby Aviation. The deal brings together a who's who list of backers, and investors are excited by the combination.

Reinvent Technology is a SPAC backed by Reid Hoffman, co-founder of Microsoft's LinkedIn, and Zynga co-founder Mark Pincus. On Wednesday, it said it would merge with Joby in a deal that values the combination at $6.6 billion, with the new Joby Aviation set to take in $1.6 billion in gross proceeds for use in bringing its product to market. 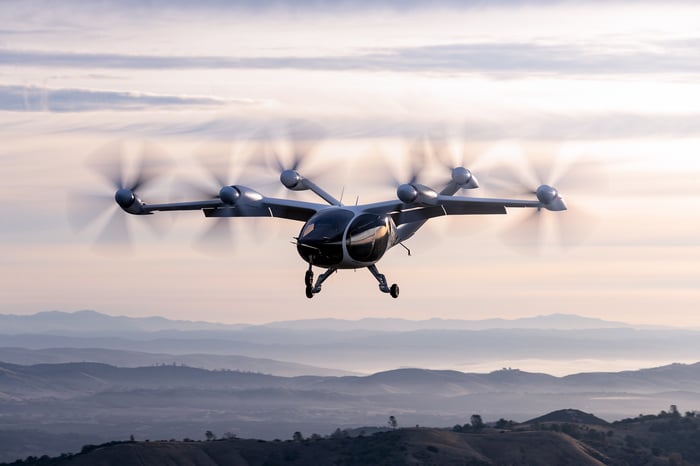 Joby has spent more than a decade developing a crewed electric passenger aircraft capable of vertical takeoffs and landings. The company has flown more than 1,000 test flights to date and has targeted 2024 to begin service. The aircraft would not travel long distances or replace the airline industry anytime soon, but it could provide a more pleasant way to get the airport.

The deal will give Joby a public currency, along with the cash it needs to fund development of its 450,000-square-foot factory with assistance from investor Toyota Motor. Joby also counts Uber Technologies as an investor, and last December Joby bought an Uber unit that was developing air taxis and delivery services.

This is still a prerevenue company with at least three years before it can expect business to be up and running, and lots could go wrong along the way. But Joby is relatively far along in its design and development, as well as in winning regulatory approval from the Federal Aviation Administration.

If the future does involve air taxis flying over congested roadways, Joby seems like a good bet to be a part of it. But given the uncertainty inherent in future-focused companies, anyone interested in buying in would be wise to limit Joby to a small part of a well-diversified portfolio.