Please ensure Javascript is enabled for purposes of website accessibility
Log In Help Join The Motley Fool
Free Article Join Over 1 Million Premium Members And Get More In-Depth Stock Guidance and Research
By John Ballard - Mar 9, 2021 at 7:45AM

The entertainment sector offers plenty of compelling investment opportunities, but you have to invest in the right stocks.

The COVID-19 pandemic created a mess for some industries last year. Entertainment was one of them, depending on what side of the market you look at. Movie theaters and theme parks took a big hit, but more people spending time at home was a windfall for streaming and video game producers.

There are two extremes in the entertainment sector right now. Legacy media stocks, such as cable networks, offer the best value, while the streamers and other digital entertainment providers trade at premium prices. The challenge is to sift through all the choices to find stocks that offer a balance of above-average growth potential and a fair valuation.

Let me show you three stocks I would buy today. 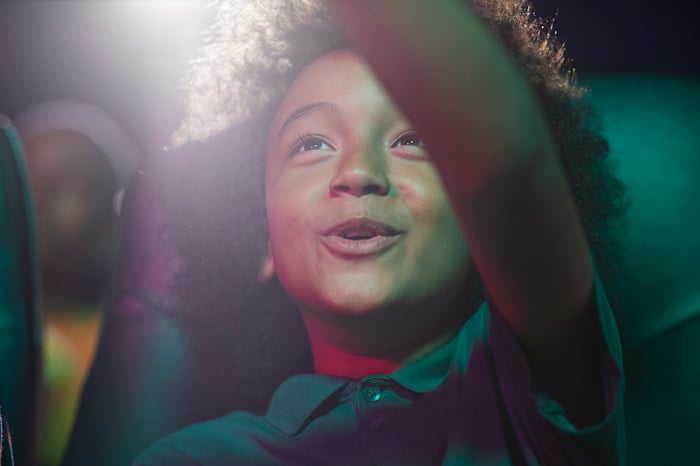 Walt Disney (DIS 3.51%) felt both extremes in the media sector last year, and it's still navigating turbulent waters. In Disney's most recent quarter, revenue from parks, experiences, and products fell 53% year over year.

Meanwhile, revenue from Disney+, ESPN+, and Hulu, which comprise the Mouse's direct-to-consumer business, surged 73% year over year. It only represented a fifth of Disney's total revenue, but there is little doubt that streaming services will become the most valuable part of the Disney empire over time.

Management expects Disney+ alone to reach between 230 million to 260 million subscribers by fiscal 2024, and it's targeting more than 1 billion households worldwide that identify as Disney fans. And Disney has dozens of original series scheduled to launch in the next few years from its Star Wars, Pixar, and Marvel studios to reel more of those subscribers in.

High growth expectations in streaming are the main reason why investors are paying a bigger premium to buy Disney shares than a year ago. Because of the investments in streaming and the recent weak performance at theme parks, Disney's earnings will remain down for the foreseeable future, so the price-to-sales ratio is the best way to assess the value here.

Disney's price-to-sales multiple has roughly doubled to 5.6, which lifted the stock price by a proportionate amount over the last year. But that's still less than half the valuation of Netflix and seems to be a fair trade-off to own a piece of some of the most popular entertainment brands in the world.

Management expects the parks business to recover, and when it does, Disney will be clicking on all cylinders. You'll want to own the stock when that happens, so now's a great time to buy shares.

Mobile games have been experiencing double-digit percentage annual growth for several years, but the pandemic accelerated the shift in this $86 billion market. Smartphones and tablets are getting faster and more capable of running games on par with dedicated game consoles. This should keep mobile in the lead as the largest category of game sales going forward.

Zynga (ZNGA) has a diversified roster of mobile franchises, including the staple Words With Friends. The San Francisco-based company continues to acquire other studios to grow its mobile game portfolio, and launch new games to drive growth, such as the recent Harry Potter: Puzzles & Spells. Overall, Zynga reached record bookings last year of $2.27 billion, for an increase of 45% over the previous year. But it's just getting started.

Management sees enormous growth potential in expanding internationally, growing advertising revenue, and continuing to develop new innovative gaming experiences, including releasing new titles that can be played across multiple platforms, not just mobile. Management believes the culmination of all these initiatives could double the value of the company.

Zynga has outperformed other top gaming stocks over the last five years and should keep the streak going. It now has 134 million monthly active users to monetize. The growth opportunities are abundant in gaming, and at a forward price-to-earnings (P/E) ratio of 25, investors can own one of the top mobile game makers for an average market valuation. 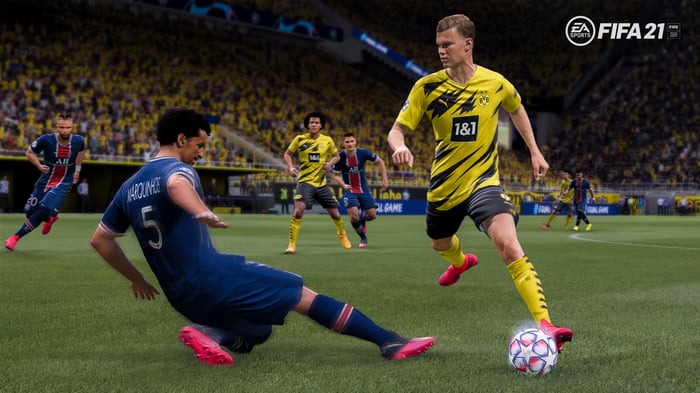 Electronic Arts (EA -0.11%) has a mobile-game portfolio that brings in a small amount of revenue each year, but EA is mostly known for its work on console and PC. Perennial sports titles, like FIFA and Madden, bring in a steady stream of profits. Over the last four quarters, EA generated $5.9 billion in bookings and $1.7 billion in free cash flow.

However, EA just announced the acquisition of Glu Mobile (GLUU) for $2.1 billion, which will pad the top and bottom line. Once the deal closes, Glu Mobile will bring over lucrative mobile franchises, including Tap Sports Baseball, Covet Fashion, and Kim Kardashian: Hollywood. This deal follows the $1.2 billion acquisition of U.K.-based Codemasters, which adds top racing brands like Project CARS to EA's roster of leading sports franchises.

Management clearly sees an opportunity and is putting cash to work to grow the value of the company. The high player engagement trends during the pandemic are showing signs of sticking around. Gamers are out spending hundreds of dollars upgrading their computer components and buying new consoles from Sony and Microsoft, not to mention continued strong sales of the Nintendo Switch.

Top video game stocks should remain a great investment for years to come, as companies continue to invest in game subscription services and live service offerings that allow players to purchase additional content while playing the games they love. EA is on the ball across these fronts with the EA Play subscription service and live service bookings continuing to grow faster than the rest of the business.

The best part: Investors don't have to pay a sky-high valuation. EA offers relatively good value for a growth stock, trading at a forward P/E ratio of 23.7.