Please ensure Javascript is enabled for purposes of website accessibility
Log In Help Join The Motley Fool
Free Article Join Over 1 Million Premium Members And Get More In-Depth Stock Guidance and Research
By Adam Levy - Mar 9, 2021 at 10:12AM

Every retiree over 70 should consider this option to donate.

If charitable giving is a significant part of your retirement plans, you have a lot of options for making your contributions. You can donate cash directly, send appreciated stock to your charities of choice, or use a donor-advised fund to manage your contributions and distributions each year. While each has its pluses and minuses, the best option for many older retirees is a qualified charitable distribution from a traditional IRA. 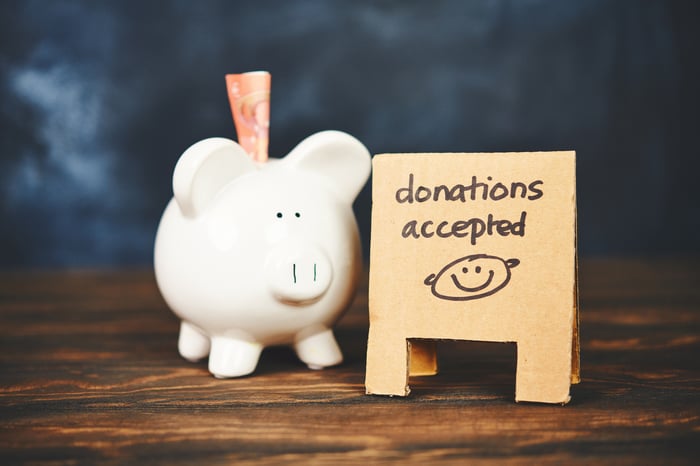 One of the benefits of using a QCD is that the withdrawal counts toward required minimum distributions (RMDs), which begin at age 72. They're limited to $100,000 per taxpayer per year, which will cover the vast majority of RMDs, but it's still important for those interested in writing some big checks for charity.

Importantly, when you make a qualified charitable distribution, you'll receive a 1099-R. You'll see the total distribution listed, but the taxable amount will be $0. That means a QCD doesn't count toward your income like other distributions. Not only does that make the distribution tax-free (as you would expect for charitable donations), but it has other big tax benefits for retirees.

Moving charitable donations above the line

A QCD, in effect, moves the charitable donation above the line by allowing you never to include the distributed IRA money as taxable in the first place. Since the taxable amount of the distribution is $0, it won't affect your adjusted gross income. That means you're free to take the standard deduction and get the full tax benefits of your charitable contribution.

The added benefits of a lower adjusted gross income for retirees

Keeping charitable contributions out of your adjusted gross income has some added benefits for retirees receiving Social Security benefits, paying for Medicare, or deriving the vast majority of their income from investments.

Additionally, there are deductions and credits that are limited to low-income households, where income is defined as your adjusted gross income (perhaps with some modifications).

For wealthy retirees, limiting AGI can ensure you pay the standard Medicare Part B premium. Premiums start climbing when a couple's AGI exceeds $176,000 for a couple or $88,000 for a single retiree in 2021.

So, using a QCD instead of taking a regular distribution and donating to charity can have additional tax advantages. That makes it the best way for retirees to give to charity, especially if they have a considerable amount of funds left in their traditional IRAs in the middle years of their retirement.