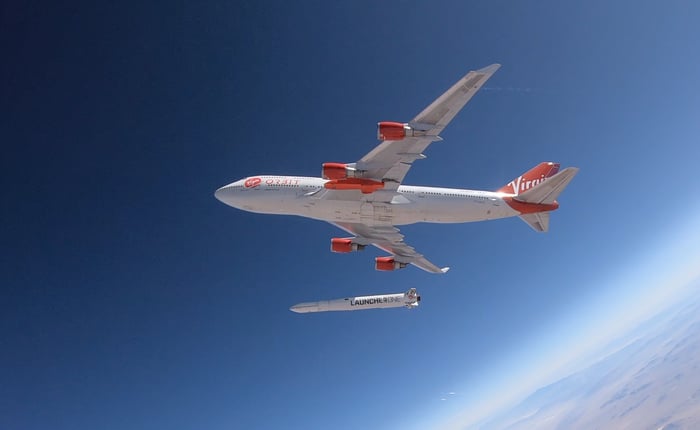 This successful rocket launcher is not named Virgin Galactic -- and that could be a problem. Image source: Virgin Orbit.

The answer, I fear, is not to be found at Virgin Galactic at all, but at its sister company, Virgin Orbit.

Over the weekend, The Wall Street Journal reported that Virgin Orbit has "hired bankers to help it go public this year through a special-purpose acquisition company, aiming for a valuation for the satellite launching start-up of up to $3 billion."

On the one hand, that could be good news -- indicating continued investor enthusiasm for space stocks. This enthusiasm seemed to come in question last month, when it was reported that a Branson SPAC known as VG Acquisition Corporation (VGAC.U) would spend its money not on Virgin Orbit, but on genetics tester 23andMe instead. But now, it seems that both Branson, and perhaps his investors, too, see further opportunity in Virgin Orbit's business of launching rockets to space from mid-air, carried to their launch altitude aboard modified commercial airplanes.

Of course, the counterpoint to that is that investors may see more potential in Virgin Orbit's satellite launch business than in Virgin Galactic's space tourism business -- and more reason to sell the latter and buy the former.

Such a view wouldn't be illogical. After all, Virgin Orbit completed its first successful space launch in January, and is now in a position to build on that success by conducting actual revenue-generating satellite launch missions. Virgin Galactic, on the other hand, just announced that it will delay its test flight program until May, potentially pushing its chances of generating commercial revenue into 2022.