Please ensure Javascript is enabled for purposes of website accessibility
Log In Help Join The Motley Fool
Free Article Join Over 1 Million Premium Members And Get More In-Depth Stock Guidance and Research
By Will Healy - Mar 27, 2021 at 9:48AM

Should investors choose the established player or the mobile-focused upstart?

Thanks to the pandemic, gaming stocks like Activision Blizzard (ATVI -0.44%) and Zynga (ZNGA -2.04%) became notable growth stories. As millions faced lockdowns and unemployment, consumers flocked to both companies' games. Now, that growth level could temporarily slow as parts of the world emerge from the contagion. The question now is whether the established gaming giant or the upstart mobile gaming company can better serve investors?

At the height of the pandemic last May, Grand View Research forecast a compound annual growth rate (CAGR) for the video game industry of 13% between 2020 and 2027.

While the contagion has probably frontloaded some growth, investors should not expect a long-term industry slowdown from the end of COVID-19. Thus, both Activision and Zynga stockholders can breathe a sigh of relief. Still, as companies that started at different times, each has taken a different path to success. 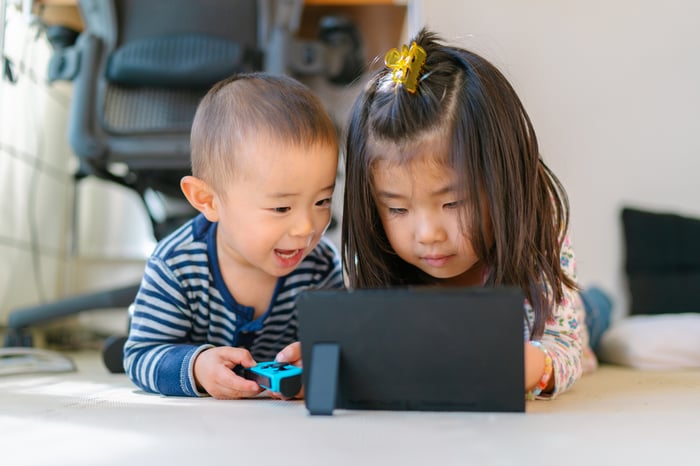 Activision had the benefit of establishing independent game development as an industry. Founded in 1979, it has built a competitive advantage based on game franchises for consoles and PCs such as Call of Duty and World of Warcraft.

Despite these successes, the company continues to evolve. As smartphone and tablet platforms became popular, Activision acquired King Digital, which brought it mobile franchises such as Candy Crush. Moreover, through Overwatch, it has pioneered the concept of competitive gaming, which stoked more interest in its games and the industry itself.

Overall, Activision Blizzard now boasts 397 million monthly active users (MAUs). This user base peaked at the height of COVID-19 in the summer of 2020 at 428 million, and fell slightly below the 2019 year-end level of 409 million by the end of 2020 as more people emerged from lockdown.

Conversely, Zynga, which started in 2007, built its reputation by quickly seeing the potential for a gaming market built on smartphone and tablet platforms. This made gaming accessible to those without bulkier, more expensive consoles and PCs, and forced companies such as Activision to pay more attention to mobile gaming.

Like Activision, its competitive advantage lies in its franchises. Though FarmVille appears to have run its course, franchises such as Zynga Poker and Words With Friends remain popular. More recently, Zynga boosted its growth potential overnight with its purchase of Echtra Games announced at the beginning of March.

Echtra can take Zynga beyond mobile gaming and facilitate cross-platform play. As the term implies, this allows gamers to play team sports across multiple types of gaming systems. Not only does this allow mobile gamers to team up with gamers on consoles but it also widens the company's overall player base. On the fourth-quarter 2020 earnings call, CEO Frank Gibeau called this an "organic opportunity to more than double the value of our company."

Moreover, unlike Activision, it strengthened its competitive advantage through a massive increase in players. Zynga's mobile MAUs rose 103% to 134 million it added many hyper-casual games through its purchase of Rollic in October of last year. Hyper-casual games are easy-to-play mobile games with simple interfaces that have become popular in recent years.

While COVID-19 may not have permanently boosted MAUs for both companies, it has helped both financially. Activision experienced a 25% increase in revenue in fiscal 2020, while net income surged 46% as total costs increased by only 10%.

Activision fell short of Zynga's 50% increase in revenue in 2020. Nonetheless, while Zynga's operating costs rose by only 36%, its overall costs still exceeded revenue. This led to a loss of $429 million for the year, more than the $281 million Zynga would have lost in 2019 had it not received a $323 million gain on the sale of a building.

Activision also comes out in better shape with debt. Its $3.6 billion in long-term debt is well below its $15 billion in equity, the company's value after subtracting liabilities from assets. The company also covers the $87 million in interest costs and $316 million in dividend payments with just over $1.7 billion in annual free cash flow.

In contrast, Zynga must turn to outside sources to cover losses. Consequently, it holds just under $1.3 billion in convertible senior notes, up from $571 million at the end of 2019. Still, debt levels remain well below the $2.9 billion in equity. Also, the company reported $410 million in free cash flow in 2020, easily paying the $30 million interest expense.

Activision's stock slightly outperformed Zynga's over the last 12 months. Nonetheless, Zynga stands out as the longer-term winner. It surged by nearly 350% over the last five years, well above Activision's 180% move higher over the same period. 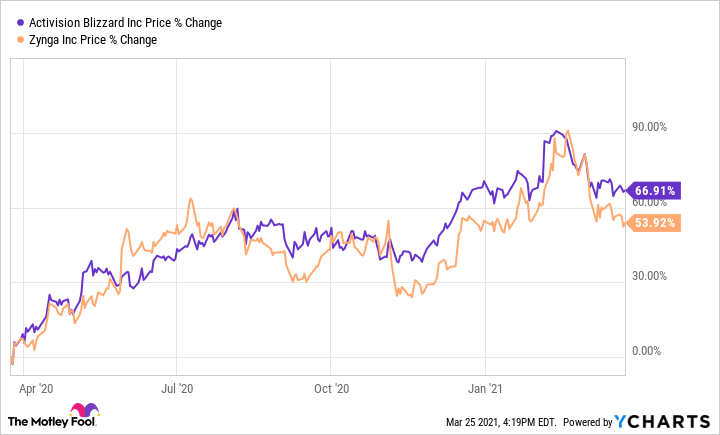 Zynga continues to benefit from the leadership of Gibeau. Its stock traded below $3 per share before Gibeau took over in 2016. As Gibeau began to produce results, Zynga climbed beyond penny-stock status in 2019 and today sells for just under $10 per share.

Despite that increase, Zynga maintains a cheaper valuation. It trades at about five times sales versus 8.8 times for Activision. Interestingly, even with Zynga's stock growth, the valuation climbed by only 9% over the last 12 months. In comparison, Activision's sales multiple surged by 35% over the same timeframe. This shows that Zynga's increase more closely reflects its expansion in revenue, indicating its value proposition remains in place amid the rising stock price.

Given the financials, Zynga looks like the better buy for investors. Valuable franchises and games across an increasing array of platforms bolster both video game stocks. However, even though it has not turned profitable, Zynga has become the faster, long-term growth story. Moreover, its increase has not significantly affected valuation. Such a phenomenon merely confirms Zynga's greater potential.