Please ensure Javascript is enabled for purposes of website accessibility
Log In Help Join The Motley Fool
Free Article Join Over 1 Million Premium Members And Get More In-Depth Stock Guidance and Research
By Zhiyuan Sun - Mar 27, 2021 at 7:00AM

Looking for a high-flying marijuana company trading at a reasonable price? HEXO might be your best bet.

HEXO (HEXO -1.67%) is a Canada-based pot grower that has has several high-flying revenue segments. Not only does it hold a leading position in the country with its dried cannabis brand, but it is also gaining traction in the international cannabis industry via new acquisitions.

Despite a 145% gain in its stock price over the past year, HEXO shares are still relatively cheap compared to their future potential. Let's look at why investors should feel very excited about what the company has to offer. 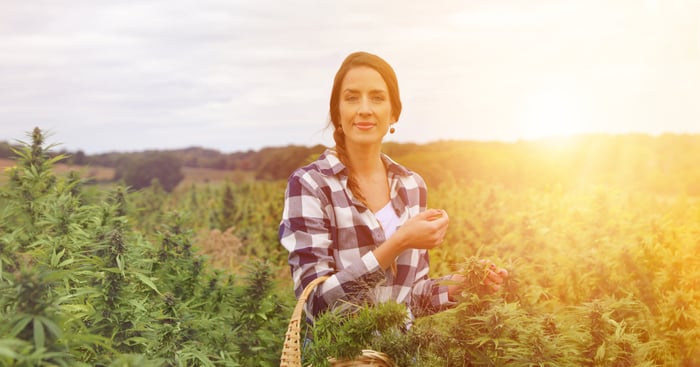 What's so special about HEXO?

In the second quarter of 2021 (ended Jan. 31), HEXO's revenue increased by a stunning 94% year over year to $26 million. The pot grower maintained its No. 1 market share in Canada's second-most populous province of Quebec. Its marijuana accounted for 49% of all sales volume in the region. HEXO's output grew as well. Also, the company is in an excellent financial position, with CA$700 million in assets to offset CA$155 million in liabilities.

The pot grower managed to sell 25,608 kilograms (kg) of dried cannabis, compared to 22,305 kg in Q2 2020. Unlike last year, the company finally managed to calculate just how much cannabis to produce and sell. It had seen negligible impairments to its assets for oversupply reasons. Over the past six months, the company cut its operating cash flow loss to CA$14.3 million from CA$85.5 million during the same period a year ago.

That kind of performance is well worth the eight times revenue investors are currently paying for its stock. What's more, HEXO is partnering with the Molson Coors Brewing Company (TAP 1.12%) to jointly develop cannabis-infused beverages. The company will receive 42.5% of all profits accrued during this venture. Since Molson has operations across North America, HEXO will be able to cross-sell its beverages directly down south, gaining exposure to the booming U.S. cannabis industry.

Despite launching less than a year ago, the company has already snatched the No. 1 beverage position in the Canadian marijuana market from Canopy Growth (CGC 5.67%). Its line of tetrahydrocannabinol (THC) drinks and cannabidiol (CBD) sparkling water generated CA$3.4 million in sales in the past quarter. HEXO's market share varied between 35% and 59% throughout this period.

One of the biggest catalysts HEXO has is its $185 million acquisition of fellow Canadian pot grower, Zenabis Global, which is set to close by year-end. Aside from the Canadian market, Zenabis also has operations in Germany, Malta, Israel, and Australia. The company has 111,000 kg per year of licensed cultivation capacity.

Although it mainly focuses on medical cannabis, Zenabis also produces its fair share of vapes, oils, sprays, gels, edibles, gummies, and hash. Back in the third quarter of 2020, the company brought in CA$19 million in cannabis revenue, compared to CA$10.6 million in Q3 2019. It is also has a positive operating cash flow, which is significant, as most Canadian marijuana producers are losing money these days.

HEXO is a busy business. It's been hard at work to connect with fantastic partners, finalize acquisitions, balance supply and demand, and establish long-lasting market control. For these reasons, I think HEXO is one of the top cannabis stocks to buy now -- or at least add to the watchlist.